24 September 2014
183
The closer the first frosts are to the Square, the more often the Ukrainian authorities work in the language. Apparently, it is extremely necessary to warm the electorate a month before the parliamentary elections. The so-called Ukrainian Prime Minister Yatsenyuk demonstrates the greatest activity in this kind of work. Understanding that there is no saving agreement for Ukraine on gas supplies from Russia, including his own fault, Yatsenyuk does everything to divert the attention of Ukrainian voters to other areas. The new mantra, which the ukropremier is now systematically repeating, is that Ukraine will by all means "get off the Russian gas needle." 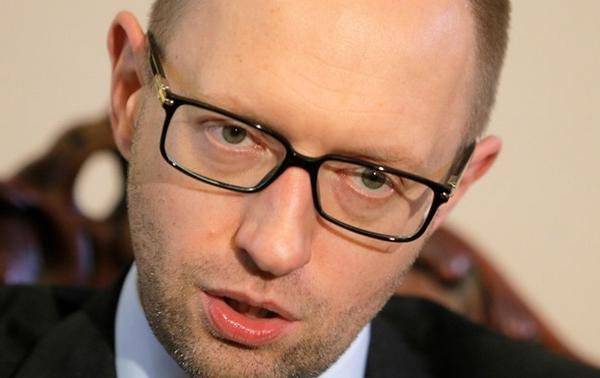 Yatsenyuk quotes a resource with a characteristic name "UkrInform":

In the ten-year term, I see that we are diversifying our sources of gas supplies so much that Russia will stop blackmailing Ukraine forever.

“I see ...” Recalls the exclamations of the quacker who drives his hands through the air, rolls his eyes, trying to convince the trusting client of his magical abilities. Yatsenyuk today is trying himself in that role. Well, what ... If people are being led, then the ukroministr uses this.

He "diversifies so much" that "Russia will stop blackmailing." The term “blackmailing” is stupid to discuss here, and otherwise “Yatsenyuk's predictions” may well be justified. Here you just need to correctly understand what Yatsenyuk means by the word “diversify”. Translated into a universal language, this can only mean one thing: Yatsenyuk will do everything so that in a decade perspective there is not even the country itself that someone is “blackmailing” with something.

In principle, before the realization of this forecast, Ukraine can “diversify” Yatsenyuk himself. After all, clever Ukrainians (well, thank God, in a neighboring state, not everyone is infected with the “bacillus” of idiocy) realize that if Yatsenyuk continues to implement his plan, then “liquefied” gas will have to be purchased in the USA or Norway with 650-750 dollars for 1000 cubes (in terms of prices for conventional (non-liquefied) blue fuel). Of course, the Ukrainian junthophiles will shout that this is nonsense, and that this will never happen, but they also shouted about coal. And with coal, Yatsenyuk has already “diversified” everything in full. Buys now Kiev coal in South Africa. This is the super achievement of the Ukrainian government, which will be included in the annals of world trade: turn around your own production and buy coal in South Africa. Applause Yatsenyuku!

And also a special applause for how Yatsenyuk is going to make a “knight's move”: buy gas from Russia, but at the same time distance itself from purchases. How is this possible? According to Yatsenyukovsky, this is how: the government of Ukraine is ready to allow large Ukrainian enterprises to independently sign gas supply contracts. That is, the promise is: we (the government of Yatsenyuk), as it were not in the business - the Ukrainian enterprises buy gas from Russia ... Why such a move? So it is known why: in order not to shine in front of the radicals on signing a contract with Russia, but to send instead another “Kuchma” - on behalf of supposedly Ukrainian enterprises. At the same time, gas from Russia will probably go to Ukraine, but Yatsenyuk will continue to build himself a hater of Russian energy carriers - the elections, plus winter ...

In general, I wonder what else Arseny Petrovich saw in his mirror-like world there, besides the “ten-year perspective”?

But the news and mantras from the world of Ukrainian behind the looking-glass are shared not only by Mr. Yatsenyuk. If the Ukrainian premier indirectly hints to Ukrainians that “the day will come and they will live without Russian gas” (though for this you do not have to wait 10 years ...), while actually concluding contracts in the shadow of the eyes of “Hero Maidan”, in the Ukrainian Foreign Ministry they “cheer up” people with other tirades. The head of the Department of Information Policy of the Ukrainian Foreign Ministry, Yevgeny Perebiynis (aka Perebeynos), told citizens that the agreement on the European association of Ukraine could begin to work from November 1.

In accordance with the final provisions of the Agreement, the provisional application will begin from the first day of the second month after the parties have transferred to the depositary, the General Secretariat of the EU Council, the relevant documents on the completion of the necessary internal procedures. If these conditions are met by the end of September, the temporary application will start from November 1 2014. The European Union will independently determine the volume of temporary use and inform the Ukrainian side about this volume, since this issue is directly related to the existing distribution of competences between European institutions and EU member states.

If we take into account that the key part of the association agreement between Ukraine and the EU is an agreement on the FTA (free trade zone), does this mean that Perebeynos passed all his chefs with giblets? After all, the bosses fared that they would begin to truly “associate” only with 1 in January 2016 of the year, and a gentleman from the Foreign Ministry of Ukraine suddenly said that the “temporary use”, and even with the submission of the European Union, would begin from 1 in November of the current year. Ran forward locomotive?

If, with 1 November, Ukraine is going to quietly (so that Russia does not see and not hear) move into a free trade zone with the EU, then it turns out that all the talk about the transition period for ukroenomics (ukronomika) is a bluff. That is, the "partners" were going to not only have to cheat up Russia, but also the actual Ukrainian producers, who just breathed a sigh of relief after the statements of the Yatsenyuk government about the temporary freezing of the economic part of the Euro-Association Agreement.