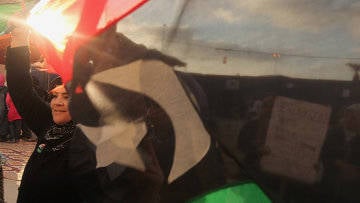 Amnesty International cannot confirm the data about any “African mercenary” fighting on Gaddafi’s side, and explosive reports via international satellite television channels about African mercenaries who raped women who were used to create panic among a significant part of the population of eastern Libya, which made them flee from their homes were fabricated.

There was not a single confirmed case of a helicopter attack on civilians and no fighters or bombers bombed people, and this completely invalidates all excuses for establishing the no-fly zone, which was decided by the UN Security Council in the form of a resolution, which, in turn, was used to justify NATO attacks on Libya.

After spending three months at the scene of insurgent-controlled territory, a staff member of Amnesty International can confirm information only about 110 dead in Benghazi, and this number includes Gaddafi’s supporters.

Only 110 dead in Benghazi? Wait a minute, we were told that thousands died there, even ten thousand. No, only 110 people lost their lives, including representatives of pro-government forces.

No rape, no African mercenaries, no helicopter attacks or bombings, and only 110 dead before the NATO bombing campaign, every reason was based on lies.

Today, according to the Libyan Red Cross, more than 1 100 civilians have been killed as a result of NATO bombings, including 400 women and children. Over 6 thousands of Libyan civilians were injured by the bombing, many of them serious.

Compared with the war in Iraq, these figures are modest, but the reasons for the Libyan war have no power whatsoever.

Saddam Hussein was the embodiment of evil, he invaded neighboring countries, starting wars that claimed, according to various sources, up to a million lives. He used weapon mass destruction (WMD) in the form of poisonous gas both against neighbors and against their own people, killing tens of thousands. He was cruel and corrupt, and when American Tanks went to Iraq, the Iraqi people refused to fight for it, simply folding their arms and going home.

Livy under Colonel Gaddafi did not invade the territory of neighboring countries. Gaddafi never used weapons of mass destruction against anyone, let alone his own people. As for the fact that Gaddafi was cruel, in the neighboring country, Algeria, in relation to Libya, the Algerian military in the 1990-s decade fought against insurgent speeches, during which about 200 thousands of Algerians were killed. This is what is called cruelty, but nothing even closely resembling it was in Libya.

In Egypt and Tunisia, Western puppets such as Mubarak and Ben Ali did not enjoy almost any support in their nations, and very few people (if anyone at all) wanted to fight and die, defending them.

Most of the Libyan people come to the defense of the Libyan government and the "leader", Muammar Gaddafi, on July 1 in a demonstration in his support in Tripoli was attended by over a million people. Thousands of Libyan youths are fighting on the front lines with the rebels, and despite thousands of NATO air strikes, as reported by real journalists at the scene of events in western Libya, their morale remains high.

In Egypt, an uproar of indignation of the masses, which resulted in the transfer of power from Mubarak to the army, began in the poorest suburbs of Cairo and other Egyptian cities, where prices for basic foodstuffs, such as bread, sugar and vegetable oil, soared dramatically and led to the spread of hunger. In many parts of poor Egyptian neighborhoods, gasoline is easier to find than clean drinking water. Medical care and education are only for those who have money to pay for them. The life of people in Tunisia is not particularly better.

In contrast, the Libyan - the longest life expectancy in the Arab world. The Libyan people have the best free healthcare system in the Arabic Ira. The Libyan people have the best free public education system in the Arab world. Most Libyan families own their own home and most Libyan families have their own car. Life is so much better in Libya than in neighboring countries that every year thousands of Egyptians and Tunisians migrated to Libya to earn money to feed their families, doing the dirty work that Libyans did not want to do.

When it comes to how Gaddafi oversaw such a tangible increase in living standards for the Libyan people, despite decades of UN Security Council sanctions against the Libyan economy, honest observers recognize that Gaddafi is more than a head taller than kings, sheirs, emirs and various dictators, who rule the rest of the Arab world.

So why is NATO starting this war against Libya?

First of all, Gaddafi was on the verge of creating a new banking system in Africa, which threatened to leave the IMF, the World Bank and various other Western banking structures in Africa. And the predatory Western loans that were used to make African economies worthless would no longer be, instead, an emerging African investment bank with a capital of 42 of a billion dollars would provide large loans at a meager or even zero interest.

Libya has financed major infrastructure projects across Africa that have begun to bind African economies and destroy the eternal dependency on Western countries for imports. Here in Eritrea, a new road linking Eritrea and Sudan is just one small example.

What finally seems to have finally tipped the balance in favor of direct military intervention by the West, was Gadhafi’s demand that American oil companies, which have long been the biggest players in the Libyan oil sector, pay Libya tens of billions of dollars in compensation for damage caused Libyan economy triggered by the United States because of the “Lockerbie affair” sanctions imposed on behalf of the UN Security Council and in force throughout the 1990s and at the beginning of the 2000s. This claim was based on evidence that the CIA paid millions of dollars to witnesses in the Lockerbie case at the trial to change their testimonies and involve Libya in the events, so American oil companies would have to pay to cover the damage from actions of their government. It's not hard to see why it took someone to have Gaddafi go, right?

And the fact that Gaddafi made it clear that he saw the future economic development of Africa in general, and Libya in particular, more connected with China and Russia than with the West, helps to understand that it was only a matter of time when the CIA put its contingency plan to overthrow the Libyan government.

NATO's war against Libya has more to do with the NATO war in Kosovo against Serbia. Nevertheless, Gaddafi still cannot be compared with Saddam or even with less significant criminals, such as criminals in the Serbian leadership. The lies of the Libyan war are worse than the lies in the Iraq war.

Author:
Thomas Mountain (Thomas C. Mountain) is the only independent western journalist in the Horn of Africa who has written and written articles from Eritrea since 2006. He was a member of the first American peace delegation headed for Libya in 1987.
Originator:
http://www.counterpunch.org/mountain07272011.html

We are in Yandex Zen
Sensational interview with a Russian officer - military adviser to Muammar Gaddafi
2 comments
Information
Dear reader, to leave comments on the publication, you must to register.