What will lead the beginning of the Iranian-Kurdish confrontation? 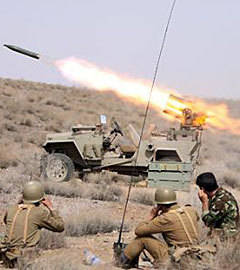 In fact, conditions have been formed for the start of a new war in the Middle East: for several weeks now fights have continued on the Iran-Iraq border between the Kurds and the guards of the Islamic revolution. The withdrawal of American forces from Iraq will only spur both sides to the escalation of the conflict, in addition, the problem of Iraqi Kurdistan will also reach a new level, that this will be - we do not know. But it could be a civil war in Iraq, a new invasion of the Turkish army, a new Iran-Iraq war — not for nothing, the Iraqi authorities in recent years have sharply intensified, with the assistance of the United States, the purchase of weapons and military equipment.


People who think that once the events take place in deep wilderness, it means they don’t touch them, they are greatly mistaken - the Kurdish problem carries a charge of enormous power, almost unresisting of the problem of Israel. This issue can blow up a huge region, directly affecting the interests of such powers as Turkey, Iran, Syria, Iraq. In addition, one should keep in mind the following factor: the oil reserves of Iraqi Kurdistan in the world of 6 are the largest.

The Kurds have always been considered difficult to control by people, a source of irritation for the great powers of the Middle Ages - Persia and the Ottoman Empire. They were able to preserve part of their identity under the pressure of Islam, the Persian Power, the Arab Caliphate and its fragments, the Ottoman Empire. After the First World War, when the British Empire and France cut the map of the Middle East on their own, creating completely artificial states, the Kurds did not receive their statehood. Although in numbers in the region they were second only to Arabs, Turks and Persians, it is one of the most numerous peoples of the planet, which does not have its own state. In all states, they were second-rate people, in Turkey they were denied the right to be a people altogether - calling them “mountain Turks”.

But the current world situation gives the Kurdish people a new chance for statehood - a unique time of great upheaval is coming. Saddam Hussein, who suppressed the Kurdish uprising by chemical weaponshanged, the central government in Baghdad is weaker than ever. The northern provinces of the country - Iraqi Kurdistan - received the widest autonomy, they are de facto independent. Moreover, this "autonomy" has an excellent economic base: oil production, developed agriculture. The economy was strengthened by a construction boom in Erbil, Dahuk and Sulaymaniyah.

But Ankara and Tehran reacted very painfully to this event - Hussein was also “unpleasant” for them, but the Kurdish question could lead to significant territorial and economic losses in their countries, knocking them out of the situation of regional great powers for a long time. Or, at least, it will be necessary to grant autonomy to the Turkish, Iranian Kurds, which also weakens them. And in Baghdad they are afraid that Iraqi Kurdistan, which is economically autonomous, will seize the oil fields and the infrastructure of Kirkuk when they gain full independence. Washington is playing a double game: on the one hand, they don’t want to spoil relations with the ally Turkey, the loyal administration of Iraq, on the other hand, it is possible to make an excellent mess for those hostile to the Americans of Syria and Iran, and Turkey to be put in place. The White House has done a lot to strengthen the Kurds in Iraq, effectively allowing them to become independent.

The Kurds themselves and their leaders saw in their latest upheavals - the wave of Arab revolutions, the problems of Syria, the increasing pressure of the Western world on Iran - their historical chance. There was a sharp intensification of their independence movement - this is evidenced by the attacks in Turkey, in Iraq. The dream of creating a big Kurdistan again captured the minds of Kurdish patriots. Moreover, apparently, they decided to strike the main blow at Iran, Turkey is the US ally, and Washington is the patron saint of Iraqi Kurds, and Iran in recent years has been a constant irritant for Western politicians and the media.

The beginning of the Iranian-Kurdish confrontation

Officially, the Kurdistan Free Life Party (PSJK) is not fighting for the independence and independence of the Kurdish regions of Iran, but for granting them autonomy. Much attention in their program, to please the Western world, is given to “democratic” issues: the replacement of the theocratic structure of Iranian society with a democratic one, and the rights and freedoms of women, ethnic and religious minorities of Iran.

This organization in Iran is banned as a terrorist, so the main method of fighting PJAK is an armed struggle, an attack on army units, warehouses, frontier posts. Tehran responded with rounds, in general, did not cross the line between the military operation and police actions. But he sharply reacted to the assassination of General Corps of the Guardians of the Islamic Revolution (IRGC) Abbas Kasemi (Kurdish militants undermined his car in the province of Kum). According to the Kurds, other high-ranking officers were killed with him, seven officers in total, including: the Corps commander at the front, Serdesht-Piranshehr, Colonel Delaware Ranjbarzade; Hadjiaga Marufi, commander of special forces on the Eastern Front.

Iran, in response, launched a military operation - heavy-armed troops (approximately 5 thousand) were deployed to the border with Iraq. Iranian troops not only fired on Iraqi territory, but also crossed its border.

There is no reliable information about the operation, the Iranian and Kurdish sides report their victories, dozens of victims. But apparently, the “lightning victory” did not work out, the Islamic Revolutionary Guard Corps reported that the operation against the “counter-revolutionary formations” would continue. It is clear that the Kurds can not resist the regular army, saturated with heavy weapons. Baghdad demanded the immediate withdrawal of the troops, “threatening” with the deterioration of bilateral relations, the times of Saddam Hussein passed - Iraq’s retaliatory attack on Iran is not possible at the present time. There is neither a true leader of Iraq, nor full-fledged armed forces; they will need many years to restore their combat capability.

But armed forces of Iraqi Kurdistan can join the battle, they have not yet participated in the clash. Their number is about 100 thousand people, it is clear that they are inferior in armament, but given their motivation (they are called "going to die"), they can cause considerable trouble to Iranian waxes. As a result, a counterterrorist operation can result in a real bloody war.

The situation is very complicated: Iran is leading the offensive; Ankara promises to prevent the creation of an independent Kurdish state, in any way; Americans are going to withdraw their forces, while they understand the complexity of the situation in the Kirkuk region, where Arabs and Kurds are ready to cling to each other's throats, they are proposing to replace their troops there with the UN contingent, but only those who do not.

There is another interesting aspect - Washington can use this conflict to strike at Iran. So, the White House administration has already accused the leadership of Iran of having links to al-Qaeda.

We are in Yandex Zen
Turkey against the Kurds. Is there a new phase of conflict ahead?
The history of the Iraqi Navy. Part of 2. Iran-Iraq War at Sea (1980-1988)
13 comments
Information
Dear reader, to leave comments on the publication, you must to register.