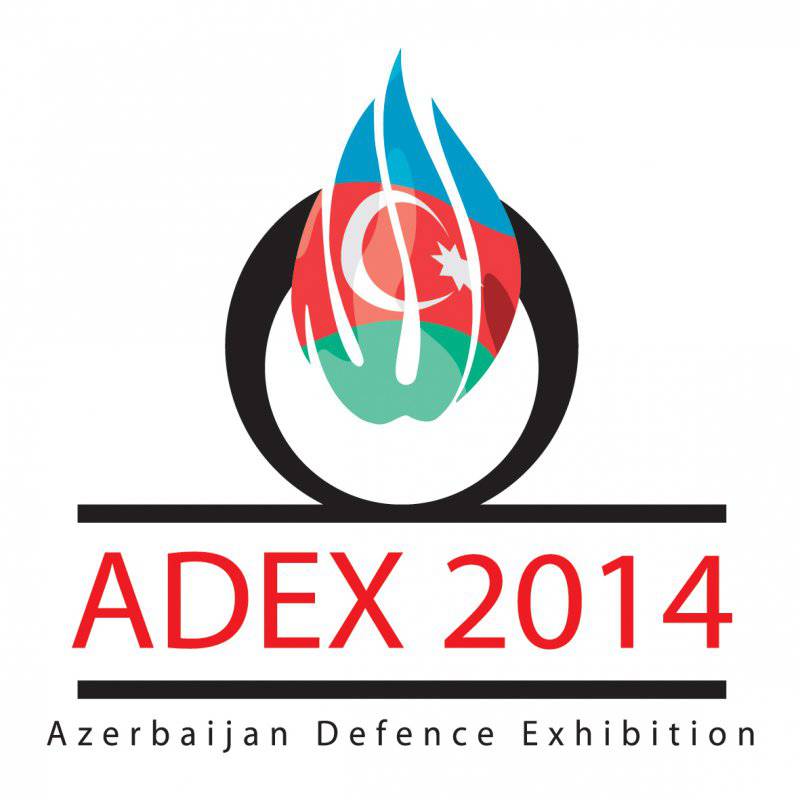 As the correspondent writes "Caucasian Knot" Faik Mejid, at the First Azerbaijan International Exhibition of Defense Industry ADEX-2014 in Baku 168 products of local military and civilian products were presented. The exhibition ran from 11 to 13 September; it displayed products of two hundred companies from 34 countries.

According to the Deputy Minister of Defense Industry of Azerbaijan, Y. Musayev, this exhibition is the first event of this format. The deputy minister also noted that Azerbaijan now produces 900 items of various products, including armored vehicles, small weapon, ammunition, unmanned aerial vehicles Aerostar and Orbiter 2M.

The exhibition featured modernized Soviet armored vehicles: the BTR-70, BRDM, BRDM-2, tracked reconnaissance and patrol vehicles. The machines can run on diesel fuel, and the BTR, instead of a machine gun, is equipped with a gun. The Matador armored personnel carrier, manufactured using the Paramount Group technology (South Africa), was also presented. Azerbaijani armored patrol cars “Gurza” are equipped with machine guns and an automatic grenade launcher.

“At this exhibition, apart from Azerbaijan, practically no country presented ammunition. Arsenals of weapons have many states. But the products of Azerbaijan were produced in recent years and made with the latest modifications. This creates the advantages of Azerbaijani products in the arms market and may interest potential buyers, ”the specialist of the defense industry of Azerbaijan notes.

September 11, on the first day of the exhibition, on the portal "Vesti.az" material appeared on the visit of Israeli Defense Minister Moshe Ya'alon to the Republic of Azerbaijan, which coincided with the date of the ADEX-2014. The visit to the international exposition was originally planned by a high-ranking guest. The fact is that the products of Israeli companies were presented at the exhibition.

An expert in the field of international relations, commentator of the Israeli radio and television Arie Gut, noted that the first visit of the Israeli Defense Minister to Azerbaijan proves the fact of strengthening the strategic relations between the two states. Gut said: “Azerbaijani-Israeli relations are very important strategic for both countries and peoples. The visit of the Israeli Minister of Defense to Azerbaijan is a new stage in the development and strengthening of relations between Israel and Azerbaijan. Today it is no secret that Israeli companies are actively and effectively participating in the construction of the Azerbaijani military industry. Israel is one of the main buyers of Azerbaijani oil in the world market. The State of Israel is an important strategic partner of Azerbaijan in the supply of the most advanced technologies in the oil and gas, telecommunications and agricultural fields. ” 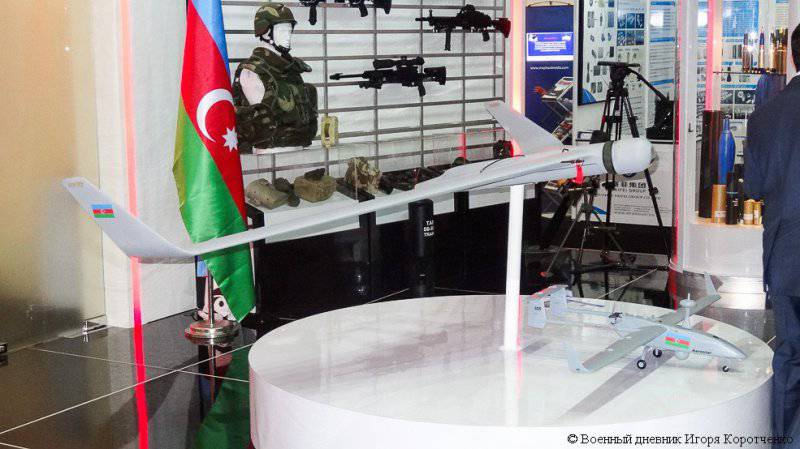 Add to this that Mr. Yaalon held talks not only with Ilham Aliyev, but also with his Azerbaijani counterpart Zakir Hasanov and foreign minister Elmar Mamedyarov. At the meetings, issues of bilateral cooperation were discussed.

Military cooperation is being strengthened with Turkey.

The general director of the Alov plant of the Optical-Mechanical Production Association of the Ministry of Defense Industry of Azerbaijan, Kemal Askerov, said that the plant produces fourteen defense products. This was reported by 16 September agency "Trend".

In addition, the plant produces two types of optical sights for sniper rifles: “These are optical sights for firing at close and long distances. Similar rifles “Istiqlal”, which is in service with the Azerbaijani Armed Forces, are equipped with similar optical sights. These sights allow firing at targets at a distance of 2000-2400 meters. ”

He also informed the agency that the plant produced three types of collimator sights for small arms melee. On the "Alove" and day-night optical sights for grenade launchers. According to the CEO, the plant also has customers abroad: the enterprise has orders from the Turkish company ASELSAN, and also cooperates with Russia, Romania, Belarus, Iran, Israel and other countries.

It clarifies "Day.az", Kyamal Askerov said that the plant received orders from several structures for the production of thermal imagers. Thermal imagers will be manufactured with the assistance of the Turkish company ASELSAN mentioned above.

“Production of thermal imagers will be organized as soon as possible. They are mounted on small arms, including sniper rifles, ”noted Mr. Askerov. 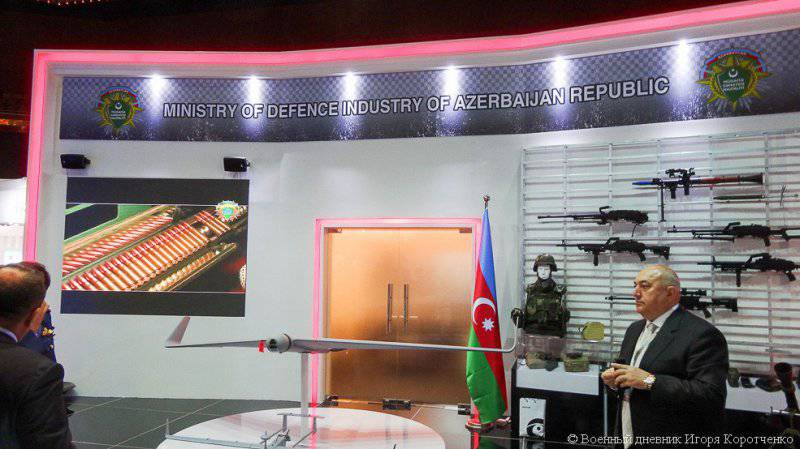 Analyst "Military Industrial Courier" Nikolai Novichkov writes that Azerbaijan is focused on increasing the production of military products. This was announced at the ADEX-2014 exhibition by Minister Yavar Jamalov.

According to him, the volume of exports of Azerbaijani military products last year amounted to about 96 million manat (123 million). It is planned to increase the value of this indicator. The minister said that 2013 million manat (254 million) was allocated for the development of the national defense industry in 325,12.

“In 2009, at one of the expositions in Istanbul, we presented 27 defense products,” the analyst quotes the minister. - The last time, at the April DSA-2014 exhibition in Malaysia, is already 132 names. The range of our products is increasing from year to year. ”

Yavar Jamalov noted that Turkey, Belarus and Russia were the main buyers of military products in 2013.

According to the minister, companies from Singapore and Malaysia will carry out marketing of Azerbaijani products in Southeast Asia.

In 2014, the completion of tests and the adoption of their sniper rifles are expected: the Mubariz semi-automatic rifle for the Russian cartridge 12,7х108 mm; rifle "Yalguzag" chambered for 7,62x51 mm NATO.

Azerbaijan has established a licensed production of three pistols developed by the Turkish company Tisas and a revolving grenade launcher caliber 40 mm produced by the Serbian company Zastava Arms.

Also in Azerbaijan, the Kalashnikov machine gun, called UP-7,62, was upgraded (a shortened version for special forces units - HP-7,62).

As for the UAV, Novices indicates that Azerbaijan has achieved some success in this area.

“In 2014, we export 100 kits to one of the NATO member countries. The contract includes UAVs of the Orbiter-2M type (Orbiter-2M) and Aerostar-BP (Aerostar-BP), ”says Minister Jamalov.

The publication notes that both of these drone are the development of the Israeli company "Aeronautics Defense Systems, Ltd.". They are produced under a license by the AZAD Systems joint venture created by the Azerbaijani Ministry of Defense and an Israeli company in Baku.

In the future, international cooperation is expected to expand, including with Turkey. It is planned to start production of 107 and 122 mm caliber missiles in cooperation with the Roketsan company. The decision of the government of Azerbaijan on this issue is expected.

“Through our activities we will demonstrate that Azerbaijan is a country that will have its say not only in the oil industry, but also in the defense industry,” said Yavar Jamalov.

Thus, Azerbaijan not only expands international cooperation in the field of military products and promotes new products to international markets, starting in Southeast Asia, but also organizes production of its own products, announcing the opening of new enterprises and the construction of factories.