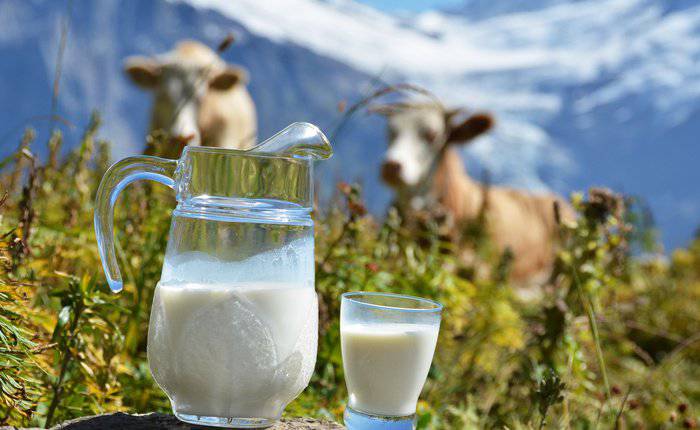 The recent decisions of the Russian leadership regarding the entry of Ukraine into the EU economic space leave no doubt: Russia will take all measures established by international agreements to protect its market from unscrupulous European suppliers. Meanwhile, Ukraine has long become a kind of "black hole" through which products penetrate into Russia, which is not only not Ukrainian in origin, but also simply ruining Russian producers.

Russia's response to the sanctions imposed by the European Union, the United States and some other countries, in the form of a ban on the import of a number of food products from these countries, caused inspiration in the camp of domestic producers and processors of agricultural products. Why, for the first time in several decades, the Russian peasant seemed to be able to dramatically increase production ...

In addition, Russian Prime Minister Dmitry Medvedev 19 September signed a document on the introduction of customs duties on Ukrainian goods. These fees will be charged only if the Kiev authorities violate the agreements reached earlier and begin to apply the articles of the economic part of the association agreement between Ukraine and the European Union earlier than 1 in January 2016 of the year.

Prior to this event, Russian President Vladimir Putin personally held a meeting of the State Council, at which specific decisions were made that would dramatically increase the share of Russian food in the market. After such attention, it would seem, the Russian manufacturer can only invest and delight the buyer with its high-quality products ...

Since Soviet times, domestic foodstuffs have been lost in terms of packaging and design. The quality was almost always higher than any criticism, the level of content of all kinds of harmful substances, as a rule, was even much lower than permissible.

In recent years, due to the efforts of the domestic processing industry, the lag in this industry has been largely overcome. Russian food products, which are in good demand, in quality and beautiful packaging has increasingly begun to replace imported products on counters.

Since it was a question of a huge consumer market with more than 140 million people, foreign competitors were not indifferent to it. Not being able to defeat the Russian manufacturer in a fair fight, they began to use such methods that you couldn’t just call unfair ...

And Ukraine helped and helps them in this. It should be noted that for all the stay of this former Soviet republic in the free trade zone of the Commonwealth of Independent States, a typical algorithm has been developed for the illegal entry of foreign companies into the Russian market.

In short, it consists of the following: a foreign company first creates a “daughter” on the territory of Ukraine, then imports its products or raw materials there, often as “give-and-take”.

After that, products or raw materials are obtained from the relevant Ukrainian authorities, documents indicating that they are of allegedly Ukrainian origin. Accordingly, when crossing the Ukrainian-Russian border, such goods are not subject to customs duties, which, of course, reduces their price, increases competitiveness and at the same time leads to the ruin of the Russian manufacturer. Here is the Slavic "brotherhood" ...

It would seem that the Federal Customs Service, given the highest level of competence of its employees, would have no difficulty in finding the truth and blocking the way for fake “Ukrainian” goods to the Russian market. However, the reality is a completely different picture. And it remains only to guess why the customs officers do not hear either the vote of the President of the Russian Federation or the instructions of Prime Minister Dmitry Medvedev.

Packing "a spoon of tar" in the dairy sea

The Russian dairy industry produced 2013, 30 million tons of milk in 7 year. After the introduction by the Russian side of the ban on the import of many types of milk and dairy products associated with the response to the sanctions of Western countries, the production of domestic dairy products began to show an upward trend. And, of course, these products should be provided with high-quality packaging for transportation and further placement in retail chains. And then the financial-industrial group “Elopak / Ferd Group” from Norway, represented in Russia by the subsidiary company Elopak, appears on the scene.

Proud Scandinavians have already won over 50% of the carton packaging market for fresh dairy products and their share continues to grow.

Only in the first half of 2014 of the year, the sales growth of the financial and industrial group Elopak over the same period last year exceeded 20% with a tendency to further increase.

By the way, back in 2007, the Federal Antimonopoly Service in its study noted that Elopak FPG sells packaging material at dumping prices.

In 2013 — 2014, the FPG “Elopak” in leased premises installed and launched equipment with a declared production capacity of over 1,6 billion packs, which exceeds 80% of the volume of the corresponding packaging market in the Russian Federation. In order to implement its plans to monopolize the FPG market, Elopak temporarily offers Russian producers of drinking dairy products such packaging prices that are at the level of the costs of the Russian producer only for (!) Raw materials.

For example, the average prices in Russia for 1 packaging per liter, taking into account the dominant position in the Russian market of Elopak FIG, are 40 − 45 euros per thousand. In the EU countries (including our closest neighbors - Finland, the Baltic countries, Poland), Elopak sells the same package for 55 − 65 euro per thousand.

What allows "Elopak" to offer its products in Russia at such low dumping prices?

There are no miracles here: “Elopak” simply imports from the Ukrainian factory “Elopak-Fastov”, which belongs to the same financial and industrial group, products, where the cardboard is processed into finished packaging. It, Russian manufacturers suggest, in quantities estimated at hundreds of millions of pieces a year, has already been imported into Russia for about 10 (!!!) years without paying duties on the basis of documents that do not correspond to their true origin and are supposedly produced in Ukraine.

Surprisingly, however, such an aggressive trade policy of the Elopak financial and industrial group still remains without the attention of the relevant Russian departments. But a similar situation a few years ago led to the closure of Elopak's competitors in Europe and Canada: someone was bankrupt, someone was bought for a pittance and his equipment was destroyed so that a new competitor would not appear. And this is called food security?

Mysterious role of the Federal Customs Service of Russia

Back in September 2013, the Russian packaging manufacturers applied to the Russian Federal Customs Service claiming that Ukraine was recognized as the country of origin of packaging, as this allows the Elopak FPG to use a zero customs rate, thus lowering the customs value of cardboard blanks imported from Ukraine. And this, in turn, is a blatant violation of Russian customs legislation.

The share of the cost of imported raw materials - cardboard and polyethylene produced by the EU (commodity goods) - is 70 − 80% in the cost of packaging, which directly contradicts the ad valorem share rule, which was paid to the attention of the Federal Customs Service of the Russian Federation.

The rule of "ad valorem share", when the percentage of the cost of used materials or value added reaches a fixed limit in the price ex-factory of the supplied goods.

The direct damage to the budget of Russia from such illegal actions of the FPG “Elopak” amounts, by the minimal estimates only, to millions (!) Euros, which the state does not receive in the form of customs payments and taxes.

If we add to this the revenues of Russian packaging manufacturers, which are constantly decreasing due to the attack of Elopak, and, as a result, the reduction of their tax deductions to budgets of different levels, the picture becomes completely bleak ...

In the event of failure to take measures, the social tensions will sharply increase in domestic enterprises - packaging manufacturers, since a large reduction in jobs will be coming.

In the meantime, no answers have been received on the appeals of domestic manufacturers either from the FCS of Russia or from the TsTU FCS. The applicants are only informed that "the inspection activities are carried out to carry out customs operations with the above goods." Recall that this epic has been going on for more than (!) A year ...

The last response of the Central Customs Administration of the Federal Customs Service, dated 6 August 2014, generally says that the question of the validity of the provision of tariff preferences in Russia for FIG "Elopak" will be decided on the basis of certain decisions and documents of the authorized bodies of Ukraine.

An interesting picture emerges: Russian entrepreneurs in their appeals to the Federal Customs Service accuse the Elopak financial-industrial group of abuses related to the violation of the Russian customs legislation, and provide obvious evidence and calculations. And the Federal Customs Service in response reports that it will clarify the circumstances of the scandal with ... the authorized body of Ukraine, which issued certificates of origin of goods!

Simply put, Russian customs officials offer Russian manufacturers, indignant at the facts of unfair competition from the Elopak financial industrial group, which Ukraine assists in every way, to accept as the ultimate truth ... the opinion of the very Ukrainian body that our manufacturers directly suspect of falsification of documents!

It remains only to ask one question: what really is the cause of such a touching "love" of Russian customs officers to the Ukrainian authorized body that issued certificates to Elopak? Where does such "sensitivity" come from? And how does this happen correlate with the latest requirements of President R. F. Vladimir Putin regarding food security and the need for an economic breakthrough in the next two years?

The actions of Elopak have already led to the monopolization of this segment of the Russian market, the creation of discriminatory conditions for access to the dairy market for Russian producers of similar packaging, thereby violating Art. 10 of the Federal Law No. 26.07.2006-FZ on the Protection of Competition No. 135. Due to unfair competition, Russian enterprises are already facing the issue of shutting down production, which will lead to full control of the Norwegian FPG Elopak over a larger share of the socially significant food market in the Russian Federation, and ultimately jeopardize the country's food security and sovereignty.

The question of the vital activity of hundreds of dairy plants from Kaliningrad to Vladivostok, providing Russian citizens with one of the staple foods, Russian industrialists believe, will depend on decisions made outside of Russia, namely, in Norway, which is known to be a member of NATO ...

In conclusion, it remains only to note that, in all likelihood, such schemes of ignoring Russian customs legislation apply not only to packaging, but also to many other goods coming from the territory of Ukraine. And the expense of losses of the Russian budget in this case is no longer in the millions, but in the hundreds of millions of euros ...