M. Khazin: "Could there be peace in Ukraine?" 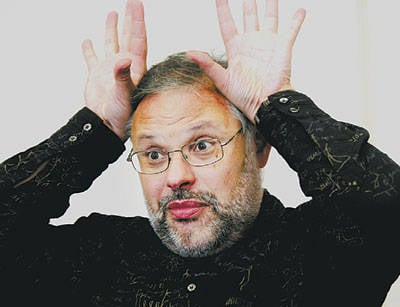 The devaluation of the ruble and the “Yevtushenkov case” scored all of our information space, which is why I want to step aside from them and return to a more important topic. Namely, under what conditions in Ukraine can there be peace. But only the real world, that is, without genocide, national “purges”, bloody dictatorship, and without disintegrating the country into many small feudal principalities. And to answer this question, first of all, you need to look at Kiev and Donetsk.

They must be in the same state. But the tens of thousands of dead and overt genocide that many political forces in Kiev are propagandizing today (and the phrase: “Get the Russians in Muscovy” aimed at people who have lived in the territories where they live for centuries, from the point of view of international law It is precisely genocide, more precisely, ethnic cleansing) that makes such “cohabitation” in the framework of a normal state impossible. Donetsk and Lugansk (and Odessa, by the way, it will only be expressed somewhat differently) will never give up their right to demand punishment for those responsible for the massacres of civilians, and Kiev nationalists will never stop saying words like “fried Colorado female” or something else Someone as sweet and humane.

Theoretically, Kiev could calm down, but only in one case - if steady economic growth began there. Then nationalist slogans could be swept under the rug and begin to divide the financial flows, but then Kiev got into a trap with its own hands. The fact is that economic growth there can only begin as a result of cooperation with Russia and the Eurasian Economic Union. Just like that. Otherwise there is no chance. There is not even a special chance for the development of agriculture, it is clearly seen in Bulgaria, where the climate is even better than in Ukraine. Anyway, it is impossible to compete with Turkey on equal terms. And when the association with Eurosos comes into force, it will be impossible to limit Turkish agricultural products - and only the own garden will be profitable to process. Just look at the brothers - Moldovans.

But since Kiev adopted a rigidly Russophobic model, it has no chances for economic growth. The EU has no money and, as the crisis develops, there will be less and less, and if you look at the economic future of the world more optimistically (there are no objective reasons for this, but let's assume this option), then they will most likely help Eastern Europe and the Baltic states than any Ukraine. And here, as they say, nothing personal, only business.

And this means that Kiev nationalism is not going anywhere, since otherwise it will not be possible to retain power in the current regime. Moreover, he has already achieved some success, the United States imposed sanctions against Russia and forced it to do its allies in the EU and around the world. There is only one problem - how much time are they willing to keep these sanctions for the sake of Ukraine? Problems in which they will continue, because coping with the growth of democratic sentiment in the South-East (and he is fighting for freedom and democracy, strange as it may sound from the point of view of modern Western propaganda) can only be a military force. And another question is whether it will work.

In general, as destructive economic processes develop, the degree of internal confrontation in Kiev will increase all the time, as those who want to live under his “care” will become less and less, the stability of the Ukrainian state will melt like shagreen. And it will become more and more aggressive. That is, we get a contradiction with the stated at the beginning of the thesis that we want to understand whether peace can prevail in Ukraine.

I note that I did not say nothing about nationalists in general, but about the Kiev nationalists. The fact is that the nationalists in Galicia are very different from Kiev. The latter always had some sources of existence (the USSR budget, the budget of Ukraine, and so on), but the former always had to be much more pragmatic. And in the past tense they could not understand that they could not keep Kiev for themselves. Since any power in Kiev, to the extent that, at the very least, it is settled down, it will, first of all, beat out not Russians in the Donbas, but real ideological nationalists. What today, by the way, Poroshenko is excellent and does. But it was clear before, I wrote it at the beginning of the year.

For Kiev, nationalism is not an idea (which, moreover, will not really please the EU), but an instrument. Ideological nationalists will never be needed there, cynics are needed, ready to pronounce convenient slogans to control budgetary and gas financial flows. And therefore, having looked at the situation in recent months, the ideological nationalists (which we have under the conditional name “Right Sector”) began to more and more consider the issue of separation from Kiev. Moreover, before Kiev threw them budget money (received from the Donbass and other Russian regions), and now there was nothing to throw.

But Galicia itself cannot separate - Kiev, for which the slogan of the “unity of Ukraine” has become basic, will never agree to this. So, besides the militia in the Donbass, in Ukraine, a new force is gradually emerging, interested in the collapse of the country. And thus, from the above, we get the following picture of the future of Ukraine.

If the militia of the Southeast and the nationalists of Galicia agree, they will dump the power in Kiev. In this case, of course, the supporters of the USSR, that is, the friendship of the peoples within the framework of the mini-empire, that is, the militia of the South-East, will finish with nationalism and restore peace in Ukraine. But here Galicia, in gratitude for the help, will receive a relative (within the confederation) or rather full independence. Because it is difficult to imagine a state in which some schools teach that Bandera is a fascist criminal, and in others that he is a hero. But the rest of Ukraine will be a single peaceful state, which, of course, is part of the EEU.

But if an agreement is not reached, and the militia cannot win (circumstances or external forces), then an increase in confrontation in Kiev will inevitably lead to a split of the country into separate feudal principalities. With an appropriate standard of living and management methods. While there are five of them: Novorossia, “Getmanshchina” (with the center in Kiev), the new “Khazaria” (controlled by Kolomoisky, Galicia. Well, separately, a very small piece, Transcarpathia, which is likely to be torn apart by neighboring countries .

But no one said that the process of disintegration will not be continued. Who does not believe - read Bulgakov, the mindset of the people in Ukraine has not changed much since then. How a simple person will live at the same time is scary to even describe.

And we get that if we want a single (relatively, that is, according to the situation of last year, without Crimea and Galicia) Ukraine, peaceful and prosperous, then it is necessary that the militia of the South-East take Kiev. And if this does not happen, the war will continue. There is simply no chance of its termination in this case. As for the preservation of Ukraine. Unfortunately.