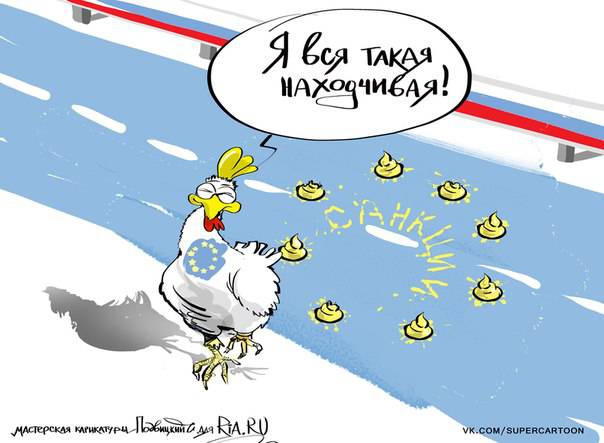 Western economic sanctions against Russia are part of a broader phenomenon, namely economic war. One of the blows of such a war was, for example, the decision of the Hague court that the Russian Federation should pay compensation to 50 billion dollars to former foreign investors of the Yukos oil company. This "time bomb" was ready several years ago, but it blew up exactly today. There is no doubt that in the very near future, Washington, relying on the FATCA law (the law on taxation of foreign accounts), will start beating on Russian banks, imputing on them “complicity” to American legal entities and individuals who evade taxes. The penalty in this case may be, for example, a fine in the form of an automatic write-off of 30% of the amounts of financial transactions passing through the US banking system. For the sake of victory in the economic war against Russia, America may also begin a curtailment of the program of “quantitative easing”: this will immediately lead to the fact that foreign investors rush from Russia to the ocean, collapsing the Russian stock market. Washington's attempts are also possible, acting with the help of the leading banks of the Federal Reserve, at least for a short time to crash the oil market and create the situation in which the Soviet Union found itself in 1986 (sharp reduction in export currency earnings). The list of methods and means of waging economic war in Washington is extensive, and many of them were tested during the Cold War against the USSR.

The Russian response to Western sanctions is usually considered in the plane of counter sanctions, such as, for example, with the ban on the import of agricultural and food products. This symmetrical measure (counter sanctions in response to sanctions) undoubtedly yielded results, but in the current situation it may turn out to be insufficient. The situation is such that it will have to act outside the box, using the best domestic and foreign experience in economic wars, electing an asymmetrical response that allows you to achieve complete victory. This article discusses two possible asymmetric responses of Russia to the Western sanctions policy.

Exit from the World Trade Organization

Estimates of what damage suffered and will still be borne by Western farmers and processors of agricultural products after the retaliatory sanctions of Moscow are different. Figures starting from 5 billion euros, there are estimates in 10 and even 20 billion euros. However, the question is not in concrete figures. The question is that today's losses of foreign commodity producers are in fact those damages which, as a result of timely measures taken, were avoided by Russian commodity producers. These are the very damages that arose among Russian farmers after Russia's accession to the WTO two years ago, when a significant part of the Russian market was given to foreigners. Today, justice has triumphed, but the farmer fears that this is not forever, and therefore he does not hurry to invest in the expansion of production. The increase in production is mainly due to unloaded capacity. And this is usually only 10-20%.

Begs for more radical solutions. At a meeting of the State Council of the Russian Federation on 18 September, President V.Putin raised the issue of WTO activities. He called Western sanctions against Russia a violation of the basic principles of the World Trade Organization. “The restrictions imposed against Russia are nothing more than a rejection of the basic principles of the WTO by our partners,” Putin said. “The principle of equality of conditions for market access to countries is violated, the most favored-trade regime is ignored, and the principle of fair and free competition is ignored.” The President stressed that all this is being done without any observance of WTO rules. In fact, Putin said, a group of Western countries allowed itself to unilaterally “strike out” a number of principles and rules of the WTO for Russia, which, the Russian president recalled, is among the six largest economies in the world. Continue this thought.

The behavior of some WTO members is in flagrant contradiction with the norms not only of the organization, but of the whole international law. The unilateral sanctions of the USA and Great Britain are illegitimate; they have not received the approval of the UN Security Council. According to the UN, at the beginning of the 21st century, these two countries applied unilateral economic sanctions against countries in which 52% of the world's population lived. Why does the WTO close its eyes to the fact that there is no trace of free trade in the world? Why has the WTO never raised the issue of punishing the United States and Britain? Meanwhile, the WTO has various forms of penalties. I believe that Russia, as a full member of the WTO, has the right and should raise the issue of excluding these two violators from the organization. And in this case, it could continue to remain in the ranks of the WTO. And if this fails, then just leave the ranks of the WTO. It is said that the procedure for withdrawing from the WTO is complex, which, they say, will have to pay astronomical sums of compensation and fines. The question is, why would Russia fulfill the complex exit rules if the organization does not live by the laws, but “by the rules”? Either all comply with WTO and international law, or Russia is free from obligations. And if Russia withdraws from the WTO, the Russian commodity producer, with a sigh, will be able to give a worthy response to the initiators of the economic war. It is said that there was no precedent for quitting the WTO. Why not create a precedent that, according to some signs, other members of this organization are ready to use? Especially since this is not going anywhere. There are real alternatives, including the Customs Union (CU). It is not excluded, by the way, that with such a step Russia will warn its partners in the CU of Belarus and Kazakhstan with joining the WTO.

Declaration of default on foreign debts

The financial situation in Russia today is not easy. The depreciation of the Russian currency unit signals an increased demand for foreign currency in the domestic market. And this demand is generated by the global situation. In particular, investors are waiting for the curtailment of the program of “quantitative easing” in America and the expected increase in interest rates in the US market “are packing their suitcases” and changing rubles for currency. As a result of economic sanctions, many Russian banks and companies lost the opportunity to refinance their debts by obtaining new loans and credits (they are allowed to use only very “short” loans on the world market). As during the last financial crisis, there was a risk of bankruptcies of Russian banks and companies or their transfer under the control of foreign investors and creditors. Five years ago, this was avoided because the government came to the rescue, the Stabilization Fund was “printed out”, from which Russian businessmen received the vital currency and managed to survive.

However, today the situation is different from that in 2008-2009. In the second half of the last decade, an interesting picture was observed: the sum of Russian international currency reserves almost exactly coincided with the value of the external debt of the Russian Federation. I do not think it was an accident. It was a kind of planning, which provided for 100-percentage coverage of Russia's external liabilities with its foreign exchange reserves. There is no doubt that it was not the monetary authorities of Russia that were engaged in this planning, but foreign creditors. In recent years, foreign debt began to overtake the size of the currency reserve of the Russian Federation. Thus, in the middle of 2014, the external aggregate (public and private) debt of the Russian Federation reached 721 billion dollars, while international reserves amounted to 467 billion dollars, including the currency part (without gold) - 423 billion dollars. It turns out that the degree of coverage of Russian foreign debt with foreign exchange reserves amounted to only 58,7%. For the debtor, this is an uncomfortable situation. But for lenders, it is very promising. You can take the debtor with your bare hands. If you push him to the end, he will not be able to fight back. The reserve fund and the National Wealth Fund may not be enough to repay external liabilities. I believe that it is here that we should expect a strike in the economic war of the West against Russia.

It is necessary to act in this situation quickly, ahead of time, outside the box. Namely: to declare a default on external liabilities, not waiting until Western creditors begin to gut Russian companies and banks. Each default is unique in its own way. And this will also be unique. It will be announced not because of the inability to repay its obligations, but because of the fact that the West puts Russia in a deliberately unfavorable financial and economic position with its sanctions. Here is the same situation as with membership in the WTO: why should Russia comply with the conditions of legal documents (agreements on loans and borrowings) if we are rude to us, ignoring the fundamental principles of international law? Almost a hundred years ago, the Soviet government announced that it was refusing to pay the pre-war debts of the tsarist government and the military credits of the tsarist and provisional governments (for a total of about 18 billion gold rubles). By the way, for such a step there were very weighty grounds of a legal nature. It was a preventive default, although no such thing existed yet. I think we will have to remember the experience of Soviet Russia, against which the West waged an almost continuous economic war.

The next step after declaring a default may be setting the conditions for the West: discussion of the issue of Russian foreign debts can only begin after the complete abolition of economic sanctions against Russia. And if this condition is met, claims for damages that Russia incurred as a result of sanctions may be made. I remind you again history: in 1922, at the international conference in Genoa, the West "rolled out" Soviet foreign claims on 18 billion evils for Soviet Russia. rub., and Moscow responded with counterclaims to the West for 39 billion evils. rub. These were the losses and lost profits that Russia suffered as a result of the intervention of the “allies” and the economic blockade organized by them.

If the partners of Russia are ready to continue to cooperate with us, we will probably suggest that they restructure our foreign debt, taking into account the “troubles” that they brought us by imposing their own economic sanctions.

Other asymmetric responses can be offered, but perhaps the most effective of these will be the import substitution that President V. Putin spoke about at the September 18 Council of State. Speaking in other terms, it is about industrialization. And here Russia has something to learn from itself. For ten years (1929-1939) in the course of industrialization in the USSR almost 10 thousands of enterprises were built. The country received a powerful, independent economy, thanks to which it emerged victorious from the Second World War.