Why was the state defense order disrupted? 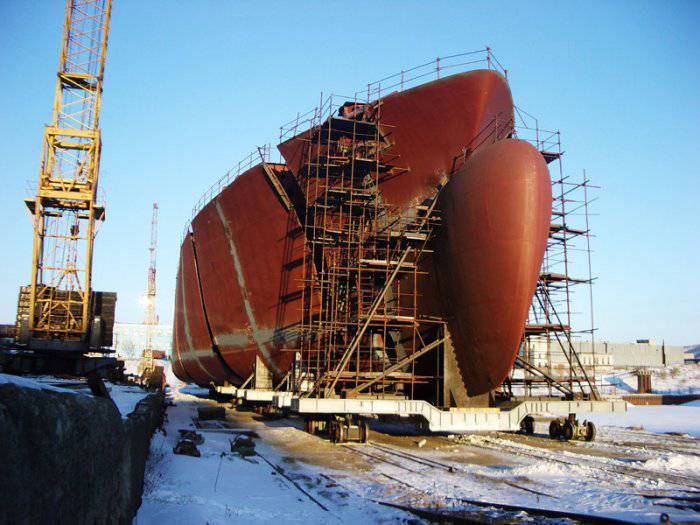 A criminal case has been opened for disrupting a state defense order against the leadership of one of the largest shipyards in Russia. Experts explain the problems that have arisen at enterprises of the Military Industrial Complex as follows: since Russia still has Soviet-made weapons at its disposal, the Russian Ministry of Defense is not interested in executing state defense orders.

The other day, the management of the shipyard “Severnaya Verf” announced information in which it publicly explained its position in response to claims made by law enforcement agencies in connection with a broken state defense order.

According to the press service of the company, the main reasons for the delay in the construction period are the lack of funds provided by the state budget to finance the state defense order, and the fact that the customer made significant changes to the design documentation during the construction phase. In addition, the managers of Severnaya Verf declared their readiness to solve problems of building and delivering ships by attracting borrowed funds as soon as possible.

The 75% share of the state shipbuilding program in the part of surface warships is performed for the Ministry of Defense of the Russian Federation at this shipyard. In the construction projects there are four corvettes, two frigates, as well as a special communications vessel.

In the Baltic, today they continue to conduct factory tests of the corvette called "Savvy". According to the government contract for the construction of the ship, the deadline for the delivery of this corvette will expire in 2011 year. All construction and testing works that were scheduled for the 2010 year were successfully completed by decision of the First Deputy Defense Ministry of Russia.

In addition, two more corvettes are in the process of construction - “Resistant” and “Boyky”. According to the press center of the Severnaya Verf plant, during the construction of the Boyky corvette in 2010, all the works were completed on time, despite a significant increase in their volume. This was due to the demand of government customers to reduce the time of delivery of the ship by three years. Moreover, the scope of work on the “Resistant” corvette project, planned for 2010 year, was also completed on time. In this case, the plant had to agree on a new schedule, which took into account a serious reduction in the time of delivery. Again, this was due to the demand of the Ministry of Defense of the Russian Federation to postpone the delivery of the ship for two years - from 2014 to 2012 year.

The management of the Severnaya Verf shipyard is convinced that in order to fulfill the tasks set, first of all, a solution to the financing problem is required. Also, for the successful completion of construction, testing and delivery of assigned orders, the results of those works that were carried out by the Ministry of Defense of the Russian Federation with the developers of the latest equipment, which, in turn, was created not only for these, but also subsequent ships, should play an equally significant role. Naval fleet.

It should be noted that other orders of the Ministry of Defense are carried out in strict accordance with the approved completion schedule.

Not so long ago, in May of this year, the Northern Shipyard received additional agreements for the construction of ships, which has a direct connection with the additions to the technical specifications for their design. In particular, these agreements define the deadlines for the delivery of frigates under the names “Admiral of the Fleet of Kasatonov” and “Admiral of the Fleet of the Soviet Union Gorshkov” - this is November 2014 and November 2012, respectively.

So, last week, the investigating authorities opened a criminal case against the management of OJSC Shipbuilding Plant Severnaya Verf. There are accusations of disrupting state defense orders associated with the abuse of the powers of employees of the enterprise. There are also data of the supervisory authority confirming the information about the initiation of an administrative case against the head of the Northern Shipyard. According to the prosecutor's office, a warning was issued in his address and an appropriate submission was sent.

In other words, the law enforcement agencies revealed not only the facts of violation of the legislation on civil defense and industrial safety, but also non-compliance with the legislation that regulates the activities of joint-stock companies.

Anatoly Dmitrievich Tsyganok (a well-known political analyst of Russia and the head of the Center for Military Forecasting) considers the explanations of the administration of the shipbuilding plant to be unfounded. Moreover, in his opinion, the main culprit in the occurrence of all problems is the military department. As mentioned above, Russia still has weapons from the production of the Soviet period, as a result of which the Ministry of Defense of our country is not interested in the fulfillment of the state defense order. It should also be noted that the Ministry of Defense orders the equipment only secondarily. Anatoly Dmitrievich assumes that there is a definite agreement between the Ministry and Rosoboronexport. It is likely that Rosoboronexport makes orders for equipment in the first half of the year, and the military department only in the second. Thus, it may well be that the Ministry of Defense for the first six months simply does not pay for any orders. Unfortunately, this looks like a real corruption scheme.

A. D. Gypsy also explains that Russia's state defense order is classified as 70%. For example, in the United States of America only 4% of the state defense order are closed. This is the main reason that people who have the opportunity to place an order make “outside”, and Russian financial intelligence cannot control the purchases made abroad. Thus, in our country, kickbacks and corruption flourish.

Not so long ago, 6 of July this year, Dmitry Medvedev met with Defense Minister Anatoly Serdyukov. During this meeting, the President of the Russian Federation gave only three days to solve the problem with the implementation of the state defense order. The very next day, Anatoly Eduardovich publicly stated that critics should not panic in vain. The Russian Defense Minister also acknowledged that funds for the purchase of new weapons are unevenly allocated, although coordinated with all agencies interested in this issue. It was noted that purchases in the near future will be less intensive. This is due to the fact that many enterprises of the Defense Industrial Complex are to be reconstructed in order to properly prepare for large-scale mass production. It is also planned to build new factories (for example, for the Almaz-Antey Air Defense Concern).

12 July 2011 was given permission by the President of the Russian Federation, Dmitry Medvedev, to the Ministry of Defense, which allows it to give preference to foreign-made equipment if it turns out to be more competitive in both price and quality. At the same time, the head of state stressed that the funds allocated for the state defense order are big money, and the Ministry of Defense should, first of all, carefully examine each contract and analyze the cost price.

According to information received a week ago from the prosecutor Sergey Fridinsky, the number of violations in the execution of orders for the manufacture of military equipment and weapons, exceeded 1,5 thousands, only in the previous year and a half. This fact brought damage to the state in the hundreds of millions of rubles. According to the prosecutor, the cause of such problems was the dishonesty of several defense enterprises, and shortcomings in the work of customers, namely the bodies of the Ministry of Defense of Russia.

According to the prosecutor, representatives of the military departments and other customers do not control the quality of the purchased equipment, and also do not monitor the price dynamics of those enterprises that provide them with services and offer goods. Not without intentional illegal actions.

According to last year's data, the state order was not executed at all in full. In this regard, 10 May 2011, the president made a categorical statement about the search and punishment of those responsible for the disruption of the supply of defense equipment to the Russian troops. The head of state noted that if proposals of this kind are not reported directly, then industry and government leaders should be responsible for all the problems that arise. Otherwise, most of these individuals would have to change their occupation. According to D.V. Medvedev, not implementing decisions made at the highest level, is unacceptable. As evidence, the president quoted from his message for 2009 the year in which it was planned to purchase more 30 ballistic missiles, both land and sea, of five Iskander missile systems, 30 helicopters, 3 nuclear boats, one Corvette ship , and much more. All these orders were agreed in advance with the representatives of military structures and enterprises of the military industry, in connection with which the head of state demanded to indicate the reason that led to the disruption of supplies.

A week later, Deputy Prime Minister Sergei Ivanov delivered a report to the president on the first personnel decisions regarding those responsible for non-fulfillment of the state order. According to information received from the Kremlin press service, the outcome of these decisions was the dismissal of the general directors Vladimir Grodetsky (Izhmash OJSC) and Arkady Khokhlovich (FSUE Scientific Research Institute of Electromechanics). Next, Nikolai Vaganov, deputy head of the Armed Forces General Directorate, Igor Krylov, head of the development and organization of aircraft orders and armaments, and Nikolai Borisov, deputy armament chief of the Navy, lost their positions. Some time later, according to the report of Sergey Chemezov, several more officials were punished. The following were paid for the oversight: Nikolay Platonov, Director General of the Federal State Unitary Enterprise Research and Development Institute Poisk, and Valery Edvabnik, Head of the Federal State Unitary Enterprise Scientific Research Institute of Electronic Devices. The reason for their dismissal was the shortage of fuses for rocket volley systems. Nikolai Parkhomenko was charged with disrupting the supply of electronic products from the FSUE VNII Gradient General Director, Mikhail Volkov to the head of the Bryansk Electromechanical Institute, and Gennady Kapralov to the FSUE Kvant FSUE.
Ctrl Enter