22 September 2014
25
On Friday, more than 80 of Ukrainian troops from the 19 Battalion of Territorial Defense left the ATO area without permission and arrived in the city of Nikolaev. They don't consider themselves deserters. This is reported by the online newspaper Mk.mk.ua. 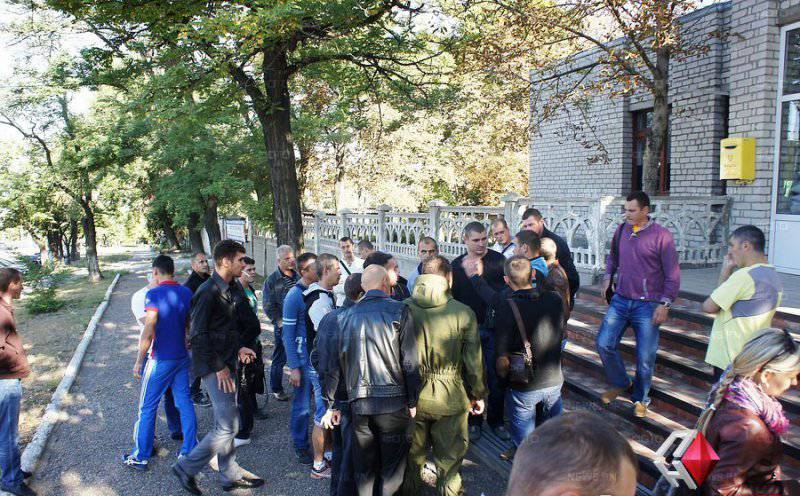 According to the publication, the position left the entire 1-i company and several fighters from other companies. The military do not deny that they left the anti-terrorist operation zone without an order, but to fight, not having weaponsno longer want.

"Our battalion was sent to the front line, but it was designed so that we would guard roadblocks in the city of Nikolaev, but for some reason we were sent to the front line in the Donetsk region. We came under fire without weapons. We used machine guns, grenade launchers, Tanks. So we simply can’t fight. Cannon meat we do not want to be. If the soldiers were given weapons, they would have remained and fought, ”said the foreman of the company.

According to him, those who remained on the front line are intimidated by the commanders, and he pities them.

“We do not consider ourselves to be deserters, we do not run up to our homes, and we have come to our military unit and want to continue our service. We are ready to go further, but with a weapon, ”said the foreman.

This position is held by the rest of the battalion fighters.

“We were just stuck in the landing, told to dig in and wait until they covered us ... this is also not an option, everyone has family houses, children. Therefore, we ourselves decided to leave, the commander did not support, - said one of the military. - When we were leaving (to the east), we were promised that there would be weapons, equipment, we sat for two weeks, none of this happened. We survived only due to the fact that we were in the trenches. ”

Another military man, the driver, told reporters that he had been given a blue civilian truck in which he was supposed to "carry personnel on the battlefield." “This is a living target for terrorists. I refused to leave, ”he added.

The driver told how militiamen once came to them and warned of the danger: “You are standing on that side, we are on this side. They will fire at you in an hour, but it will not be us, it’s some people who want to shoot. ” “Some games ... but well, at least they warned, we managed to hide, because the shelling began in half an hour,” he said.

According to the military, many of his colleagues do not know how to use weapons. “We have never been to the site. They shoot me, and I have to sit and read with instructions how to approach this grenade launcher, ”the driver complained.

One of his comrades believes that there should be no untrained fighters on the front line. “They can let you down, betray you, they will not be able to hold positions, they will not help, they will run away. And we went there morally unprepared, ”he noted.

Another soldier criticized the commanders for illogical orders: “For example, an order: send without any cover and 20-30 equipment to a zone where enemy troops are seated. I have no normal words to convey this. Tasks still do not understand what were set before us. Initially, a battalion was being prepared for the third line of defense, and we were sent to the front of the unprepared, and for some reason, all the combat-ready troops were behind us. ”

Meanwhile, Alexander Ivanov, a military commissar of the Nikolaev region, stated that the military unit in which the escaped servicemen are going to continue their service (2326 field post) does not exist in Nikolaev, it is located elsewhere. Therefore, what they are doing here, and in what status they are, he has no idea.

“I arrived at night from the place where the fighters were stationed, the ammunition is in sufficient quantity, the heavy weapons came the day before yesterday, there were enough body armor even to secure the transport,” the military commissar said.