Battle of the Beneficiaries 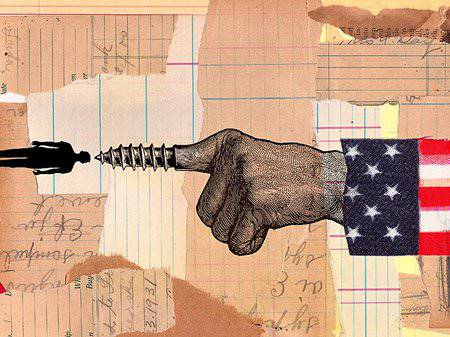 James Foley, Stephen Sotloff. Who is next? The militant "Islamic State", who executed Stephen Sotloff, threatened that the next victim could be a British citizen named David Haynes. Following a clear sequence of threats to the executioner in previous executions, the implementation of the next threat and candidacy is beyond doubt. The first and second victims of the executioner were US citizens, the next victim sounded by the executioner - a British citizen. Video clips staged execution of excellent quality and nothing more. You should not focus on the proofs of the performances and the unreality of the situation of what happened. Just carefully review both videos in the full version several times. The question is, why is this done and who benefits?

With the beginning of the First World War, the war became the most profitable business for the United States, which turned the country of agricultural planters into the modern leader of the world, political arena. A super-profitable business that costs billions of dollars in military budgets. Considerable funds allocated to secret items of expenditure intended for undercover political intrigues and vile wiles, both in their own and in other governments, including the world political arena, bring many tens of trillions of income.

The US business process is a continuous war. Wars in politics, economics, religion, morals, morals, direct military actions, and recently cyber war. Accumulated by the USA in the twentieth century, the experience of doing business wars, the owners believed in the inaccessibility, invulnerability and world domination, as confirmed by Obama’s recent words about the exclusivity of the American nation. Shareholders of business, stunned by impunity and brutalized from the sea of ​​blood, came to the twenty-first century as monopolists - bespredelschikami.

In the process of the First World War, the pretext for which was the alleged struggle for primacy in Europe between England and Germany, the whole of Europe was washed with blood. As a result, tens of millions of human lives were burned in the fire of war, the destinies of hundreds of millions of people were crippled, history centuries-old states, including the Russian Empire. This is the biggest tragedy of the twentieth century and the first world war. And only located behind a huge puddle, on another continent, the mega-corporation United States of America turned out to be a huge plus, while becoming one of the first figures of world politics, with a booming economy.

The Second World War, in addition to huge profits, brought mega-corporations full political control over the countries of all of Western Europe and Japan, which was the main competitor of the United States in Asia and the Pacific. Until now, the heads of government of these countries cannot take office and make further decisions without the consent of the “shareholders” of the United States. The entire world economy, with the exception of some branches of the USSR economy, came under the control of the United States. The US currency has become the world. Total war 1939-1945's. 64 states with an aggregate population of 1,7 billion were involved. The general theater of military operations of the Second World War is whiter than the territories covered by the First World War by a factor of 5. Losses suffered as a result of the Second World War are striking in their scale. More than 50 million people died. Given the constantly updated data on the losses of the USSR, this figure can not be final. Only in the death camps 11 million lives were destroyed. The economy of the majority of the warring countries was undermined to a state of complete incapacity. Background and causes of the outbreak of the Second World War led humanity to inevitable death, and only thanks to the victory over fascism did our civilization survive. The words of surprise of the American political scientist and sociologist Zbigniew Brzezinski about the paradox that the defeat of Nazi Germany raised the international status of the United States, in the absence of a decisive role for the United States in a military victory over Hitlerism, sound very sly. At the same time, Brzezinski rightly notes that the merit of achieving this victory should be recognized for the Stalinist Soviet Union, Hitler’s odious rival. By the end of World War II, the United States actually owned more than half of the global global economy through US foreign investment, the provision of huge loans, and war debts. The economic expansion of the United States, the colossal scale of the export boom in the period from 1910-1950, were inextricably linked with the wars in Eurasia. At a time when the countries of Eurasia were ravaged by wars, the United States, on the contrary, had tremendous economic growth. The power of the US industry was rapidly developing, while the industrial and economic potential of most countries of Eurasia was destroyed.

The First and Second World Wars, the United States was able to completely eliminate any economic rivalry of American corporations and companies. The Second World War helped the United States recover from the consequences of the Great Depression, artificially created by the very mega-corporation itself, and take the lead in the global economy. In the conditions created by the megacorporation, only the United States had economic resources for economic recovery and the industrial potential of the countries of Europe and Asia, which were given out with certain conditions and were taken by countries from hopelessness, in order to avoid inevitable death in the process and at the end of wars. The conditions included a super favorable regime for US corporations, trade preferences for the United States and the creation of US subsidiaries of mega-corporations in Europe and Asia. For example, most of the foreign aid that was officially granted, with the approval of the beneficiaries of the mega-corporation, was sent back to the private bank accounts of US corporate owners in order to help European countries rebuild. Because US companies held the main, most lucrative, most long-term, promising contracts related to the reconstruction of the economies of the affected countries, the restoration of industry and infrastructure.

The current situation around the sanctions against Russia clearly, very clearly demonstrates and proves that the United States absolutely does not care about the costs and problems that the following US policy Europe and allies of the mega-corporation will face in the near future. It is not surprising, it is enough to recall the Great Depression and analyze the causes of the fall of the twin towers. The concept of "conscience" and "economy" are not compatible.

The victory over fascism strengthened the position of democracy, provided a path to the recovery of human civilization. However, since the end of World War II to our time, there have been more 250 wars and military conflicts. All conflicts, from the Cold War to our time, are inspired by the United States. Humanity again and again stood and is currently on the verge of the possibility of nuclear war and total extinction. As a result, the USSR's superpower, the only counterbalance to the United States during the cold war, was defeated and went down in history. A unipolar world model has emerged with the dominant superpower, the US trans-national megacorporation. The goals of wars led by the United States with the help of NATO after the end of the Second World War are open seizure and submission of foreign territories, states, economies, natural resources, and genocide of the population of sovereign states, and all this has virtually no relation to freedom, democracy and the protection of rights man, so widely promoted, protected and "implemented" by the United States.

In today's part of the old, acting scenario, the United States has declared the culprits and those responsible for the death of reporters - Islamic radicals, militants from the "Islamic State" (ISIL). "Executed" a British citizen, after which, in unison with Obama, Cameron sang angrily. Against this background, Obama, in the coming days, will give the order mercilessly to smash those who six months ago the US supported, armed, taught, directing to fight against Assad in Syria and not only. Today’s artillery preparation on the outskirts of Baghdad is a direct confirmation of this. Naturally, they will smash together with the UK, with the help of NATO and with the consent of the UN. Along the way, it is necessary to “clean up” ISIS in Syria, but Assad remained the main goal in Syria, as before, for the United States. A good reason to continue the job. Now it becomes clear the logic of Cameron's behavior, the current policy of Great Britain and precisely for this reason, it is planned that her subject is on the waiting list before being executed. One family, two incest sisters, the pathology of ambitious genes is more than obvious. The militants of the "Islamic State" are far from fighting for the purity of Islam, which they hide behind, but fighting for the interests and oil for the megacorporation, which it converts into money, into dollars. The moor has done his work, the moor can retire. In this case, the Moor, the same “Islamic State”, having formed, is just starting its main business.

The Islamic State is the brainchild of a megacorporation, an upgrade of the older brainchild, parallel to the existing, similar version called Al Qaeda. The United States actively applies the principle: "Divide and conquer." They have long learned without direct military intervention, successfully and imperceptibly eliminate competitors, rivals and opponents. Continuously print candy wrappers - dollars, bribe politicians. They themselves give birth, adopt, “educate” and they also pay them - to terrorists, fascists, separatists. Business and nothing personal. Megacorporation has long since bought up all the world's media and has successfully brainwashed ordinary citizens, putting them into the subconscious of the necessary and advantageous for the US vision of situations and position in the world. In the past twenty years, Ukraine has become the brightest example. The recent message on the Internet from the “Islamic State” also contains an openly stated threat to Russia - a new war in the Caucasus. This time, most likely, already not only in Chechnya, but also in Dagestan, Ingushetia and, God forbid, in Tatarstan prepared by mega-corporation for war. This is the only way out for the US against the backdrop of the failure of the “Ukraine” deal - to open a second military front in the war with Russia, on the territory of Russia, on its other frontier, where everything has been worked out for a long time in practice to automatism. This is the main goal of the age-old scenario of the megacorporation, to seize Russia, the most delicious in its eyes, the long-awaited piece of the world pie, once again, miraculously escaping from the hands of the real owners of the United States.

The battle of the beneficiaries of the United States, which in the twentieth century consisted in constant competition and upholding the right to dictate terms to the world on behalf of the White House, in the twenty-first century became a struggle for survival. Megacorporation, divided into two sides. One, more sensible opposing side, wants to stay, having built in, having insured in advance, having accepted the new conditions with the least losses in the modern world. The other, finally genetically degraded, continues its policy of world terror and lawlessness, not wanting to recognize both its helplessness in the recent history of tectonic changes in geopolitics and the world order, and the current situation in which the United States are no longer the first persons defining modern civilization.