Scotland referendum - the results are not important

20 September 2014
66
How to treat the referendum in Scotland and its results?

For this you need to remember the rules of the game. Recall who is the real head of state, of which Scotland is a part. Part of which wants to stop being part of the population of this country. There is someone else's game, according to someone else's rules, in a foreign field. The outcome of the Scottish referendum on its independence ... Scotland’s independence will not.

In any case. This is not about Scotland. Speech about us with you - speech about Russia. 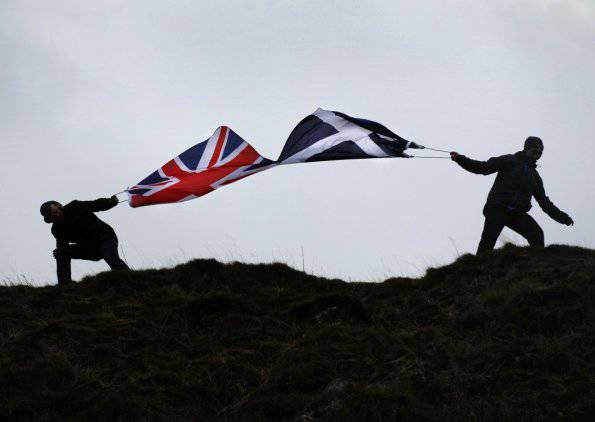 In the event of a "loss" of the referendum - Scotland, as before, will remain part of the UK. In the case of "win" - its independence will be illusory. Like today's Canada. The fact is that the head of the UK - Queen Elizabeth II ... will remain the head and "separated" Scotland. How today she is the real leader of the "separated" Canada ... Did not know?

Then for you quote from the Constitution of Canada:

"Elizabeth II, by the grace of God, the Queen of Great Britain, Canada and other kingdoms and territories, the Head of the Commonwealth, the Protector of the Faith, Everyone to whom these provisions can have anything to do, Hi."

That's the way - "with greetings."

To be completely precise, the cited document is called the “Proclamation on the Constitutional Act of 1982 of the Year.” And he opens the Constitution of the country of the maple leaf. For those who do not know the structure of this country and thinks that Canada is a democratic republic, I will say straight away that this is not so. Canada is a monarchy. The head of state is the British Queen. Will you say that it is only “for furniture” and “reigns, but does not rule”? Then read the list of powers of the Queen of Great Britain. The heads are not only Great Britain, Canada, and Australia — all 15 states.

- The Queen is the head of state and represents him in foreign relations, if the Prime Minister goes to meet him instead, it is only because the Queen has AUTHORIZED to do it.

- The Queen of Great Britain is the supreme commander of the armed forces, it is she who declares war or makes peace.

- The Queen is the head of the Church of England.

Liberals love to talk about "the separation of branches of power." So in the case of the British (Scottish, Canadian, Australian, etc.) queen, the situation is not at all liberal.

The Queen is the chief executive.
She appoints or removes prime ministers and ministers, as well as all civil servants who are "in the service of Her Majesty."

The Queen is the head of the legislative branch. The monarch in Great Britain is part of the parliament along with the House of Lords and the House of Commons. The monarch has the right of absolute veto on any law enacted by the parliament, but the last time this right was applied in the 1707 year, for which he received the nickname “sleeping authority”. Only the Queen has the right to early dismiss the House of Commons, that is, the British Parliament. When elections are to be held, the country's prime minister goes to the queen with a request to dissolve parliament so that new elections can take place. It is possible to offer the prime minister, but only the monarch has authority to dissolve.
The Queen is the head of the judicial system. She can cancel any sentence.
Thus, the Queen of Great Britain heads all three branches of government (executive, judicial and legislative), her powers are limited not by law, but by custom, and the comedy “reigns but does not rule” for the whole world.

The question arises: why does London need to carry out this entire circus with a referendum?

To pave the way for the collapse of states, their fragmentation into small territorial "atoms". They will keep control of Scotland for themselves, but the crushing of all other countries will be “fair”. That is, with the loss of this control from the center. Flemish in Belgium. Then Catalonia in Spain. Who will the newly formed European “countries” be targeting? In the US and the UK? Maybe in China? Or maybe to Moscow? Of course, to Washington and London.

And what is the largest country in Eurasia, which you really want to divide into parts our "partners"? This is us - Russia. The bell tolls on us. The Anglo-Saxons do nothing for nothing. They could kill the referendum in their Scotland at the very beginning, roll them up in the wilds of the bureaucracy. After all, the fate of their country is at stake.

But they hold a referendum. To show the world its “democracy” and then demand, support the holding of such referendums around the world. And above all - in Russia. With any outcome of the referendum - a precedent for its conduct will be created. Therefore, its outcome is not so important as the fact of its implementation.

What should be the position of the patriot of Russia in this case?

As a patriot of Russia, I oppose everything that weakens Russia. Therefore, I am categorically against the referendum on secession from Russia.

What about Scotland? And let Scotland decide itself. Or rather, let those who brewed this mess decide in London.

This is not our game.

PS As a humor, who decided to hold such a fateful referendum and why ... on Thursdays, and not on a day off? An interesting experience, I do not understand why the liberals do not demand to use it in Russia?