Is it possible to expel the devil devil? 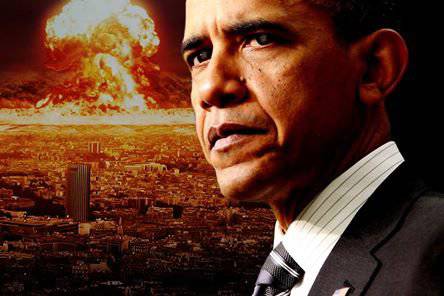 What did the US authorities say for the entire last month - starting from the very day when the video of the execution of the American James Foley appeared? On the need to combat terrorism. In all ways and methods. Despite the borders and international laws. Obama has made formidable statements, speaking about the threat posed by the gang called the Islamic State. During this time, two more videos appeared with brutal executions of Western citizens. However, the West did not pay the slightest attention to the execution of the Syrians by the same terrorists.

And what did the fight against terrorism proclaimed by Obama become? In fact, first the House of Representatives and then the Senate of the US Congress approved another decision to train and arm the so-called "Syrian opposition."

Actually, for Syria, this decision is nothing new: for almost four years now this very “opposition” has been arming and feeding at the expense of external sponsors. But, it would seem, with the execution of citizens of the United States and Britain, these countries would have to understand the danger posed by terrorism. But in practice it turns out that all the same terrorists are armed and trained - and it doesn't matter how they call themselves.

The author of the document supporting terrorist gangs in Syria was the chairman of the House Armed Services Committee of the House of Representatives, Howard McKeon, a representative of the Republican Party. He was approved by such a well-known friend of bandits, as the "Vietnamese sidelets" John McCain.

As the head of the Committee of the Chiefs of Staff of the US Armed Forces, Martin Dempsey, stated, the process of preparing the next militant party will begin in three to four months. At the same time, a “careful selection of candidates” is assumed (again, nothing new: the US kept talking about helping the “moderate”, but in reality these “moderate” terrorists simply don't exist in nature). Through the 8-12 months, Washington expects to receive a group of well-trained militants who allegedly will fight the “Islamic State” (in fact, they can only expect new crimes that are not essentially different from those created by the IG).

The text of the resolution will be signed by Obama, according to which, “supporting the opposition is a key element of the strategy.”

In general, the United States is attacking the same rake. The so-called “Syrian revolution” began with this - with the support of the “democratic rebels”. Then these “rebels” turned out to be hardened terrorists and nonhumans, killing Syrians and spreading their hatred to all people who disagree with their hateful beliefs. A serious extremist force was created, which was not confined to Syria, but climbed on Iraq, and the danger from which, it would seem, the whole world realized. Now the United States instead of fighting terrorism again acts as its sponsor and patron. We see only another round of forcing tension. When Syrian citizens only wish to restore peace, they are again trying to impose a long-term war.

“No,” a supporter of Washington’s policy would say, “that’s not true. The United States wants to support the fighters against tyranny, not the Islamists. And these good rebels will fight the "Islamic State."

In fact, the so-called “Syrian Free Army” is exactly the same terrorists as the “Islamic State”. And to fight the “IG” with the hands of the “SSA” is the same thing as trying to cast out the devil's devil.

The FSA, in the same way as the “Islamic State”, as well as “Dzhebhat An-Nusra”, already declared a terrorist organization, commits massacres of civilians, recruits children into its ranks, kidnaps people for ransom, carries out terrorist acts. Syria has repeatedly spoken about this at the international level, but its appeals have not received due attention.

If the United States really wanted to fight terrorism, they would not arm it, but would cooperate with the force that already confronts this global threat. Namely - with the Syrian army.

As the permanent representative of the Russian Federation to the UN, Vitaly Churkin, stressed in an interview with Fox News, the White House will not be able to form an international coalition against the Islamic State without coordinating with official Damascus. The Russian diplomat added that Washington must respect international law.

Speaking about the role of Russia, Churkin noted that during all the years of the Syrian crisis, Moscow had always warned that terrorism was the main threat in the region. Washington also focused its actions on the fight against the Syrian leadership.

We see that such tactics led only to the saddest consequences. However, due conclusions were never made.

At this time, crimes against the Syrians continue. The Syrian "opposition" in the province of Idleb in some areas that are under the control of its militants, made an unsuccessful attempt to "do something for the people." It turned out only a tragedy.

It must be pointed out that all this time, despite the most severe conditions, the state has vaccinated children against polio, smallpox and other dangerous diseases. Sometimes doctors risked their lives in order to fulfill their duty in dangerous areas. Many doctors and nurses even paid for it with their lives, since the “opposition” opened fire on them.

And this very “opposition” - and, more precisely, the “moderate” - decided to prove that it can cope with this task too. But if the state carefully checked the quality of vaccines, then the militants had no time for that. As a result, a low-quality smallpox vaccine was imported from Turkey. As a result, in the city of Maarrat An-Numan of Idleb province, more than a hundred children were killed and injured.

The SAR MFA appealed to the UN with a special appeal on this occasion. But it is difficult to expect that it will be considered as it should and will take any measures in relation to Turkey, which has provided spoiled medications, and militants who organized pseudo-medical institutions and killed children.
Meanwhile, mortar shelling of the Syrian capital continues. September 17 mortar shells exploded in the districts of Al-Mazraah, Shaolyan, Al-Adawi, Al-Abbassiin and Bab Ash-Sharqi. At least one person died, four were injured. In the province of Hama, in the city of Mhard, militants of the “moderate opposition” made four blows with artisanal rockets - two people were killed, another one was injured.

The United States will continue to prepare the militants of this very "moderate opposition" - for some reason, Washington needs these attacks and killings to continue.