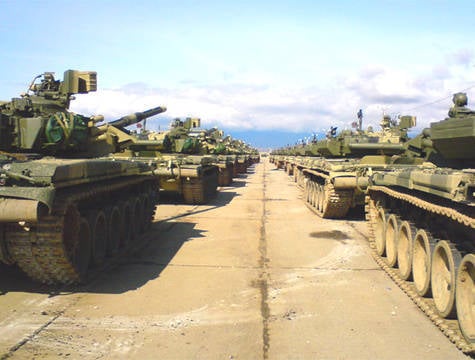 Today, every Russian is well aware that only memory has remained from the former glory of the Soviet Army. Priorities in military dominance on a global scale have changed and quite significantly. Twenty years ago, there were two real forces — the USSR and the USA; today, China and the armed forces of Western European states are taking the lead, and only the United States holds its leading positions. Russia, thanks to the foundation laid, continues to be in the top three, but if China is already ahead of our Armed Forces in many ways, then quickly, rapidly developing its military potential, Germany, France and the United Kingdom will leave Russia behind their backs. The most offensive in this situation for the Russian military is the lack of proper response to such an unpleasant situation on the part of the government. Many middle-aged Russians remember very well how exacting the communist government of the USSR was to the armed forces of their state, but is there any chance for the modern representatives of the Communist Party to return the former power and international recognition to our troops. February 3, chaired by G. Zyuganov, the leader of Russian communists, was held a round table meeting in the State Duma, the main topic of which was a discussion of the problems of military reform and the defense capability of the Russian Federation. Among its participants were State Duma deputies, military leaders, scientists, representatives of the military-industrial complex.


In his opening remarks, G. Zyuganov noted that today, in a crisis, there is no effective lever for governing the country. With this in mind, the upcoming reform of the Armed Forces can be regarded as the most real crime. The main task that the “round table” has to solve is to understand and determine the exact reasons for such a development of the situation, which will undoubtedly help to develop measures to stop such a robbery. The leader of the Russian Communists recalled that capitalism throughout its stories survived two dozen crises. Two of which led to bloody world wars.

MP faction of the Communist Party, Deputy. Chairman of the State Duma Committee on State Building and Constitutional Legislation, leader of the All-Russian Movement in Support of the Armed Forces, Military Science and Defense Industry, V. Ilyukhin called the planned reform the latter. After it, our country’s Armed Forces will not be elementary and will have to be re-formed. But in this situation it is not necessary to shift all responsibility for this to Minister of Defense A. Serdyukov. He is only a submissive performer. The main culprit of all that is happening - the former president of the country, and now the prime minister V.Putin. It was during his leadership that the concept of criminal reform was developed. The current President D. Medvedev only automatically legitimized it. V.Ilukhin stressed that today the government is working against its own state, and the parliament is actually excluded from solving global security problems.

The President of the Academy of International Problems, Colonel-General L. Ivashov noted that the leading states of the world have significantly increased military spending today. The West has drastically changed the balance of power on a global scale in its favor. The United States and its European allies made a qualitative breakthrough in military technology. Already today, they are testing and adopting the fifth generation combat systems, while our third-generation systems are still in service with our army. At the end of the summer of 2007, the United States conducted successful combat tests of cyberweaponsable to influence the enemy’s computer networks from a distance and thereby disable them.

Russia lost the opportunity to maintain its military parity, as well as the creation of shock groups. The military-industrial complex today is not a complete system, but a set of enterprises, which for the most part are oriented to foreign markets. The Russian government elite behaves extremely carelessly and moreover criminal. As an illustrative example, L. Ivashov cited the work of Norilsk Nickel, which ships all the cobalt metal it produces in the United States. Overseas military designers transferred the technology of manufacturing a continuous chemical laser, which is now used in the work on the creation of a missile defense system. In 1993, in the USA almost the entire stock of weapons-grade uranium was sold. At the direction of V.Putin, the Americans are being transferred secret technologies for the production of completely new types of tactical nuclear weapons.

As for the so-called military reformation of A. Serdyukov, it cannot adequately answer any of the current challenges to Russia's security. The planned liquidation of armies and regiments is thoughtless, stupid, and useless. As a result, no more than a million military personnel will remain in the Russian armed forces, but 800 - 900 thousand civilian specialists will be employed to service them.

admiral fleet V. Selivanov, in the early 90s the chief of the General Staff of the Navy, spoke about the difficult situation of the Russian naval forces. There are practically no warships. Today, the Black Sea and Baltic fleets, combined, in quantitative composition are less than the 5th operational squadron of the USSR Navy, which was located in the Mediterranean Sea. In the Baltic and the Black Sea, only one submarine was left at the disposal of military sailors.

The combat composition of the fleet is in such a state that it is impossible to conduct any significant marine operations. Over the course of 17, only two Russian ships were handed over to the troops: the diesel submarine St. Petersburg and the corvette Steregushchy. All the others are ships built during Soviet times. Today, Russia has completely lost the ability to create aircraft carriers and nuclear submarines, since the main production facilities are located in Ukraine.

Army General P. Deinekin, in 1991-1998 Air Force Commander, dwelled on existing problems aviation. He said that today our long-range bombers are patrolling at the borders of possible opponents in the best version in pairs. Whereas in the days of the USSR, sorties were often carried out by entire divisions, and this was 40 vehicles. P. Deinekin pointed out that the forthcoming reform of the Armed Forces is unlikely to be carried out taking care of the military personnel, as well as their family members.

Of course, the facts about which people close to the army spoke, and its problems, look terrifying. From all of the above, one conclusion can be made: with a similar attitude to the armed forces, there is no hope for leading positions, and, moreover, the words of one of the great commanders are more urgent than ever for modern Russia: “A state that does not feed its army will feed enemy army. "

We are in Yandex Zen
Military reform as an integral part of the security concept of the Russian Federation: Systematic dynamic assessment
How I was held in this election
7 comments
Information
Dear reader, to leave comments on the publication, you must to register.