Why Khazaria was for Russia a terrible enemy - "miracle Yud" 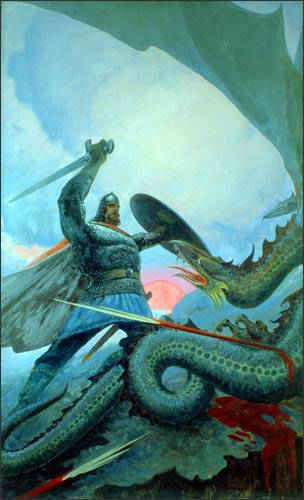 History The Khazars are one of the most mysterious pages of history in general, but by understanding the reasons that led Svyatoslav so cruelly and mercilessly to uproot this education from our borders, one can understand the subsequent general course of Russian history. It is necessary to start quite from afar - from Khorezm of the 7th century, when it was not even Muslim, and its inhabitants were fire-worshipers, confessing Zoroastrianism, like the Persians.


At the end of the century in Khorezm there was a civil war, a relative of Khorezmshah after his father and the grandson of the head of the community of rakhdonites (Jewish usurers and merchants) by his mother Khurzad raised a revolt in order to seize power. It was supported by rahdonites and sectarians-mazdakids (their banner was a blood-red banner with a five-pointed star). This heresy was very similar to the much later Marxism, she argued that all people are equal before God and, accordingly, all people should be equal on earth, therefore it is necessary to redistribute property in favor of the disadvantaged. Everything seemed to be quite good in words, but in reality, and in alliance with the rakhdonites, it came out quite disgustingly - in the cities taken there was a merciless terror, the crowds of the rebels cut out the right and the guilty as well, while the rahdonite slave traders did not touch the houses. They are on the contrary, amidst the general ruin and slaughter, they grew rich literally before our eyes.

As a result, the whole of Khorezm rose: from noble warriors to simple peasants who did not spare the rebels, terror spawned a response terror. Naturally, they were the first to realize what it smelled like, rahdonites, caravans with the loot crossed the western border and came to where there were already established connections - to the Lower Volga, the North Caucasus. Naturally, the rich merchants were greeted with joy - the power of the Khazars increased, the Jewish girls became the wives of the tribal princes (the so-called “institute of wives” of this organization, similar in its methods to the mafia, was perfectly worked out), the merchants entered the country's elite. Thus, the military leader of the Khazars (who were a people of mixed origin — Slavs, Turks, and Caucasian peoples in his roots) Bulan adopted Judaism and took Sarah, the daughter of Elder Rahdonit, as their wife. His son Ras-Tarkhan did the same, his grandson already bore the name of the Jews Obadiah. Centuries later, Khagan Bey, Joseph, a descendant of Ras-Tarkhan and Obadiah, will write to the co-religionist in Spain: "Obadiah renewed the kingdom and strengthened the faith according to the law and the rule."

Byzantine, Armenian sources and archeological data allow us to understand how Obadiah “updated” Khazaria. A civil war broke out in Khazaria: the old pagan elite opposed the new elite, it did not like the order that was established in the country. Apparently, the Old Testament hatred of the Rahdonites and their “Khazar” grandchildren toward paganism became a pretext - the sacred groves were cut down, the altars and shrines were destroyed. The war was not for life, but for death, the fact that Obadiah had lost his son Hezekiah, the grandson of Manasseh, tells about its heat, so the throne had to be handed over to his brother, Chanukah.

The rebels were doomed, they did not have all the secret methods of skillful intrigues, for them the oath was a matter of honor, they did not know what for the aliens to deceive a heathen means to please their god, and, most importantly, they did not know what total war is. For them, the “new Khazars” were still their own, albeit inferior tribesmen. The limit of cruelty in the steppe war was to destroy all adult men, children and women were given to the victors. They did not know that the Old Testament prophets of the Jews told them: "kill all the male children and all the women ..."; and in the cities of the nations, which the Lord gives to possessions, "do not leave a soul alive," and even ordered to destroy all living creatures - oxen, sheep, etc. In the relatively recent past, humanity experienced such horrors when Hitler replaced the "elect" The Jewish people were Germans, and the Japanese ideology worked in the same way - as a result, tens of millions of corpses, from Europe to China and the Philippines.

The cities captured by the troops of Obadiah were cut out completely; after a thousand years, archaeologists excavated piles of bones in them - the Right Bank Tsimlyanskoe and Semikarakorsk settlements. Solid bones, everywhere - on the streets, in houses, in the courtyards, men, women, children, old people. That is, Obadiah “renewed” the kingdom in a very peculiar way, according to the ancestors' covenant: “And you will destroy all the nations that the Lord your God gives you; do not spare your eyes. ” The new elite of the Khazaria carried out its terror with the help of the new army, it is clear that the Khazars would not have done such an atrocity — completely cutting their fellow tribesmen. A completely hired army was created, which lived on a salary, a rare phenomenon in that era, usually the army was assembled from nobility squads, plus a people's militia. They were strangers in Khazaria, many were Arabs, for them the pagans were also "subhumans".

The Khazars were terrified, the majority bowed their heads before the new government, part of the clans escaped to Bulgaria, to the Hungarians, to Russia. A terrible fate awaited the Slavic tribes that were part of the Khazaria, because they were pagans. After the “renovation”, the Slavs are mentioned in Khazaria much less frequently, apparently, their numbers were greatly reduced, and their status fell to the position of slaves. So, from 9 of the supreme judges of Khazaria, only one judge was engaged in the affairs of pagans, including Slavs, a small Jewish community - 3 judges, Muslims - 3, 2 - Christians. The performance of the northerners, headed by Prince Lutover, was brutally suppressed.

The mode of existence of the “state in the state”: the Jewish elite (“White Khazars”) lived in the “elite villages”, under the protection of the walls of the fortresses, and the “black Khazars” (the rest of the population) was forbidden to enter there, on pain of death. According to the modern - this is an apartheid regime.

It is clear that such a "neighbor" for the Rus was a real "miracle Yud", "serpent", which should not be given mercy. It was a state that literally stood on the bones of thousands of innocent victims, sold many thousands of our ancestors to the southern countries. Therefore, where the squads of Svyatoslav passed, as Ibn Haukal put it, “if anything remains, only a leaf on the vine”. We are left with only the cruel image of enemy blood in the epic "Fedor Tyryanin":

Parted Mother Cheese Earth
Like all four sides
I devoured a Jew's blood,
Jewish, Basurmanian,
King of the Jews.

We are in Yandex Zen
1050 years ago Svyatoslav squads defeated the state of the Khazars
Saber kick of Svyatoslav on the Khazar "miracle-yuda"
13 comments
Information
Dear reader, to leave comments on the publication, you must to register.