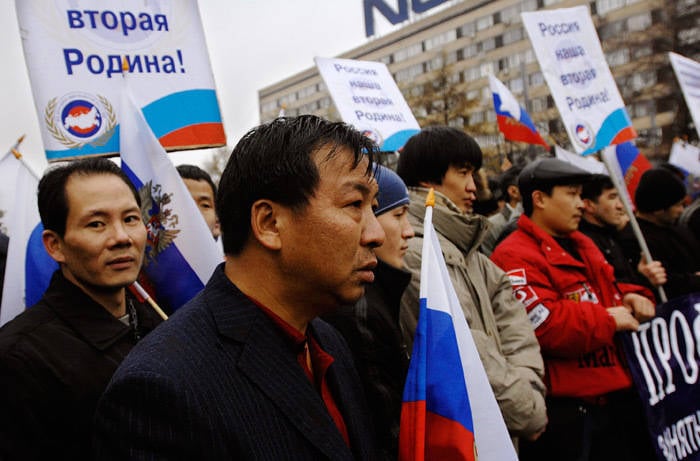 By 2050, migrants will make up more than a third of Russia's population. Yes, right now, according to media estimates (the Rosstat still does not publish data from the last census on the national composition of the population), there are only a little more than 66% of the population left in Russia. But recently they were 80% and more.

Such depressing data, vividly testifying to the fast-paced process of replacing the indigenous population of Russia with the newcomer population, was voiced in Moscow at a meeting of the “Dialogue on Migration” of the RF-EU.

And, which is characteristic of the current authorities, many of the Russian participants in this “dialogue” spoke about this process not as a catastrophic phenomenon, destroying what is usually called the word “Russia”, but as a kind of objective trend that needs only to be taken into account.

“Even today, about 10 million citizens of other countries live in Russia. This is the whole of Portugal, if we take the European equivalents, ”exclaimed Konstantin Kosachev, head of the State Duma Committee on International Affairs, the one who voiced the data that by the year of 2050 Russia will become a country of alien people by a third. It would seem that it is necessary not only to sound the alarm, but the power given by the deputies to put an end to the expansion of guest workers. But it was not there: Kosachev, it turns out, doesn’t see any trouble in the figures he voiced and, on the contrary, welcomes the influx of migrants in every possible way. According to him, Russia is being helped by "ethnic" weapons. But Kosachev further reports in cold blood that the contribution of migrants to the economy and demography of the host country substantially exceeds the costs associated with migration. Moreover, the head of the international committee of the State Duma, without any hesitation, said that Russia would need 2025 million migrants before 20. Why then the alarmism, which seems to be filled with the exclamation "This is the whole of Portugal." What do you need for migrants to accumulate on “two whole Portugal”? And Russia was not at all !?

The same parliamentarian impartially told the parliamentarian that according to official statistics in 2009, foreigners took about $ 19 billion from Russia to their countries, which is 2% of Russian GDP. This is more than migrant workers from all other European countries except Switzerland. For example, local migrants from Germany raised $ 16 billion, from Italy - $ 13 billion, from Spain - less than $ 13 billion. And only from Switzerland did visitors send home $ 19,6 billion. Besides this European country, they also exceeded the outflow of such money from Russia United States ($ 48,3 billion) and Saudi Arabia ($ 26 billion).

In itself, this “achievement” of Russia (4-e place in the world, very little did not reach the “bronze”!) Should have forced our authorities to take emergency measures to turn off this migrant “vacuum cleaner”.

But if it was only about them. Let us recall the clarification that flashed in Mr. Kosachev’s report, “according to official data”. After all, according to unofficial (and much more reliable) data, foreign migrants annually ILLEGALLY withdraw from Russia the amount at least twice as high as the one spoken about by the deputy. So the migrant “vacuum cleaner” annually sucks up about $ 60 billion from Russia! That's more than migrants from 350 million America are taking away! Absolute world "achievement"!

Yes, migrants earn their money by creating certain products in Russia - goods or services. But a significant part (which is even difficult to say) they simply withdraw from their Russian economy! Are we so rich? And at this time, we recall, millions of able-bodied citizens of Russia, especially in the outback, are left without work.

It is time to sound the alarm and take emergency measures, protect yourself from the "ethnic" weapons of mass destruction of Russia!

Unfortunately, only one State Duma deputy, Semyon Bagdasarov, made a “call” with this kind of appeal. “Every year, according to the World Bank, 10,5 million migrants come to Russia as a memory, as they say, of which 5 million remain in the country. This seriously affects the demographic situation in the country. Do not publish data on the census, the national composition. But, if I am not mistaken, the figure has repeatedly passed in the press - 66,1% of Russians remained, and there were 80%, ”said the deputy.

According to Bagdasarov, Russia has many problems because of the open borders with the CIS countries: “The problem of migrants, especially from Central Asia, is a drug problem. We have open doors for drugs ... Then - the threat of terrorism. Almost all terrorist organizations of so-called Central Asian origin are operating in Russia, and these terrorists move freely ... There is an article of the World Bank, which states that every year officially (through banks) from Russia goes to the CIS countries, with which we have a visa-free regime, over 18 $ billion. This is only through the banking system, and the fact that the envelopes are being transported, well, multiply twice. That is a lot of money that is not taxed, as a rule, issued by the “black” cash, leaves the state, leaks money from the country. ”

Bagdasarov called for a tightening of the visa regime with the CIS countries (although he meant by “tightening”, it is not entirely clear - with the CIS countries, we have a visa-free regime). Nevertheless, the deputy reminded that the visa-free regime in the CIS was introduced in 2000 by a special agreement. “This document has a clause 4, which states that if a visa-free regime threatens the national security of a particular state, then that state has the right to tighten the visa regime. I always ask a question: do we have a threat to national security? ”Asked Bagdasarov. “I’m already proposing to tighten the visa regime for 4,” he continued. - For example, for citizens of Tajikistan. This is the main state, through whose territory a huge amount of drugs and terrorists go to us, which has an 1433-kilometer border with Afghanistan - essentially open. ”

Unfortunately, the words of Bagdasarov remained a voice crying in the desert.

According to official data, in terms of the ratio of money transferred by migrants from Russia to their country to GDP of the same country, Tajikistan ranked first last year (35% of that country’s GDP was transferred there), Moldova was second.

We are in Yandex Zen
Missed chapter "Strategy-2020"
6 comments
Information
Dear reader, to leave comments on the publication, you must to register.