Why is Russia an enemy for the USA?

18 September 2014
73
This question, both simple and complex at the same time, was asked by Clive Mound, an exchange and investment expert, market analyst and trader who had previously lived in London and then moved to the USA. Him broker among other things, it is devoted to a number of issues of the precious metals and energy market. It also touches upon the problems of geopolitics. In a recent article, the analyst indicates that the United States is trying to destroy Russia in order to preserve the hegemony of the dollar on the planet. 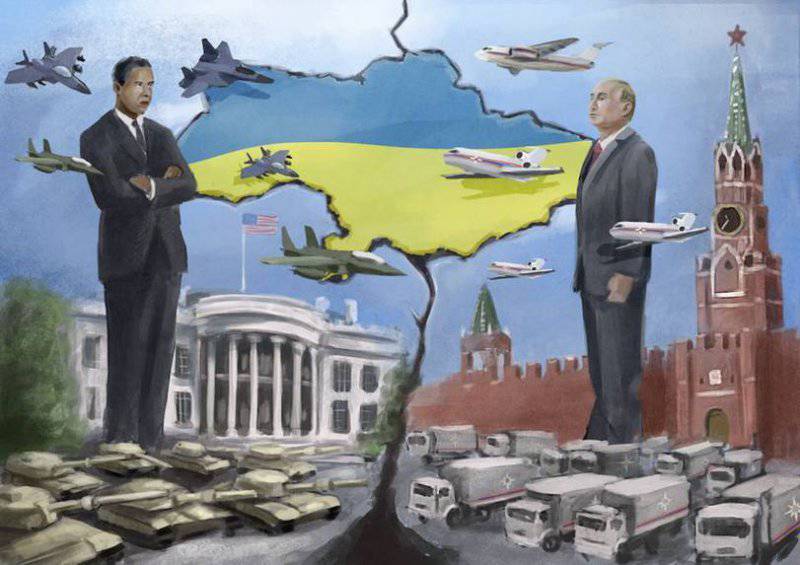 Has the United States achieved success in destroying Russia, thus trying to preserve dollar hegemony? This question was asked by Clive Mound in an article of the same name.

According to the trader, there are two reasons why the United States "made" Russia its enemy.

First, the US military industrial complex, which has a powerful lobby, is interested in such conflicts to promote its deadly products. Lobbyists wish that the "military order book" of US military corporations be complete. Corporations need an external enemy in order for the government to give the go-ahead to the next launch of the arms race.

Secondly, the very real threat to throw a dollar out of the list of world reserve currencies actually means “the end of the American empire”. The “battle” is for maintaining the global hegemony of the dollar, and at the same time maintaining the economic, military, and political dominance of the United States on the planet. The analyst believes that now is the end of this struggle.

The United States is parasitic on the outside world, says Mound. Washington stamps debt instruments and takes money out of thin air. Only by having a world reserve currency at its disposal can a state afford “astronomical deficits” that would make any other country insolvent. With the loss of the status of the reserve currency “the economy of the United States will explode,” and Washington will become the capital of the “banana republic,” the author is sure.

Today, the biggest threat to dollar dominance comes from Russia and China. These states have recently concluded various currency and trade agreements that ignore the dollar. Consequently, there is a serious threat to the status of the dollar as a key currency.

Washington is particularly worried about Russia, which has made a number of significant steps to trade outside the dollar.

What can the White House oppose to the Kremlin?

To attack Russia and bomb it? Impossible: Russia is not Libya, and it has a nuclear weapon. So this is not an option, writes the analyst. Maybe try to "undermine the Russian government from the inside and ignite the revolution"? But this will not work either: Russian special services are good at “eradicating saboteurs”.

The third option to combat Russia is an economic blockade. Hence, the sanctions aimed at isolating the country and weakening the economy of Russia. True, there were no suitable excuses for the sanctions. And not only excuses: it seems that the sanctions simply "will not work." Moreover, those "madmen" from Europe who dance to the tune of Washington will suffer from them.

The author believes that “the Russian economy is very large” and, if necessary, it can work on a self-sufficient basis. Moreover, Russia has oil and gas. In addition, Russia has a strong neighbor, China, who knows perfectly well what will be “in the line of fire” after Russia, and therefore “happy” to agree on mutually beneficial cooperation with the Russians.

Further, the expert writes that the current situation in relations between the USA and Russia (and in the future between the USA and China) is potentially very dangerous. Are the US elites and the leaders of NATO "insane enough to start a world war"? ..

What is happening in the east of Ukraine, the American propaganda deliberately presents in black. Meanwhile, life in the Donetsk and Lugansk regions is very difficult. Cities and villages were ruthlessly fired upon and today practically have no electricity, water or food. Many of these people are either Russian-speaking or of Russian origin. And it’s quite natural for Russia to come to their aid. However, the American media raised a false howl about the humanitarian Russian convoy. Western media do not want the people of the West to know the truth, said the publicist. However, the accusations of Russia from the Western media that this convoy allegedly has military objectives are absurd: try to squeeze a tank or an armored troop-carrier into a mid-size truck, ironically Mound. Washington’s protest that the Russians “violated the territorial integrity of Ukraine” by entering there by truck is hypocritical. This is nonsense. And didn’t the United States invade Iraq under the false pretext of the mythical “weapons of mass destruction”?

On the example of a humanitarian convoy, the author writes, we see an excellent example of propaganda, the purpose of which is to distort the position of Russia and set this country as the aggressor. Further, this will be a “justification” for the further tightening of sanctions.

But why is the US so worried about what is happening in Ukraine? After all, this country is on the other side of the globe! What, B.H. Obama considers himself to be something like Julius Caesar? Even so, Russia and China are not part of the American empire. These US states do not enslave: they are too large and able to protect themselves with nuclear weapons. And if they manage to overthrow the dollar, the American empire - with its inner rot, huge debts and “hopelessly corrupt government” - will collapse.

“It’s hard to exaggerate the stupidity of Europe serving the US and imposing sanctions on Russia,” the author writes. Trade war is nonsense! Russia is not a banana republic, but a great world power, the analyst points out, and the imposition of sanctions against it is a “gross insult” and a provocation that will have disastrous consequences, especially given the fact that the Russians are now allied with the Chinese.

If anyone loses something, it is first and foremost Europe: the analyst considers its economy "already very fragile." In addition, in Europe, ultra-right political parties are rising one after another, which can provoke internal European wars. Russia and China will probably only benefit from all this.

The author considers the “rabid propaganda” in the Western media “coarse and primitive” - such that even the “maestro of Nazi propaganda, Dr. Goebbels” would turn red from it.

So did the United States achieve success in destroying Russia, thus trying to preserve the dollar hegemony?

No, it is not reached, the expert answers. And this means that the dollar will probably collapse right after his swan song, which should be called “Death of Europe”.

By the way, let us add to this, experts predict a ruble appreciation by the end of 2014, despite Western sanctions against Russia.

As the RBC, by the end of this year, the dollar exchange rate may be 36,9 rubles, and the euro exchange rate - 48,2 rubles. These are the indicators of the consensus forecast compiled by RBC based on the forecasts of twelve investment banks.

Nevertheless, banking experts are convinced that by the end of the year the ruble will recover all the losses.