Priest Vladimir Moretsky, who was in Ukrainian captivity, spoke about the atrocities of the national guardsmen

17 September 2014
42
The priest from Lugansk, Archpriest Vladimir Moretsky, who was released from the Ukrainian captivity on September 15, spoke about the atrocities of the national guardsmen who brutally tortured him and other militiamen. 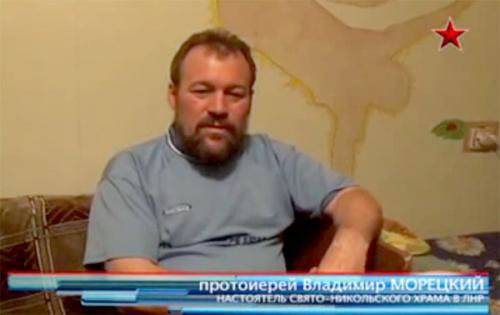 “To say that we were beaten is to say nothing. We were killed. We were shot, our bones were broken, we were beaten not only with our hands and feet, but also with rifle butts and all available means, ”the words of Moretzky "Reports from the militia of New Russia".

The priest also noted that “Nadezhda Savchenko, who is currently imprisoned in the Russian Voronezh, has especially manifested herself”.

According to him, during the torture, they tied their hands behind their backs, and then put their faces to the wall and beat them.

A militia fighter Stanislav Stankevich, who has a reminder of the terrible days of imprisonment left on his body, was also released from captivity - the National Guard under militants burned a swastika on his skin. In addition, he was constantly beaten and starved. He could only get home after exchanging prisoners.

“They offered to conduct a sabotage group in Shakhtersk. I refused. Naturally, they were beaten, and when they realized that nothing would come of it, they began to torture me. I wrote an explanation of who I am. They did not like it, copied it twice. In the end, they realized that it was useless. I was in such a state that they would never have recognized me, ”he said.