Multi-tower tanks of the USSR. Part of 1. Double Towed T-26

17 September 2014
18
The USSR was essentially the only country in the world in which multi-tower turrets were adopted. Tanks various types. Not so long ago, restorers of the Central Museum of Armored Arms and Equipment of the Ministry of Defense of the Russian Federation in Kubinka near Moscow completed the restoration of the heavy five-turret T-35A tank. This is the only example of such a machine that has reached us. The T-35 was the last multi-tower tank mass-produced in the USSR, and the first was the T-26 twin-turret, which was a direct descendant of one of the most common tanks of its time - the Vickers Mk.E, aka the Vickers 6-ton.

In the first half of the 1930-s, the design of multi-turbo combat vehicles in the USSR began. The impetus for the work in this direction was the purchase in the UK of 15 twin-turreted Vickers Mk tanks. E in 1930 year. It was a cheap tank of simple design, which attracted the Soviet military. Acquired tanks had only machine-gun armament - Vickers machine guns caliber 7,7 mm. The turret of the tanks were located in the center of the hull on the side of each other. They could fire to the left and right sides at the same time, while the disadvantage of this design was the inability to concentrate the fire of two existing machine guns on the same target.

Tanks Vickers Mk. E were also known as "six-wheeled car", the name of the car received because of its mass. The tank was equipped with a four-cylinder carburetor engine Armstrong-Vickers Puma, which has air cooling. This engine could develop power in 92 hp At the same time during operation the engine could overheat, and sometimes it became the cause of a fire. At the same time, the English car had a very good maneuverability, range and smoothness. The range of the life of the tracks was approximately 4,8 thousands of kilometers. This result significantly exceeded the similar indicator of the majority of tanks of those years. From the combination of the characteristics of the tank to create a positive impression in the Soviet Union and served as the basis for the development of the Soviet analogue - T-26. 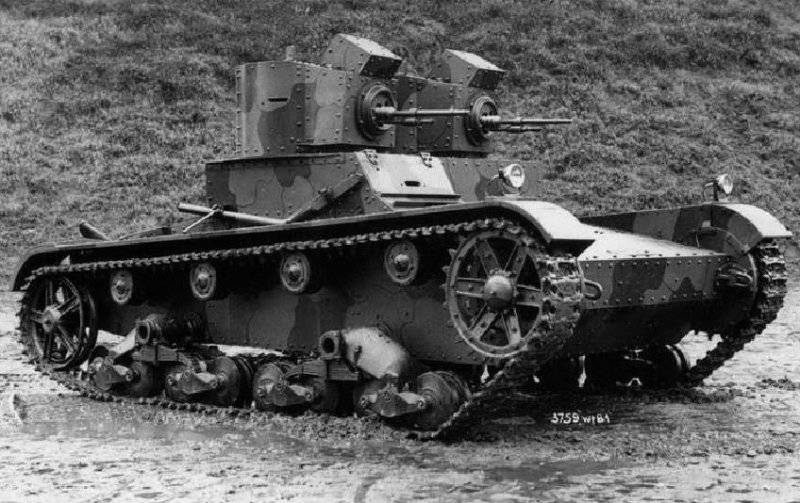 13 February 1931 of the year issued a decree on the adoption of the Vickers E tank under the designation T-26 into service with the Red Army, and it was recommended to launch its mass production. The main platform for the production of these tanks was to be the Stalingrad Tractor Plant (STZ), where it was planned to produce 13 800 tanks each year. At the same time, such a release plan was initially utopian, and by that time the plant itself was not even put into operation. For this reason, it was decided to start production of the tank at the Bolshevik plant in Leningrad. Soon, the tank department of the plant was allocated to an independent plant number 174 Voroshilov.

The greatest difficulties in the USSR arose with the release of the engine for this tank. The level of marriage at the beginning of its release in Soviet factories reached 65%. For this reason, Izhora plant, which was engaged in the release of armor for the tank, was forced to switch to the release of 10-mm armor plates instead of the original 13 mm thick. This was done in order to reduce the overall weight of the vehicle and, accordingly, reduce the load on the engine of the tank. At the same time, the first armor plates did not differ in their special workmanship; for this reason, they were mounted on bolts and screws for quick replacement. The crew car consisted, as well as at Vickers Mk. E, from 3's people. 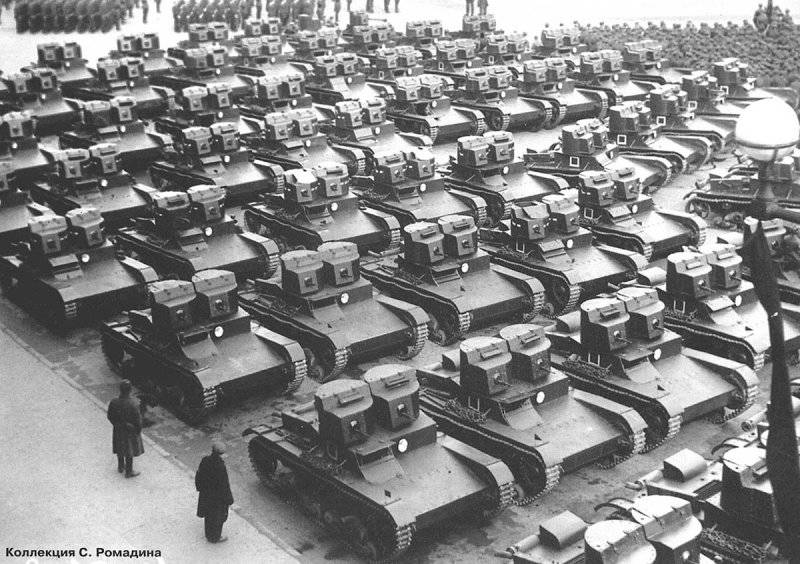 The first 15 tanks were assembled in August 1931 of the year, in the autumn of the same year, the first vehicles hit the combat units. The tanks received towers of slightly increased height with a viewing hatch, as well as slots in the upper part. Until the end of 1931, it was possible to assemble all the 120 serial tanks, while due to the marriage with the engines, most of them could not move independently. Later, the marriage was eliminated, but the military accepted only 85 tanks, of which 35 was conditional, since the armor installed on these tanks did not meet the stated requirements. In the future, due to the constant process of improving the design of machines, most of the shortcomings were corrected.

In the double-turbo version, the T-26 tank was produced before the 1933 year, after which the designers of the vehicle decided to finally move to the single-turret scheme. At the same time, by the end of production, double-turbo tanks received armor as thick as 15 mm, as well as mixed all-welded and riveted-welded hulls. Air-cooled engines moved closer to the tank aft, and new oil and fuel tanks appeared on the car, as well as a duct above the air inlet grille, which was supposed to protect the engine of the tank from various sediments. In total, for the time of release the army had tanks T-1627 26 in the two-tower design.

In the double-turret version, the tanks produced 2 of the year. They became known as the T-26 tanks of the 1931 model and the 1932 model. Later, single-tower T-26 with a cylindrical turret (samples of 1933-1937's) and single-tower T-26 with a conical tower (samples of 1938 and 1939's) were produced. In the double-turbo versions in each of the towers was a 1 crew member. At the same time, the towers could rotate independently of each other in the 270 ° sector. By the beginning of World War II, various versions of T-26 tanks, including twin-turreted vehicles, formed the basis of the USSR tank fleet — up to 9 thousands of such tanks were in service. 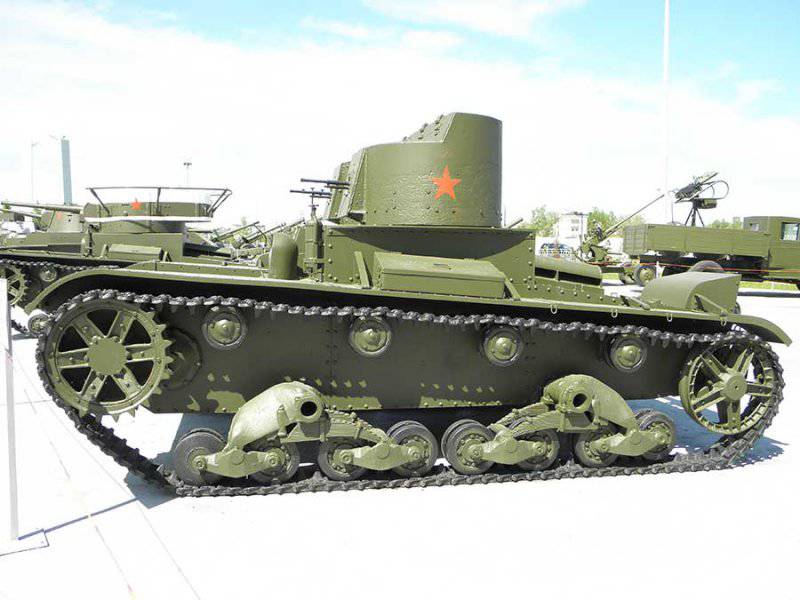 The armament of the two-tower T-26 consisted of two 7,62-mm machine guns DT-29 or 37-mm gun and one machine gun DT. In this case, initially tanks equipped with cannon armament, intended for platoon and company commanders. Therefore, some of the cannon samples received receiving and transmitting stations. The radioactive T-26 tanks could be easily distinguished by the characteristic handrail antenna located in the rear of the hull. The body of these versions of the tank was riveted and had a box section. On the lined box with a vertical frontal sheet on special ball bearings were placed two towers having a cylindrical shape. The tank driver was located in the front of the tank hull on the right side.

Attempts to equip the machine with cannon armament were made from the very moment of its adoption into service. Already in the spring of 1931, the chief designer of the tank, S. Ginzburg, proposed to put an 37-mm gun into one of the towers. However, in 1931, this solution failed to pass through all the necessary instances. The military believed that the two-tower scheme of the tank is more suitable for the use of machine guns, as it allows to carry out tasks for "cleaning the trenches." Indeed, the twin-turret T-26 machine-gun tank, having reached the line of defense of the enemy, could stop over the trench and, deploying the towers in different directions, carry out their “sweep”.

But already at the beginning of 1932, the issue of reinforcing the armament of the machine was resolved in a positive way. The machine gun T-26 was too limited in use, it could not hit enemy firing points at a great distance, and also effectively defend against the attacks of enemy tanks. Already in March, the X-NUMX of the T-1932 tank was delivered to the Artillery scientific test experimental ground, instead of the right machine-gun turret of which the small gun turret of the X-26-35 experimental tank T-1-2 was mounted. 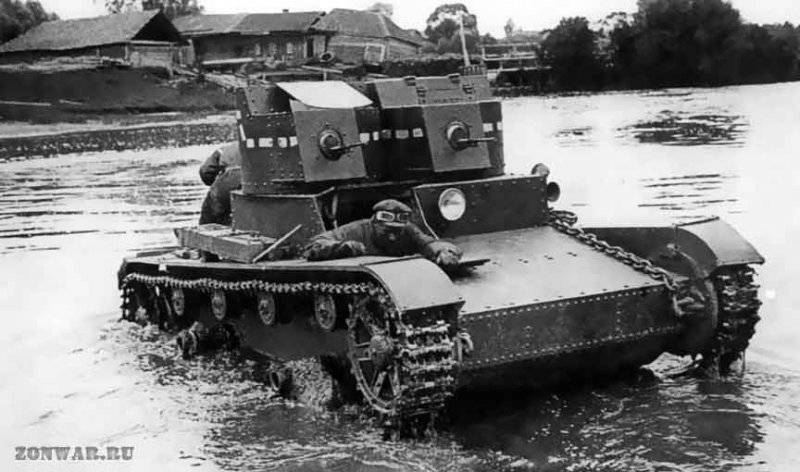 This tower has been tested by running in and shooting and has shown generally satisfactory results. After completing the tests, the turret from the tank was dismantled and installed on the T-35-1. In April of the same year, the small gun turrets from the T-35-1 were tested on two more T-26 tanks. After the tests were completed, it was recommended to arm this way a number of T-26 tanks.

For those years, the PS-2 gun had quite good characteristics, but it was not adopted by the Red Army. For this reason, the Main Artillery Directorate recommended the use of another 26-mm gun, the B-37 (3K), which was created on the basis of the German Rhine Metal company, for armament of double-T-5 tanks. Compared with the PS-2 gun, the new one had smaller breech sizes and a smaller recoil, which made it possible to mount it into a full-time machine-gun turret of the T-26 tank, almost the meringue reworking of the latter.

But on this leapfrog with possible guns did not end. Plant №8 Kalinin was not able to organize production of guns B-3 in the required amounts. In addition, starting from the summer of 1932, all the B-3 cash cannons were used to arm the BT-2 wheeled / tracked tanks. Therefore, in the final version, PS-26 guns (or Hotchks-PS) guns were put on parts of T-1 two-turreted tanks, which were well mastered by Soviet industry. In this case, the guns of the B-3, standing on some twin-tower tanks, were dismantled. 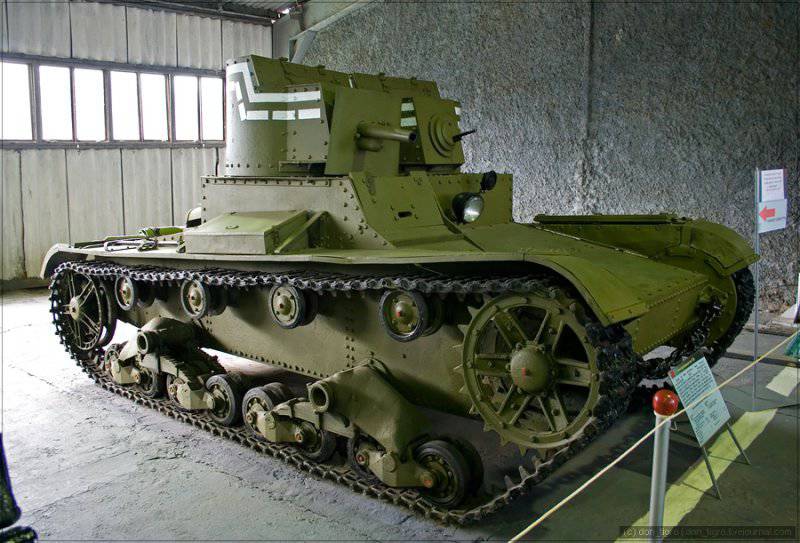 There is no exact information on how much all the two-tower tanks with cannon armament were made. According to the plans for retooling 37-mm, it was planned to equip every fifth tank with a weapon. According to 1 on April 1933, the Red Army consisted of 1407 T-26 twin-turbo tanks, of which the 392 tank had gun armament. Considering the fact that 1931 T-1933 tanks with two turrets, as well as a number of PS-1627 cannons were launched from 26 to 1 years, we can assume that all guns received about 450 tanks.

In the 1937-1938, all T-26 cannon double-turreted tanks were deemed not to meet the requirements of the Red Army. They were transferred to the category of training and combat vehicles, besides, shells to the 37-mm gun were not produced at that time. In April, 1940, the final decision was made on the removal of such tanks from armament and their subsequent conversion to repair vehicles, armored personnel carriers and tankers. However, beginning in 1940-1941 years of large-scale deployment of the mechanized corps are not allowed to carry out these plans.

At the same time, the T-26 tanks in double-turret performance almost did not participate in hostilities. Most often they were used in the role of commander or reconnaissance and patrol tanks. In August, 1938, such vehicles from the 2 th mechanized brigade and the 40 th rifle division took part in delivering a counterattack against Japanese troops in the Zaozernaya and Khamozyannaya hills in the battles of Lake Hassan in the Primorsky Territory. The tanks were used for stripping Japanese trenches, standing in front of them and firing machine guns on the left and right sides. At the same time, in the course of the hostilities, according to various data, from 9 to 17 T-26 tanks were lost. 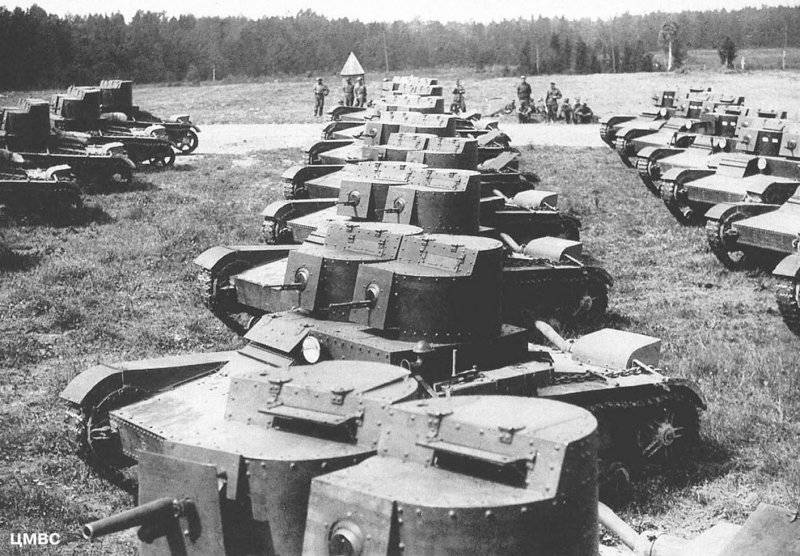 A number of tanks took part in the Great Patriotic War. Of course, the double-tower cannon T-26 practically could not with the German tanks: the armor penetration capability of the PS-1 was very low, besides the projectiles to it were deficient. Often these tanks were forced to be used as machine guns. In addition, many cars were already very worn out and often failed due to technical malfunctions. Most of them were lost in the battles of 1941 of the year, although individual instances remained in the army in the spring and summer of 1942, some of which were subjected to serious alterations.

Only one sample of the T-26 two-turret tank, equipped with cannon-machine gun weapons, which can now be seen by visiting the famous Militaryhistorical Museum of armored vehicles and weapons in Kubinka.