17 September 2014
21
The ultimate goal of US policy throughout the world is to destabilize as many states as possible and entire regions. Libya, Ukraine, Iraq. In Syria did not work. Almost a year ago, the United States promised to attack Syria, since the “Assad regime” allegedly kills its citizens with chemical weapons.

Russia did not give. The president of our country proposed a solution to the problem: Syria hands over chemical weapons to the West. And the US strike did not take place. In 2013 year.

In 2014, the Americans are making a “second attempt” to destroy Syria.

The reason for this, this time, is completely different. 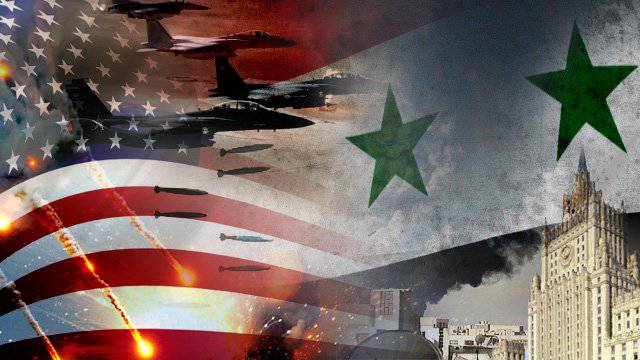 In 2013, the US was going to bomb Syria to fight the “bloody regime” of Bashar al-Assad, who in a strange way allegedly fired chemical weapons on civilians right before the arrival of the UN observers. Who remembers the events of that day - from the evidence of the "atrocities" the USA showed vague videos from the Internet with fleeing Arabs and convulsive children. (It will take a year and the United States will blame Russia and the militia of New Russia for shooting down a Boeing based on ... Facebook posts and commercials from Ineta.)

So - the invasion of Syria broke down. The Syrian militants who remained without NATO air cover began to lose and could not achieve victory.

And suddenly events began to develop in a different direction.

Militants moved to Iraq, occupied a large part of the country, seized weapons and ammunition. According to Western media, they have seized a lot of money in banks.

At this offensive, the US militants did not render them any resistance. Why? Yes, because they helped them in Syria.

At this stage, all the “independent” world media have joined the PR of the “danger” for the West. The organization of ISIS has become famous for a few days. Reports, stories, shots, whole movies. Two months ago nobody knew this structure, today everyone knows.

The danger is shown by the face - here it is, the new enemy of the "free world." But the enemy is far away. What is the difference to the western man from what is happening in Iraq or Syria?

It is necessary to make the danger tangible and visible. In 2001, for this purpose, the US intelligence services themselves blew up the Twin Towers and carried out a suspicious attack in the Pentagon building.

Now another option has been chosen.

These shots showed all the media. The result is logical - indignation in the West. Following Obama's statement about the need to strike in Syria, where the bases of ISIL militants are allegedly located. And the help to "good" militants in this country against the "bad" militants.

We are confronted with a classic provocation: because of the killing of several people, the United States gets a reason to bomb Syria. Only now they can do it not under the pretext of fighting against Assad, but to fight against terrorists and murderers.

How does this differ from the 11.09.2001 attacks of the year that gave rise to the invasion of Afghanistan and Iraq? Nothing.

In any case, an attack on a country's territory without the permission of a legitimate government is aggression.

It does not work out like that, we climbed into Syria that way.

And cut off heads are nothing but a reason for invasion. And to arrange such a reason is no more difficult than any other provocation. Even easier.

After the US strike on Syria, the militants will get a "second wind". After all, who is bombing the States will decide the States themselves. The blow will be inflicted on the Syrian army and will be beaten until "democracy prevails." That is, until the "good" action films win.

The total needed by the USA will be reached.

Another state will be destroyed and the forces of chaos and destruction will prevail in it.