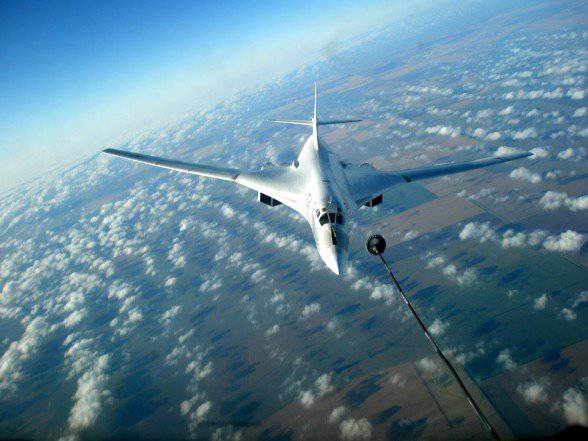 Air refueling is not only one of the most difficult elements of the flight, but also the most favorite parts of the audience of the air show. Unfortunately, the pilots do not demonstrate it as often as we would like - this process is not only complicated, but also very dangerous, because the planes approach each other at a distance of 20 meters. No less fascinating and история development of the idea itself.

It is believed that the authorship of the idea of ​​refueling in the air belongs to Russia. It was launched in 1917 in our country and patented in 1921 in the USA by a Russian emigre, test pilot, and subsequently by aircraft designer Alexander Prokofiev-Seversky. 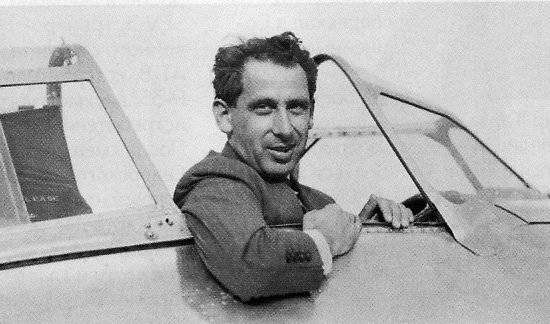 However, in the world to carry out refueling in the air began in 1912 year. It looked very funny: a canister of gas was simply transferred from one airplane to another. Then they began to adapt for this a hose that was dropped from one plane and manually caught on the other. Pumps, of course, have not yet been invented, the fuel came down just under the influence of gravity.

The first successful refueling of this kind occurred on June 27 of the year 1923. It was carried out by USAF pilots (US Air Force). We carried out refueling from wing to wing between two Airco DH.4 aircraft. 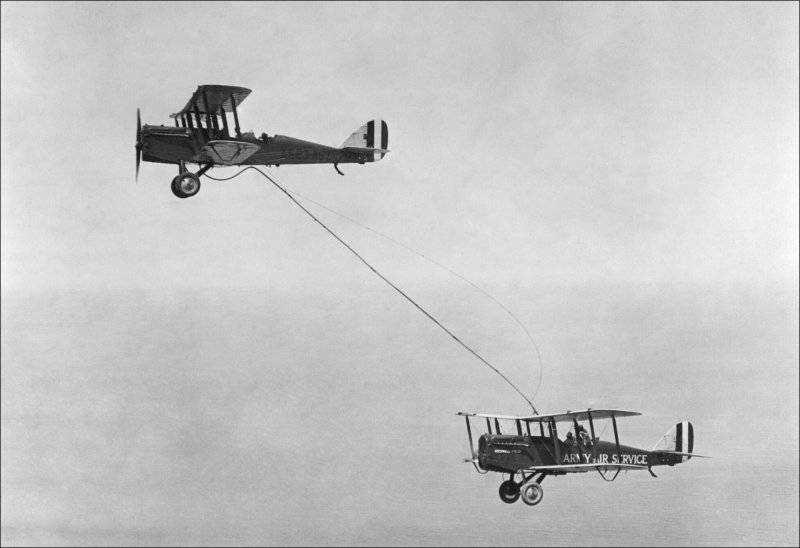 The first ever in-flight refueling between Airco DH.4 aircraft. 27 June 1923 of the year

The era of competition began for the longest duration of flights without landing. Having started in the same, 1923, the year from the 37 watch with nine refueling, by the middle of 1930 the American pilots learned to stay in the air for several weeks.

In 1935, the Fred and Al Key brothers set a record for non-stop flight on the Curtiss Robin aircraft: 653 hours and 34 minutes (more than 27 days). They took off on June 4 and landed on July 1. Food pilots lowered on a rope. Engine maintenance was carried out also on the fly. For this, a special platform was equipped around the motor, to which, if necessary, one of the pilots was selected. 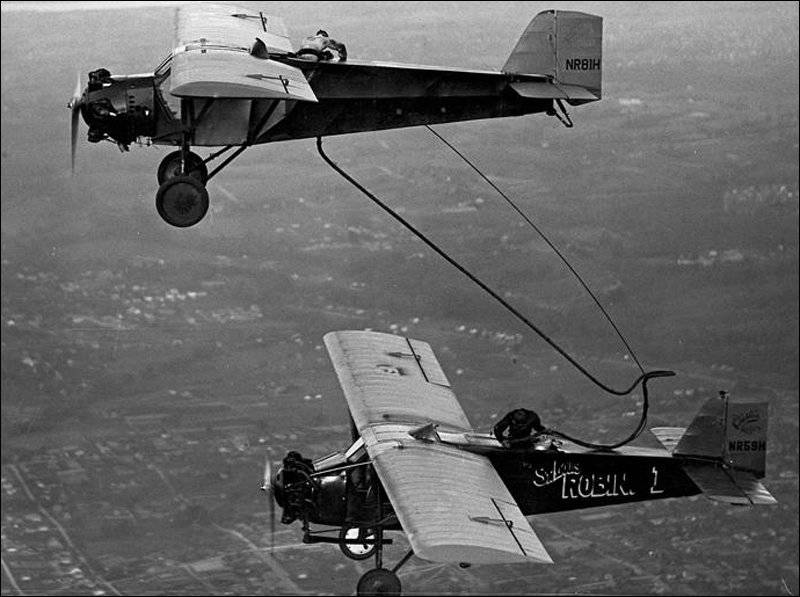 The existing method of refueling (a hose with a conventional filling gun) was extremely dangerous. A pistol could at any moment pull out of the fuel filler neck, and a jet of gasoline flew straight to the hot engine block.

This process does not look much simpler now. It is hardly necessary to explain that in-flight refueling is carried out only on army aircraft. Passenger this is likely to never allow. Firstly, for security reasons. And secondly, because of the uselessness - they do not have such long and secretive flights as the military.

But back in 1930. In the UK, the famous English pilot Alan John Cobham developed the world's first real air refueling system in the 1934, consisting of a cable with claws, harpoon and hose. To improve his system and the production of relevant equipment, he founded the company Flight Refuting Limited (FRL). The company, by the way, still exists.

In Russia, the idea of ​​creating aircraft tankers began to actively develop at the turn of the 1930-x. At its origins stood the famous aircraft designer Vladimir Sergeevich Vakhmistrov. The first successful tests were carried out by him in the 1932 year.

However, until the beginning of the Cold War, the development of methods of refueling was more likely a competition of individual enthusiasts. And the main purpose of the inventors was not its military use, but transatlantic commercial flights. 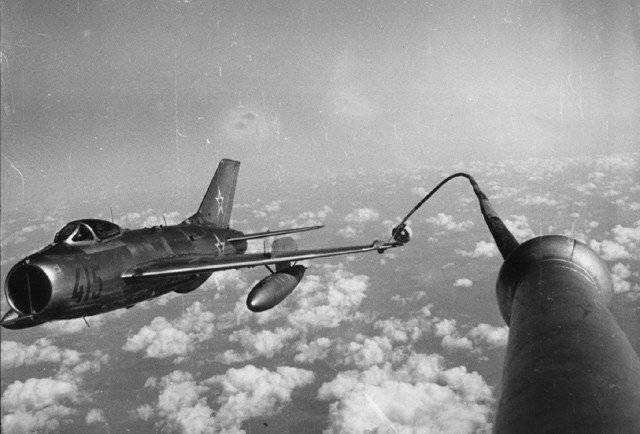 Appearance of nuclear weapons made the governments of different countries, primarily the USSR and the USA, think about finding ways to increase the radius of action for strategic and tactical aircraft aviation. Refueling studies have received state status.

In the Soviet Union, work was carried out on different types of aircraft, in different design bureaus. Including the same Vakhmistrov, who successfully developed the ideas of the British company FRL.

Two test pilots, Igor Shelest and Victor Vasyatin, developed their own “wing-to-wing” in-flight refueling system. Their invention was also based on the method proposed by FRL, but it turned out to be much more efficient and simpler. Subsequently, it was taken as a basis and massively used in the Soviet Air Force until the end of the 1990-s.

The system “from wing to wing” was used only in the USSR and only on Tu-4 and Tu-16 aircraft. No other country used this method - it was still too risky. 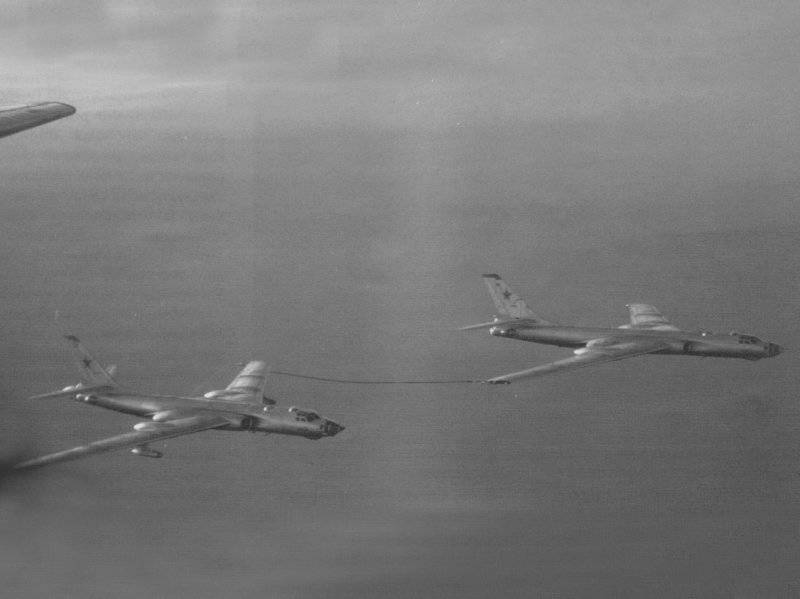 Refueling in the air Tu-16P

The hose – cone – rod system has become much more widespread in the world. OKB-1952 was engaged in its development since the end of 918. Now it is - the famous Scientific-Production Enterprise (NPP) "Star" named after academician G.I. Severin, part of the holding "Aviation Equipment".

The basis of the “hose – cone – rod” system consisted of the developments of the Vladimir Vakhmistrov group, which continued its activities in OKB-918. In 1953, the Vakhmistrov system passed successful tests in the process of simultaneously refueling in the air two MiG-15 fighter jets from the tanker Tu-4. Cables were not used. Two refueling points were located at the wingtips. Produced hoses with cones docked with special telescopic rods mounted on the nose of the fighter.

In the middle of the 1950-x, when the problem of refueling fighters lost relevance, this system was adapted to the bombers. And above all, under the strategic M-4. Smaller-sized Tu-16 began to be used as a tanker aircraft. 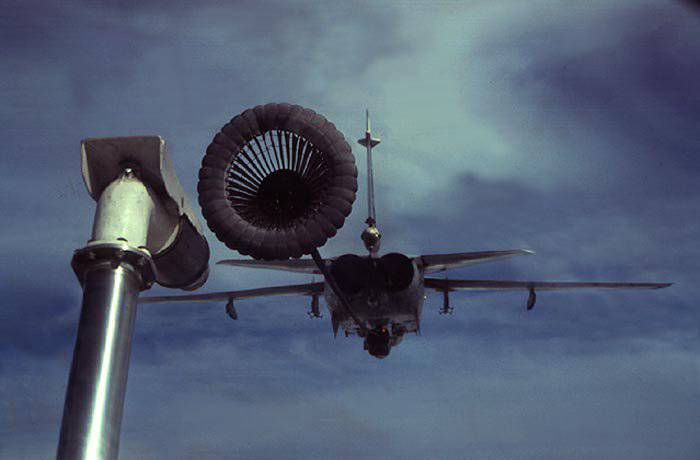 With the advent of a new Su-24 front-line bomber (1975 year) in the Air Force, scientists were faced with the task of developing new ORPS (unified overhead refueling units) especially for him, that is, suspended, because Sukhoi does not have a bomb compartment. The tanker for him was IL-78. 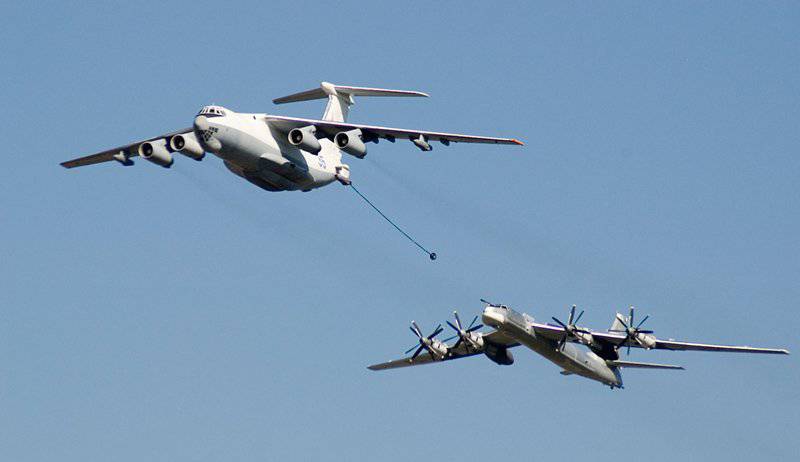 From the end of 1980, all the newly developed tactical aircraft began to be created taking into account possible air refueling: Su-24М, MiG-29, MiG-31, Su-27 family, some MiG-25, "heavy" Tu-95MS, Tu -160, A-50, IL-80. The tanker regiment also arrived: fighter tankers appeared and, of course, the hope and support of Russian strategic aviation — the modified IL-78M.

The average fuel intake time in the air refueling process reached six minutes for the helicopter, 20 for the bomber and 45 for the tanker. 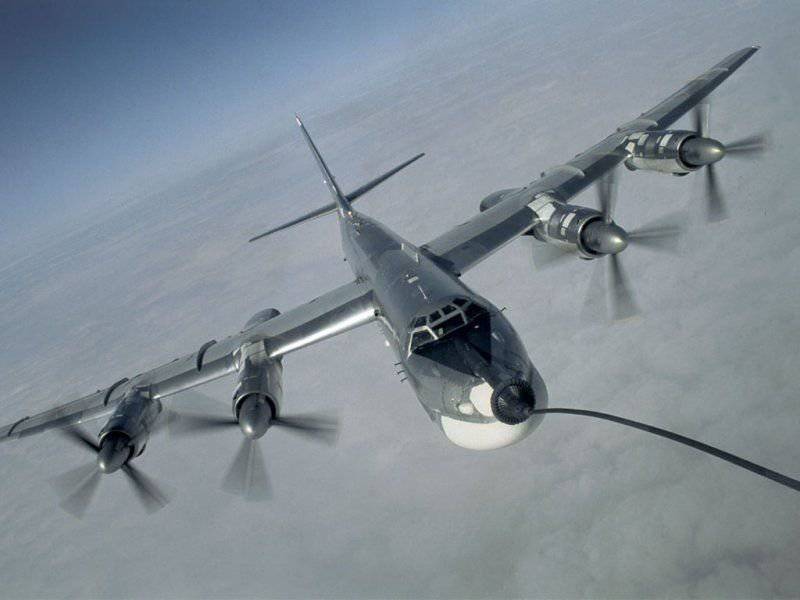 The only enterprise in the country that develops refueling systems is SPE Zvezda. Currently, both receivers (heads of fuel receivers) installed on the booms of refueling airplanes, as well as several modifications of UPAZs for tanker aircraft are available: with hose length from 26 to 28 meters and overflow capacity from 1600 to 2900 liters per minute. 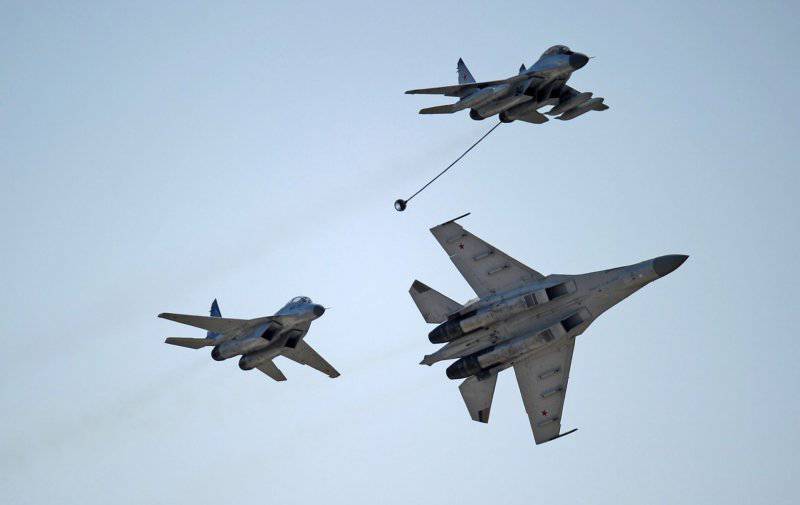 Whether Russia needs transporting refueling planes and detachable fueling equipment is, of course, a rhetorical question. From Kaliningrad to the easternmost point of Russia, Ratmanov Island is about eight thousand kilometers. Do not forget about the possibility of attracting our aviation to solving problems with the need to fly across the oceans. And given the fact that now for the Air Force of the Russian Federation the process of in-flight refueling is a rather rare event, the task of developing these systems becomes even more urgent.