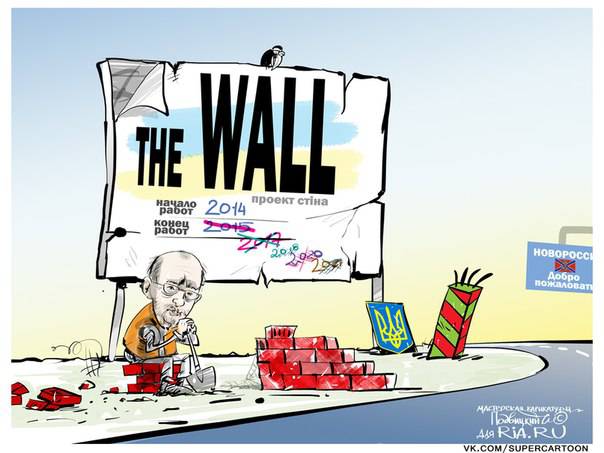 On September 5, the Ukrainian government approved the Wall project. As part of this project, it is planned to equip the border with Russia and isolate itself from it, ostensibly to avoid aggression. Talk about the possible construction of various fences on the Russian-Ukrainian border has been going on for the past few months, but until recently it all remained at the level of discussions. Now, the Ukrainian specialists have completed the elaboration of the project, and the government has approved an action plan. It is noteworthy that, despite the seriousness of Kiev’s intentions, the Wall project immediately became a subject of offensive jokes.

Indeed, in the present conditions, the construction of a wall on the border with Russia does not look like the most important and necessary project. Ukraine's economy is collapsing, the situation of citizens is deteriorating, and battles are taking place in the eastern regions. In such a situation, attention should be paid to many things, but not to equip the border. However, this is not a reason to immediately respond to the “Wall” project as a deliberately disastrous one and without any prospects. Consider the proposal of the new Kiev authorities and try to determine its pros and cons.

The border of Russia and Ukraine has a total length of slightly less than 2300 kilometers. In all land areas it is planned to build a large number of different structures, which will receive special equipment. The scope of the proposed work is so large that the total cost of the project has not yet been determined. The cost of the Wall is estimated to be at least several billion hryvnias — at hundreds of millions of US dollars. It is planned to build all the required facilities in 56 months (a little over 4,5 years).

Part of the border of the two countries is currently controlled by the militia of New Russia. For this reason, in Kiev they propose to build the Wall in two stages. During the first, new structures should appear on sections of the border controlled by the frontier service of Ukraine: on the borders of the Chernihiv, Kharkiv and Sumy regions, as well as the Luhansk region to the village of Melovoe. In addition, the border with the Crimea will be equipped. The second phase of construction is planned to be carried out after the successful completion of the “anti-terrorist operation”. During its implementation, the corresponding structures will stretch from the Cretaceous to the shores of the Sea of ​​Azov.

On land it is supposed to equip the border as follows. Directly along the border, a ditch will be dug up to the width of 4 m and depth to 2 m. There will be an embankment beyond the moat, beyond which the control-trace strip will be plowed. After it, a dirt road will be laid and a metal fence will be installed. Along the border every 20 kilometers it is proposed to build watchtowers with a variety of equipment to monitor the situation.

In this way, the border will be equipped in “quiet” areas. The border with the Crimea will be equipped in a similar way, but there are no plans to dig ditches. In the case of “particularly dangerous areas” in the Donetsk and Lugansk regions, infrared cameras will also be installed at the border, which are supposed to help improve the detection of intruders.

In order to avoid "aggression" from the sea in Kiev, they propose to equip the coast accordingly. From Mariupol to the Crimea, a control and trace strip and a complex of motion sensors will appear on the shores of the Azov Sea. In addition, new fortifications will appear on the coast, which will be assigned anti-amphibious defense functions.

The total cost of the Wall project has not yet been determined. However, a few days after the approval of the project, Prime Minister of Ukraine Arseniy Yatsenyuk told about the beginning of its financing. The construction of the first structures was allocated 100 million hryvnia. New should follow this first tranche.

Even on the surface it can be seen that the Wall project will be very expensive and complicated. In the current economic situation, Ukraine is unlikely to be able to fully implement it. Probably, in Kiev they understand this, as some statements by officials may indicate. For example, the deputy head of the State Border Service, Pavel Shisholin, said that Ukraine intends to seek help from European states. He called his country the eastern border of the European Union and therefore, as he believes, “they must invest the appropriate money in it”. Indeed, foreign countries are ready to provide all possible assistance. A few days ago it became known that the United States could transfer 2,5 thousand barbed wire coils to Ukraine with a total value of 435 thousand dollars.

It is interesting that the Ukrainian government approved a project to build the most common means of border protection, but President Petro Poroshenko described other plans a few days ago. According to him, a layered defense line with positions for tanks and troops, communications, etc. P. Poroshenko also said that a similar line of defense should pass both along the border with Russia and along the line of “direct resistance to the militants”. A little later, the press service of the headquarters of the so-called ATO disclosed some details of this proposal. In accordance with it, it is planned to equip about 1,5 thousand kilometers of trenches, trenches and communication routes, dig 8 thousand trenches for equipment, build 4 thousand dugouts and install a 60-km “unexploded fence” in one of the sections.

It is not hard to guess that such border equipment will be several times more expensive than the approved project: the construction of fortifications and positions for the troops will require investing up to several tens of billions of hryvnias. The probability of successful implementation of such a project is extremely low - Ukraine may not have enough money even for the “classic” equipment of the border with ditches and control and trace strip.

It should be noted that the project of equipping the Russian-Ukrainian border can have positive consequences. Naturally, this is not a defense of Ukraine against the mythical Russian aggression, but more realistic things. First of all, it should be noted that, thanks to the implementation of the Wall project, the border between the two countries will finally be equipped. A quarter of a century after the collapse of the Soviet Union, part of the border between Russia and Ukraine exists only on paper. Thus, the work of Ukrainian builders will lead to an equipped border. This will complicate the lives of various border trespassers crossing it in both directions, as well as simplify the work of border guards.

The implementation of the Wall project can have positive economic and social consequences, which is given as an argument in its favor. For the construction of a wall of several thousand kilometers will have to mobilize several industrial enterprises. In addition, new jobs will be created for builders. Due to this, it is alleged that the Wall project is useful not only from the point of view of the country's security, but also in terms of the economy.

Nevertheless, the project’s existing drawbacks seem to completely outweigh all its positive aspects. The main problem of the Wall project, as well as the proposals of Poroshenko and the headquarters of ATO, is its cost. Even in peacetime, the construction of such complex structures would have taken a lot of time and would “burn through” a solid hole in the budget. Under current conditions, the construction of the Wall is turning into a completely unhelpful economic plan. In addition, one should not forget about corruption, because of which the total cost of border equipment can increase significantly, if it does not grow several times.

The construction countries may be assisted by European countries, but they are not interested in this. European capitals have their own interests, and support for Ukrainian projects is not included in them. For this reason, overseas aid can be limited to American barbed wire and moral support.

The next problem is the boundary line. Before construction begins, Kiev and Moscow will have to demarcate the border and pinpoint it. Until this difficult and lengthy process is completed, any attempt to build the Wall may give rise to complaints from Russia.

The Wall project can have not only positive social consequences. The fact is that at the present time the border between the two countries literally halves several small settlements. Thus, now they will have fences and other attributes of the equipped border. As a result, either the state will have to build checkpoints, or residents will be forced to make a detour and go to the nearest point, and then return to another part of their village or village. It is unlikely that the locals will be happy about this.

Finally, it is worth considering one interesting feature of P. Poroshenko’s proposal regarding the construction of a full-fledged defense line, such as the “Mannerheim Line” or “Maginot Line” that were built in the past. For all its complexity and high cost, such a defensive complex will not be able to carry out the tasks assigned to it. If you imagine that Russia will still decide to attack Ukraine, then various objects of the defense line will become priority targets for missile systems and aviation. Thus, the resistance of this line will be broken within a few hours. After the destruction of the main enemy targets, ground forces will be able to enter the battle, which, with the support of aviation, will quickly break through the remnants of defense and cross the line. Thus, a full-fledged complex of defensive structures along the border will lead to enormous costs, but by definition will not be able to fulfill its task.

As we see, the proposed border equipment plans have several positive features, but they are not without a whole set of problems. Moreover, the main problem of projects, namely the extremely high cost, can put an end to all existing plans. No less interesting is the fact that the proposed construction of fortifications and positions for the troops, for all its high cost, will bring almost no benefit. Thus, even before the construction began, it became clear that the Wall project has no prospects, but represents a serious threat to the budget of Ukraine. If such projects are beneficial to someone, then only corrupt officials who are directly interested in the "development" of allocated funds.