The war in Ukraine: the continuation of fighting or truce? 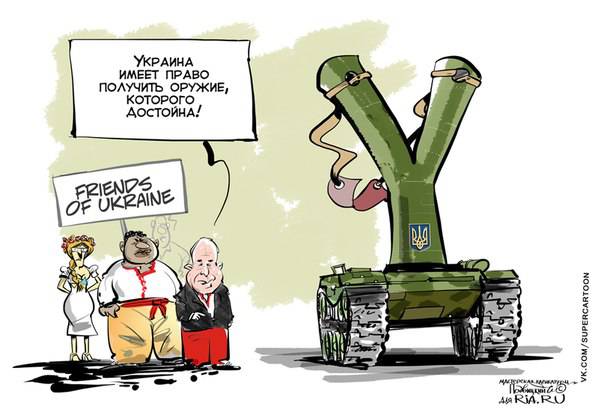 The second week continues the official truce in Ukraine. In accordance with the document signed on September 5, the Ukrainian armed forces and the militia of the self-proclaimed Luhansk and Donetsk people's republics ceased firing and began the exchange of prisoners. However, during the last days, attempts were regularly made to shoot at enemy positions. As a result of one of these attacks, OSCE observers came under fire from Ukrainian artillery. In addition, there are reports that indicate that the current truce is only a break in battle and is unlikely to lead to a real peace.

Recently it turned out that the new Kiev authorities are trying to take a number of measures aimed at restoring the potential of the armed forces. So, before the end of the year, it is supposed to transfer to the troops a certain amount of equipment and weapons, which will have to replace what was lost in the battles. In total, it is planned to purchase and transfer up to 140-145 units of various equipment to the troops: tanksarmored personnel carriers, aircraft, etc. Rifle weapon It is planned to purchase in the amount of several thousand units. Such purchases will cost the Ukrainian Ministry of Defense about 1,3 billion hryvnia (about 100 million US dollars).

The proposed plans for the modernization of the Ukrainian armed forces can indeed lead to a serious improvement in the combat capability of the troops. For example, with the money allocated, you can upgrade and return more than 300 T-64 tanks to service. Even with a reasonable distribution of funding between different areas, it is quite possible to restore the potential of the troops at the level of the beginning of the “anti-terrorist operation”. According to Ukrainian officials and the media, the troops and the National Guard are already receiving upgraded T-64BB-1 tanks.

The command of the armed forces of Ukraine almost does not hide its plans. Immediately after the signing of the armistice agreement, the regrouping of troops began. Various units of the army and the National Guard under change their deployment, as well as receive new weapons and equipment. So, 7 September militias published data obtained their intelligence: in Debaltsevo profit 32 the tank, and to Artemovskaya came 13 tanks, 15 antiaircraft self-propelled guns ZSU-23-4, 7 missile complexes "Point", 6 machines "Grad" and 1 MLRS " Tornado". Such actions of the Ukrainian military can only be interpreted as the preparation of a strike force for breaking through the defense of Novorossia and continuing hostilities.

The Russian Ministry of Foreign Affairs, having learned about the transfer of troops to the area of ​​the city of Debaltseve, expressed its concern. Fears were conveyed to the Ukrainian side, to which she responded with assurances of the absence of any aggressive plans. Kiev claims that it is not going to violate the truce. However, as noted by Russian diplomats, assurances should be verified by practice. Russia is not interested in any of the parties violating the Minsk agreements, and therefore will closely monitor the situation.

The latest events directly indicate that Kiev is preparing a new offensive, the aim of which should be the seizure of new territories and settlements. Blowing technology to the city of Debaltsevo can directly speak about the main direction of impact. However, in the current situation, other localities may also be targeted, which is caused by the main features of the current conflict.

The direction of the strike and the goals of the Ukrainian troops and the National Guard are not completely clear. Nevertheless, there is reason to believe that in terms of casualties, the continuation of the war after the armistice will be the same as the previous battles. Over the past months, the so-called. The anti-terrorist operation killed a large number of civilians, and a large part of the survivors remained without a roof over their heads and was forced to leave their cities. Attempts are being made to restore the housing, but the limited possibilities, the approaching cold and the risk of new shelling do not make it possible to turn the tide.

Significant losses were sustained by the armed formations subordinate to the Kiev authorities. According to various sources, from the beginning of the so-called. ATO army and National Guard lost at least 10-12 thousand people killed and wounded. In addition, some fighters were captured or deserted. As a result, the authorities have to announce new mobilizations and, at the expense of newly-recruited soldiers, replenish the units participating in the battles.

Serious losses are incurred by the park of Ukrainian technology. During the war, at least 200-250 armored vehicles of various types were destroyed. In addition, almost one and a half hundreds of armored vehicles became trophies of the militias and were used against their former owners. Several dozen self-propelled artillery mounts, multiple rocket launcher systems and artillery pieces were destroyed or captured by the militia.

The militia of Novorossia a few months ago was able to create a fairly effective air defense system, because of which, by now, the Ukrainian Air Force has lost more than three dozen aircraft and helicopters. Moreover, after regular losses in mid-July, the ATO headquarters was forced to cease all combat operations for a while aviation.

To compensate for the losses, the aircraft and tank repair plants of Ukraine are actively engaged in the restoration of damaged equipment and vehicles that have been stored. For example, by the end of the year it is supposed to transfer to the troops nearly a hundred and fifty units of various equipment, for which substantial funding will be allocated. In addition, the possibility of the delivery of military equipment by third countries has been discussed for several months already.

Planned purchases of weapons and equipment will undoubtedly affect the state of the armed forces and the National Guard of Ukraine. Nevertheless, the prospects of upgraded and re-equipped units in the battle cause some questions and doubts. For several months of fighting, the militia of Lugansk and Donetsk turned into a real army with experienced fighters and a sufficient amount of equipment. As recent events show, the New Russia army is fully capable of effectively resisting a superior enemy and even seizing the initiative, carrying out offensive and gathering enemy troops into the boilers.

During the war, the militia of Novorossia gained strength and gained extensive experience in conducting military operations. The armed forces and the National Guard of Ukraine during this time suffered losses and demonstrated what the savings on the army and the illiterate management of it could lead to. It is quite possible that by the time the ceasefire ceases, the Ukrainian command will take into account previous mistakes and plan its actions based on the real situation and the experience gained. Nevertheless, the new Kiev authorities had enough time to study the situation and create a suitable strategy, but the losses of people and equipment continue.

Thus, the renewal of battles is guaranteed to lead to new casualties among personnel and equipment, as well as to civilian casualties. At the same time, however, the prospects and the ability of one side or the other to win is not completely clear. The armed forces and the National Guard of Ukraine still have superiority in numbers and technical equipment. Moreover, they have combat aircraft, which is absent from the militias. Nevertheless, despite the smaller number of people and equipment, the militia is able to restrain the enemy and intercept the initiative.

In the present situation, the parties can wage war only on exhaustion, since they are unable to completely suppress the resistance of their adversary. As a result, the continuation of battles in violation of the terms of the truce will lead to an increase in casualties and civilian casualties. A truce and negotiations on the future of Ukraine and Novorossia in this case prove to be the most beneficial solution for both parties to the existing problems, which do not imply new losses.

However, the Ukrainian army continues to pull up units and equipment to some cities in the combat zone. Such steps can only indicate plans to launch an offensive. Ukraine’s chances of ending the war with a complete victory are not too great, and therefore possible attempts to deliver a decisive blow look dubious. In addition, the termination of the truce will affect the reputation of the official Kiev as a reliable partner. It is not yet known exactly how events will develop. However, now there is evidence that one of the parties to the conflict does not intend to choose the least problematic and convenient way out of the situation.