16 September 2014
17
It was to be my second day meeting with the Furniture Maker. I went to Miusinsk, where his company was then with Natasha, in the hope that it would be possible to listen to the story about, without embellishment, the heroic liberation of this city. The first meeting took place a week earlier, at that time a subordinate of the Furniture Engineer, a young sociable guy, with the call sign Nick, drove me to photograph Ukrainian torn to shreds Tanks on the outskirts of Miusinsk. Although I tried to ask Nick a question about the liberation of the city, the answer was clear and military in the right way - I could tell, but suddenly I will say something wrong, if it would be better for the Furniture Worker to do it. And upon our return, the Furniture Worker already needed to leave somewhere, we agreed next time.


Needless to say, I rode in great anticipation, especially since the outskirts of Miusinsk, which I was able to explore with Nick, made a serious impression. The Ukrainian military entrenched there capitals - dugouts and dugouts, the cover of which was made of two layers of logs, well spilled from above and in the middle with a layer of earth, here and there stood, in the literal sense of the word, tanks torn from inside with flipped and turned backwards and backwards. In general, I was waiting.

- Listen, well, I just can not tell you, - said Furnituremaker. Why the Furniture maker? Because I am a furniture maker, I make furniture. Did before that. And stop it, “The Furniture maker-Furniture-maker”, he began his story, at that moment it was a company of Leto ... We were in Vakhrushevo. We drove there at night, settled in the afternoon, and in the evening the First arrived (I. I. Strelkov) and said - we must take Miusinsk.

The furniture maker, without knowing the disposition of the enemy, having no information at all, with a group of intelligence, is moving in the direction of Miusinsky on the field. For n.p. Knyaginevka in the car runs out of gas (by the way about the financing of the militia, which is called UkroSMI), time - 3 o'clock in the morning, and by agreement, an hour later the main part of the company should advance to the area of ​​Miusinsk. Not far from the place where the reconnaissance vehicle got up, there was a digging tank (this is how small private coal mining sites are called in Donbas), a person from this digging unit helps the 5 guys with liters of gasoline.

“We drive first to Krasny Luch, here the huts are all broken, these bastards (APU) were shooting along this road (pointing to the map) ... Of our own, there was no one there at all, but the picture is terrible. We call in Miusinsk, the picture is exactly the same. We call on this road, get enough sleep here (this is already in Miusinsk, which is teeming with Ukrainian punishers) by the forces of one intelligence, who arrived at one NIVe! It was only dawn, we do not know where they are, but we know that in Miusinsk. Well, the guys are just like that ... Kum, for example, he danced in front of them in Ilovaisk, danced in front of snipers, so that they shot him, and our UTES so that later he could work on them ... as if so, all of our fools ( smiles), there are no normal people, everyone is normal at home. Carefully they began to advance in Miusinsk, they found Sanya - local, they started talking, showing his hands, Natsik caught him ... Right here his hands (showing from his elbow and above) were simply cut with knives ... and they also beat his ribs. We are fixed on this part of Miusinsk, and our main forces are coming. Our company and Motorola company came in. (The reinforced positions of the Ukrainian Armed Forces were located on the other side of Miusinsk, a lot of equipment was stationed in the residential sector, so it was impossible to fire at it). The day is a fierce battle, shootout, and before that I put soot on the heap (artificial elevation formed as a result of coal mining), near the Red Ray, eyes. Slagheap turned out to be a very advantageous height relative to the positions of the Ukrainian troops. Our mortar gunners arrive, Ash, I call myself a spotter ... when I have to, I will do everything I need to beat these fascists (it should be noted that the Furniture maker practically does not use foul language, and in rare cases, cursing, he immediately stops and apologizes). They (ukry) are behind the hill, our mortars on the other side, I go out on the hill, it turns out that ukry can see me, but I don’t care about it and I begin to indicate the direction of landing where the tanks have stopped (here he gets up and shows how walked along the territory swept by ukrami and, like a traffic controller, the movement corrected the mortar fire). First, 200 meters were thrown, then they didn’t reach, but this is normal, sighting ... in short, we covered this landing (it was there that I photographed broken tanks a week before this story), so the first day ended.

Second day. In the morning ukry begin to move. And our Ashes went to get ammunition ... And Snezhnian was still helping, D-30s were still knocking down, working normally, the hits were good. We have an LNG-9, and we also have a Diesel, the first time he fired with the LNG-9 at Yampol, you believe, no, his first BMD he tumbled so that the tower lay on the floor ... the metal floated ... Then the Diesel fired for the first time with LNG-9, they have exploded ammunition there. I had previously asked the Tsar, that was when he was still the brigade commander, give us shells for LNG-9, give me, I already have the calculation! They give us LNG. In short, the second day. They come in from the morning from the school and begin to surround our boys, and ours at the post office were here ... On the second day, the mortar men had only 20 mines left, I put it here on the LNG waste. It turns out, on the one hand, Motorola boys from AGSa are crap, we were there too, Academician was also there in the video, filmed. While we are putting out LNG-9, they begin to surround, and the Diesel starts to peel, on the other hand, the tank is leaving for the position - ukry see that they are firing from the waste, because from LNG-9 the strong dust rises from the shot, our boys, that with LNG fire, black ... the miners are resting! For 1,5 hours of diesel with the boys "lawn" shells are thrown over the column, which begins to surround us! Well, can you imagine, more than 150 high-explosive fragmentation flew into them in an hour and a half? Ukry understand that they ass, and the infantry, well, where, with such shelling ... the column begins to hastily leave Miusinsk! We see them leaving, clearly we see them, but by this time we don’t have anything at all on mortars ... LNG-9 overheated to the point that the last projectile they charge fires by itself, I don’t understand our guys they did not fall under this (the LNG-9 is the so-called “recoilless cannon,” an anti-tank grenade launcher, which, when fired, produces the same jet from behind as on an RPG grenade launcher, so it can seriously hurt) In general, we were annoyed to see how before our eyes a convoy of 53 (!) Units of armored vehicles were leaving us, and by that time we were stupidly nothing to shoot at them ... we would have left them all here.

Diesel and the boys who were with him ... these are the people who still need to search! They were there, not just standing on the heap ... and they shot at them with cassettes and from tanks ... they would run off to the waste heaps, and then they would point them back at that and bang! Bah!

Directly in Miusinsk, Acacia, a tank, a tank just with the batteries running down, 4 infantry fighting vehicles were captured - one of which was donated to Bachi’s company, now Biker (pleased Natasha tells, one BMP fry Toha - watch the video “It was yours, it’s ours” on my YouTube channel), killed BMPh, tanks ... in total, the order of 30 units!

To sum up - the release of Miusinsk was made by the militia as part of the order of 100 man, 1 BTR, which jammed the gun, and it was useless, there was only LNG-9, AGSy, machine guns, RPG-7 and everything else ... Not counting how many I packed technicians, another 53 unit, I add, gone - not gone! It turned out, ran away! Sykuny! - adds Furniture maker. It was on the armor they were still people! If according to the most conservative estimates, there were a lot of them in 5, or even more in all 10! Our guys are almost one and a half - two people accounted for one unit of their equipment!
They do not want to fight. They are scared! Where are we going to retreat? We are on our own land! We do not want to fight, we just want to live on our land. We want to go home! I did furniture all my life, why do I need this war ?! I want to wife, to son.

In the process of the Furniture-maker's story, the same Leto entered the room, the company commander, now the Furniture-maker company, he also supported his comrade - I have to go to school on September 10, where will she go? How?

Furniture maker added:
“Either we die, or we win and calmly return home, we have no other choice.” Some refugees, strangers, we will never be! I'm not going to run, my grandfather died with a shard from the second world war in his leg ... something like that ...

When attacking Miusinsk forward went 2 reconnaissance. offices ahead, in gardens, in huts, the guys quietly came out at the crossroads where the BMP stood, the tank and the dill personnel, among one group of intelligence officers there were two guys who came from the Czech Republic to fight with the fascist regime on the side of Novorossia ... the guys fought as real heroes and, being in an extremely difficult situation, did not retreat. When the fascist're coming out were driven out of Miusinsk, the militiamen found the bodies of Czechoslovakian guys with traces of an APC that had moved them ... it is noteworthy that the “Ukrainian heroes” were driving over the bodies of the dead men already. The furniture maker says that when peace comes, a monument will be erected at the place of death of the heroes ...

Concluding my story, I want to say that when, at the very end of the conversation, I asked permission from the Furniture maker and Leto to take a picture of them, the guys said it was no good. They are not fighting for glory, and they don’t want to post a photo, they just want to go home ... And for some reason I remembered the hero of the film Ridley Scott, the Gladiator, perfectly embodied on the screen by Russell Crow ... For some reason they are Donbass guys are heroes who just want to go home. 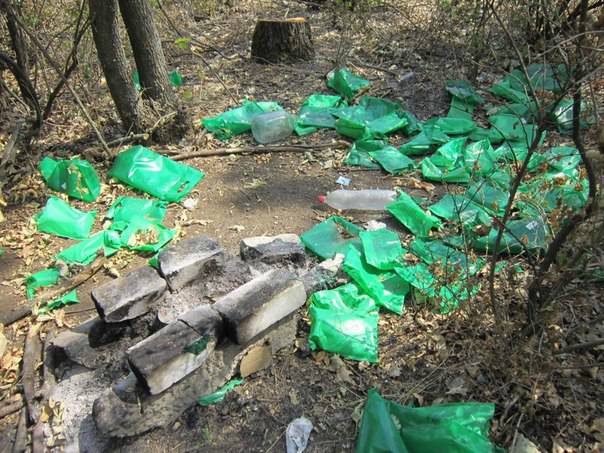 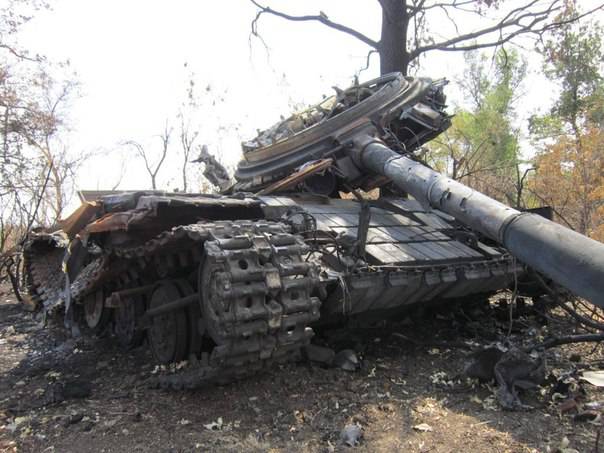 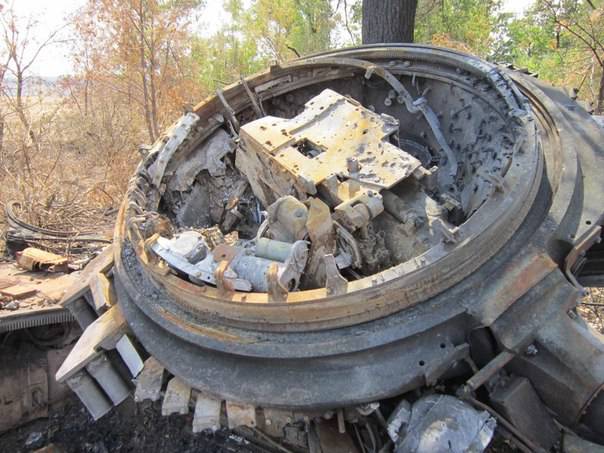 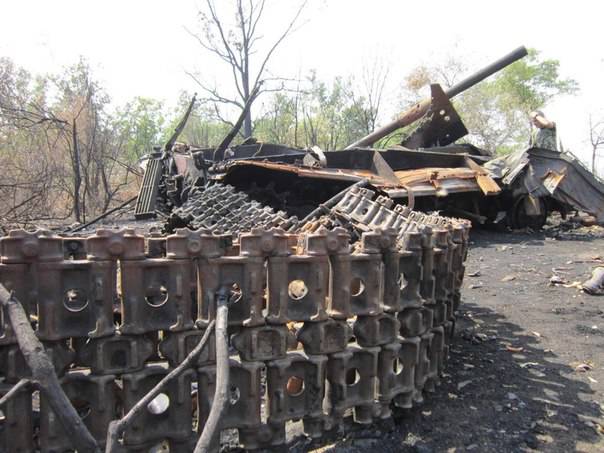 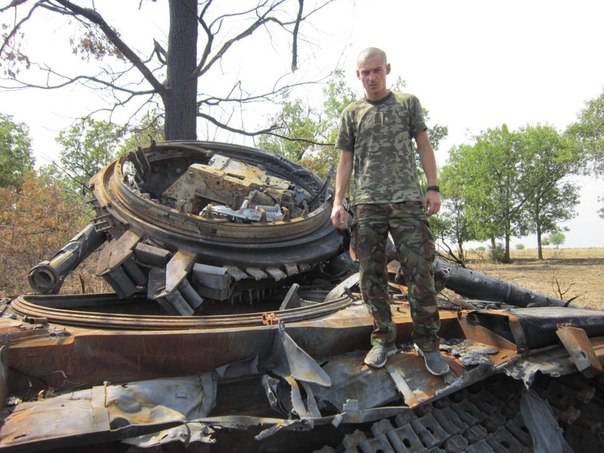