16 September 2014
14
In the United States, work on the creation of a high-speed combat boat called the “Ghost” (English “ghost”) is in full swing. The boat is created by a small company Juliet Marine Systems and can become a real thunderstorm of pirates. At least this is currently its main purpose. The machine is created to fight the pirates of the XXI century, which in recent years has intensified its activities in some regions of the world. The boat, which has already been compared with both the fighter and the attack helicopter, has received powerful engines and can carry a rather impressive arsenal of weapons. Another advantage of the “Ghost” boat is a very high speed of movement on water, significantly exceeding the speed of movement of ships and boats of pirates.

High-speed boat Ghost was originally designed for rapid movement in areas of coastal shoals, so this ship is ideal for traveling in shallow water along the coast. It can be used for missions to patrol and escort ships in sea hot spots of the planet like the Strait of Hormuz. It is worth noting that the company Juliet Marine Systems has been studying the issue of countering sea attacks for several years already; work on the project began as early as 2008. The company has provided its boat with a set of characteristics in the form of maneuverability, speed, and also attacking potential, which allow the ship to withstand any threat posed by pirates.

At present, the exact technical characteristics of the boat are still being kept secret. It is known that gas turbine engines were installed on the boat, as well as supercavitation technology was implemented. This technology allows air cavities to be formed under the Ghost boat, which reduce water resistance and allow the water fighter to move at high speed. In addition, the boat is able to lift itself above the water with the help of pontoons, which allows it to maneuver even on strong shoals that are located near the coast. 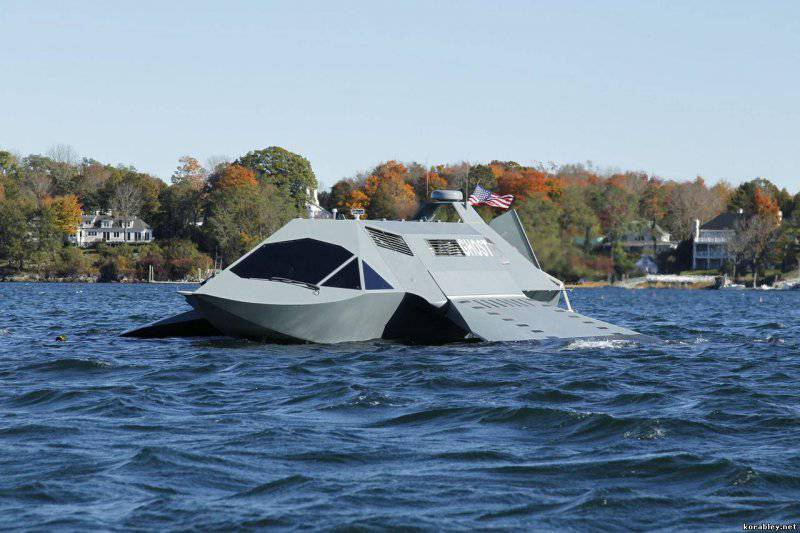 In this case, the Ghost boat will receive weapons that are worthy of respect. Juliet Marine recently posted an announcement on what it’s looking for armory a company that can fill in the hidden weapon compartment on the boat located at the bottom of the hull. The boat has a sufficiently high carrying capacity - about several thousand kilograms, which allows you to install a wide range of weapons on board. Moreover, they can be placed both in the hull and on the outer parts of the boat. For example, machine guns of the Gatling system, as well as systems for launching long-range torpedoes of the Mark 48 class, may appear on it. It is reported that the carrying capacity of the boat will allow even experimental weapons to be installed, for example, laser guns. At the same time, the internal weapons compartment can be easily converted into an additional fuel tank, which will help increase the range of a high-speed boat or will be used to refuel other vessels at sea.

A press release published by the manufacturer stated that the technologies in the Ghost program are scalable. This means that, if necessary, they can be used in the development of other surface or even underwater platforms, including those managed remotely. Juliet Marine Systems has already begun negotiations with an unnamed foreign company to jointly develop a Corvette-class ship with a maximum length of about 45 meters.

The company believes that the technology implemented in the Ghost boat will allow the Navy to covertly carry out operations in international waters, as well as gain an overwhelming advantage over ordinary ships. On the navy the boat has already been compared to an attack helicopter. A super-cavitation boat, while remaining invisible to enemy radars and its surveillance systems, will be able to land on the shore and support it with fire. The nominal crew of the boat is 3 people, it is driven by several gas turbine engines. 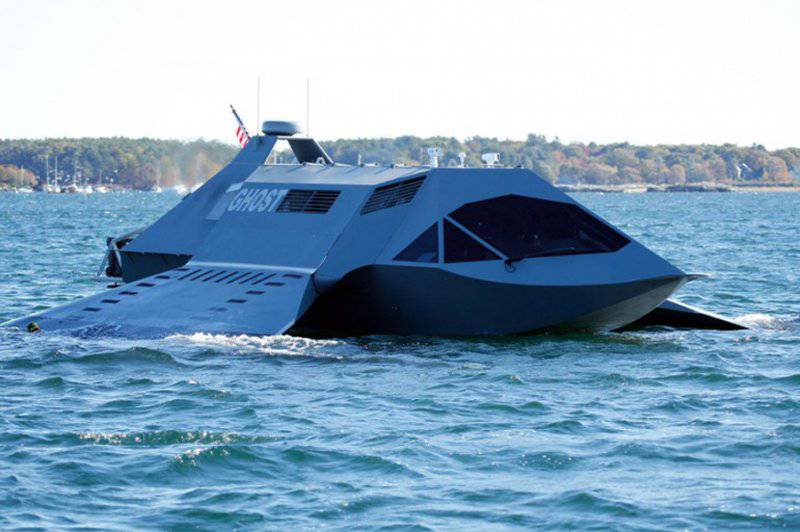 In the current version, the boat is mostly “sharpened” to ensure the safety and protection of other ships of the fleet. In addition, he can fight pirates, which would allow the US Navy to significantly reduce the cost of this item. According to experts, annually about 1,5 billion dollars are spent on fighting piracy. At the same time, Juliet Marine Systems believes that their platform and Ghost project technologies will minimize the need for the US fleet for coastal warships (LCS) and will also lead to the transformation of their combat missions.

It is also reported that in the future, Ghost technology will be used in the construction of ships and will be able to provide significant fuel savings. It is worth noting that the principle of supercavitation has already been applied in the creation of the well-known Soviet anti-submarine torpedoes BA-111 "Squall", as well as the German "Barracuda". The details of this technology are kept secret by the Americans. One can only assume that each of the underwater hulls of the new super-speedboat during acceleration will be covered by a large air bubble from the nose and almost to the very tail. According to JMS, the artificial gaseous environment under water reduces the friction of the hull immediately 900 times.

According to experts, Ghost is not the first attempt to make the US Navy happy with a fairly fast, inconspicuous device. However, from the construction of prototypes to the creation of successful operating weapon systems is a very long way. As an example, we can recall the fate that befell the draft 25-meter vessel M80 Stiletto. This ship was supposed to accelerate on smooth water faster than 90 km / h, as well as carry on board up to 15 people with associated weapons and equipment. Also, this ship was equipped with a special 11-meter boat, which was placed in its mini-dock. 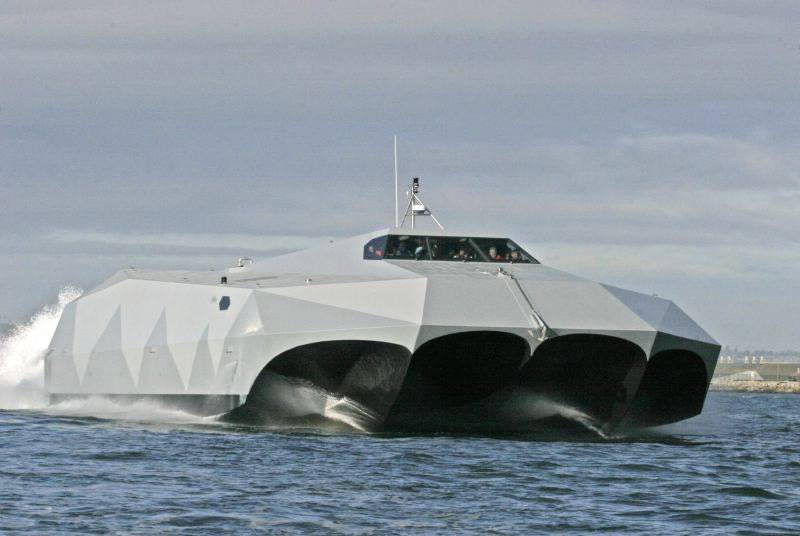 However, this masterpiece of technical thought failed to manifest itself in all its glory, causing a large number of questions among specialists. In 2008, as part of a real-life hunt for drug dealerships off the coast of Florida, M80 Stiletto rescued in a natural way. Strong sea disturbances did not allow him to use his speed advantage, and the radar installed on him constantly lost illegal vessels. In addition, there were problems in the work of the closed communication system used for negotiations with other warships.

So far, Juliet Marine has not received official contracts from the US Department of Defense on Ghost boats. This means that this speedboat has not yet been qualified as a combat vehicle. Theoretically, this boat can be purchased by anyone, simply by placing an order. At the same time, the boat will not receive the equipment necessary for the installation of weapons systems, as well as the systems themselves. Arguing about entering the world market, the company notes that Ghost can be in demand in a number of areas. For example, he may not be engaged in catching pirates, and work high-speed coastal taxis.