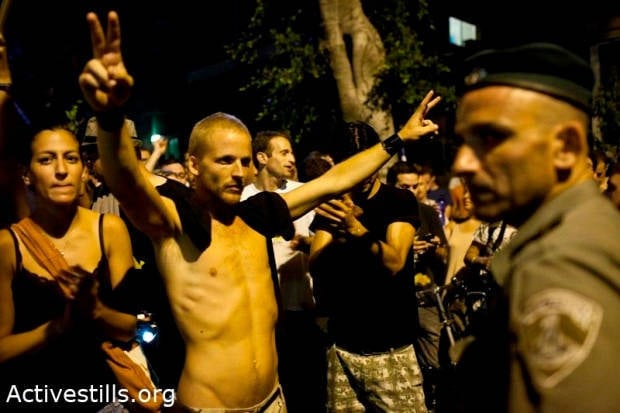 Tel Aviv police arrested an 42 activist, which according to + 972 Magazine is an extremely rare, if not unprecedented, occurrence.

Protests are part of a wider movement that began as an opposition to rising house prices, and continues to revolve around this problem, but covers other issues of social justice.

These protests are called “The most serious challenge for Netyanahu in domestic politics, and show that the progressive leftists in Israel have influence.

Perhaps in Israel, change is coming.

Noam Sheisaf provides a good description of how the protests began to unfold last week:

This happened almost overnight: walking last week on Friday morning near Habim Square in the center of Tel Aviv, I saw a few tents, where there were only a few dozen people who responded to the Internet call against rising rental prices for housing. On Saturday evening, the entire Rothschild Boulevard was filled with tents. A couple of days later, tent protests became the dominant theme in news reports.

Housing Minister Ariel Attias said that the protesters are simply capricious children who refuse to leave the popular center of the country, but by Tuesday the tents were already in Jerusalem, in Beer Sheva in southern Israel and Kiryat Shmona in the north, near the Lebanese border. On Wednesday, protesters tried to break into empty apartments in Tel Aviv and Jerusalem, tents on Rothschild Boulevard stretched for several blocks, and marches and rallies were scheduled for the weekend. Friday newspapers wrote, Benjamin Netanyahu sees tent protests as the greatest threat to his ruling coalition.

These protests, which began as anger against rental price increases in cities across the country, provoked an even more violent reaction after the response of the Netanyahu government, which was initially filled with hostile rhetoric and claims that it was part of structures like the New Israel Fund. The initial rhetoric, when statements were heard that it was no more than a part of the Left Zionists' political plan, caused even more violent anger and indignation.

Such a reaction from the Netanyahu government contributed to the proliferation of protests that shifted from rising rental prices to a range of social legal issues: women's rights, trade union rights and educational reform and other things, with a general “revolution” chant that could be heard last night. 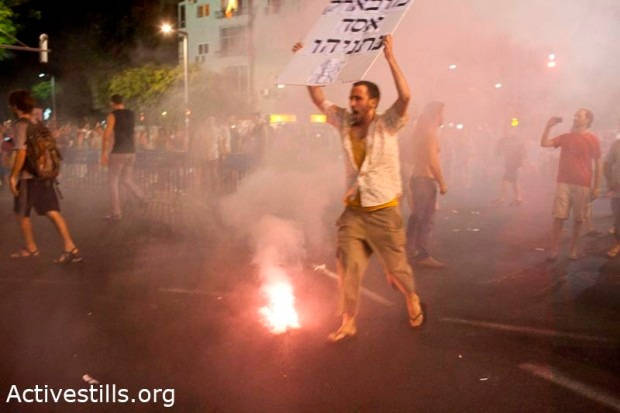 In the meantime, protests are growing, and everything indicates that they will continue to grow and spread as the Israeli progressive leftists are included. 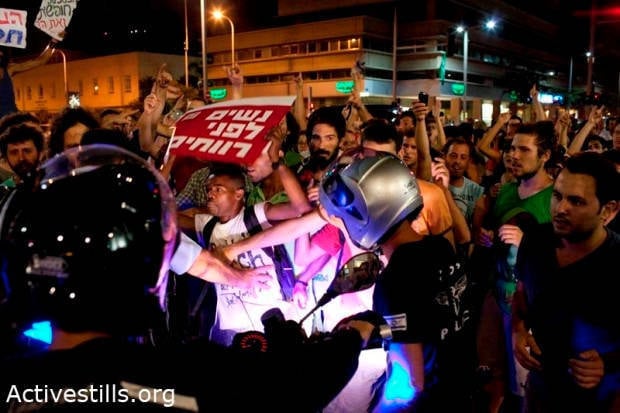 The first time, like its neighbors, last night, Israel “bucked”. Yes, the genesis of the Israeli protests is probably different, but all these riots share a similar trend: dissatisfaction with the current regimes. 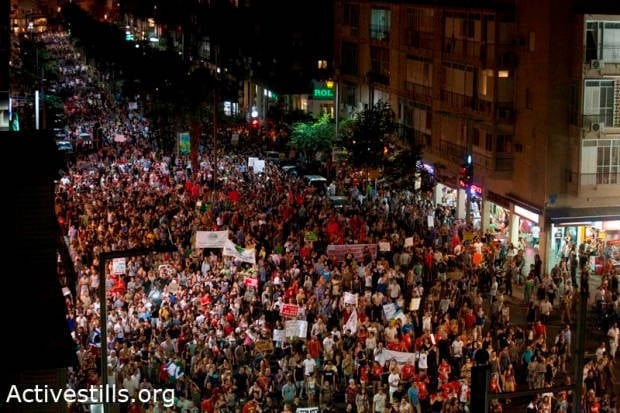 The protesters reached the residence of Prime Minister Benjamin Netanyahu, and tried to block the neighboring streets, calling for Netanyahu to resign. Then they were scattered by the police, and continued on to the Knesset.

Meanwhile, tent camps continue to appear across the country, showing that the crisis for the ruling class of Israel seems only to be growing.

Here are protesters in front of the Knesset, chanting in Jewish "We demand social justice."

In a very interesting moment called “Israeli protests against housing prices have no connection with the occupation” Aziz Abu-Sara writes:

This argument no longer holds water. On Saturday, tens of thousands of people protested in Tel Aviv against housing problems. The main streets of the city turned into tent cities. Doctors and students are protesting against the conditions of their work, as food prices and gasoline are rising sharply. The salaries of teachers are reduced every year. The social democratic ideals on which Israel was created disappear. The rich get richer, and the poor remain poor.

It amazes me that many Israelis are unable to see the connection between the ongoing occupation and the internal problems facing Israel today; Israel appeared in the West Bank, but could not provide its citizens with housing within its territory. The current Israeli government is focused on improving the standard of living in the settlements (meaning settlements in the occupied Palestinian territories; approx. Mixednews), but they cannot provide the same for the whole country.

We are in Yandex Zen
Damascus will deliver a massive missile attack on Tel Aviv
4 comments
Information
Dear reader, to leave comments on the publication, you must to register.