Developed a recovery plan for the Center. Khrunichev 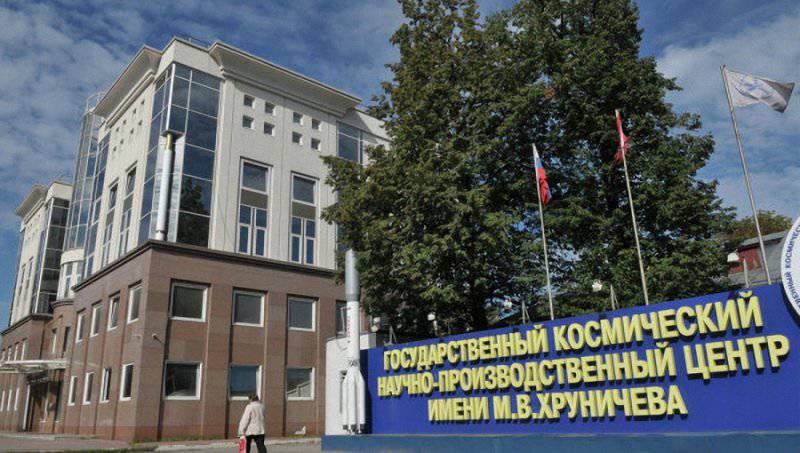 In early August, the management of the State Space Research and Production Center (GKNPT) them. Mv Khrunichev. The purpose of the appointment of new managers was the restoration of the enterprise, caused by existing problems. New high-ranking officials should solve the existing problems and restore the potential of the enterprise. Last week, a plan for the financial recovery of the Center was presented.

Last Thursday, September 11, the new general director of GKNPTs them. Andrei Kalinovsky Khrunicheva presented to the leadership of the space industry a developed action program aimed at restoring the enterprise. Development Plan of the Center. Khrunicheva was developed in accordance with the April instruction of Prime Minister Dmitry Medvedev. The proposed recovery program was reviewed and approved by the supervisory board of the United Rocket and Space Corporation (URCC). In the near future, a package of documents will be sent for consideration to related departments and the Federal Space Agency. After obtaining all necessary permits, the program must be approved by the government.

The proposed program for restoring the potential of GKNPTs to them. Khrunicheva is important for the domestic space industry, since this enterprise is one of its main “locomotives”. The head of the ORCC, Igor Komarov, noted that the Center’s financial recovery plan will be adopted in less than a month, as the company needs urgent help. In his opinion, the situation is "not easy, but not hopeless." Thus, the implementation of measures developed under the new plan will begin as soon as possible.

Pavel Popov, deputy general director of ORKK, told the press about the current state of the GKNPTs them. Khrunichev, and also touched on the causes of the observed phenomena. In his opinion, the reason for the current deplorable situation of the enterprise is the wrong organization of production. Because of this, since 2007, the Center has been constantly losing money. The accumulated loss from operating activities reached 11,9 billion rubles, and debts to suppliers amount to about 14,7 billion rubles. In addition, there are huge debts to banks. According to P. Popov, the Center. Khrunichev, suffering losses, did not declare them. Corresponding statements appeared only at the end of last year, when the situation became too difficult.

The press provides other details of the provisions of the GKNPTs them. Khrunichev. According to Vzglyad, the company has a negative profit forecast for this year: -27%. Labor productivity is 30% below the industry average. The average salary of employees - 37 thousand rubles. The load of the enterprise does not exceed 40%, equipment depreciation reached 60%. Thus, the state of the Center is constantly deteriorating and requires urgent action.

Additional 10 billions will be invested by the Center. Khrunichev independently. From 2016 to 2025, it is planned to conclude several long-term contracts for the construction of Proton and Angara launch vehicles of several modifications, as well as Briz-M booster blocks. Taking into account the company's own investments, investments in the rehabilitation program should exceed 56 billion rubles.

In addition to investing finances, it is planned to carry out a number of organizational and production transformations. Thus, it is planned to organize a full cycle of production of new Angara launch vehicles at the Omsk POolyt plant. The Proton missiles and the upper stages, in turn, will be produced only in Moscow, without the participation of Omsk specialists. In addition, it is necessary to optimize the production areas of the Center in Moscow and Omsk, which will improve their performance. Due to similar transformations and production concentration at two sites, labor productivity will increase almost three times by 2018.

Currently, part of the Moscow production capacity is not used. More than half the area of ​​the Moscow plant of the Center. Khrunichev to 2018 year is planned to transfer to the jurisdiction of state banks. It is assumed that such a move will get rid of unused areas and thus get rid of the costs of their maintenance, as well as get money for the development of other facilities. Currently GKNPTs them. Khrunichev has shops with a total area of ​​341,3 thousand square meters. By the year 2018, this parameter will decrease to 123,1 thousand square meters. m

Financial problems force the company to abandon the production of part of the products. GKNPTs them. Khrunichev will continue to build launch vehicles, but he will refuse to manufacture part of the spacecraft and modules for the ISS. Like some other measures, such steps are designed to streamline the production process.

In addition to production sites, changes will be made to the Salyut design bureau. In the near future it is planned to translate all the documentation of this organization into digital format. Planned transition to modern computing equipment of domestic production, designed to accelerate the work and increase their efficiency. In addition, Salut’s engineers will soon move to a new building. All proposed measures that will be applied to the design office will help to optimize the process of developing new projects, as well as simplify the testing and other work.

New CEO GKNPTs them. Khrunicheva A. Kalinowski believes that the proposed plan will help the company to get out of the crisis situation and return the lost positions. In the future, the renewal and rehabilitation of the Center will allow it to once again become one of the leading rocket and space enterprises in the world. Launch vehicles built by the Center. Khrunichev, used to launch Russian and foreign spacecraft, and similar cooperation with other countries should continue.

The main type of products GKNPTs them. Khrunichev are “Proton” launch vehicles that are of interest to both domestic and foreign organizations. Nevertheless, the Russian rockets had a competitor: the launch vehicle Falcon 9 of the American company SpaceX. According to the Deputy Director General of ORKK P. Popov, in the future, Proton missiles will be able to compete with American development at a price. If SpaceX is able to create a launch vehicle with a launch cost of about 55 million dollars capable of outputting a payload to a geo-transitional orbit, it will become a leader in space launches of spacecraft weighing up to 4,5 tons. However, ORKK and GKNPTs them. Khrunichev with the existing "Protons" will be able to compete with the Falcon 9, albeit with some reservations.

Certain risks for the Russian space industry are borne by the US project of the Falcon Heavy launch vehicle with the stated launch price of 81 million dollars. Due to such missiles, according to P. Popov, a new price format may appear on the market. However, in this case, the Russian space industry will be able to enter the market with profitable offers, but this will require investments in the development of new technology.

The ability of Russian launch vehicles to compete with their foreign counterparts is cause for optimism. However, to restore positions in the international launch market and expand its influence to the Russian space industry, it is necessary to restore the potential of a number of leading enterprises. GKNPTs them. Mv Khrunicheva is currently in an extremely difficult situation and needs urgent financial rehabilitation. The proposed program for the rescue and development of the enterprise should be adopted as soon as possible. Its first results will be noticeable after a few years.