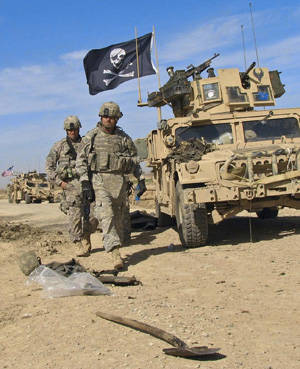 The US Senate Commission, established more than three years ago and whose function was to count the funds spent by the government for conducting military campaigns abroad, concluded that the $ 30 billion spent on restoring Afghanistan and Iraq was wasted. As for Afghanistan in particular, there is an acute problem of national security as never before. The Taliban for those 10 years, when a powerful American military machine fought against them, did not become weaker and the number of their army did not decrease.


Coalition forces today are taking the first steps in transferring full power directly to the Afghans themselves. Last week, the solemn ceremony of the transfer of authority took place in the province of Bamian, just a few days ago, the local Afghan military and police detachments assumed responsibility for the security in the cities of Herat and Mazar-i-Sharif. The coalition forces still remain there, but they will not obey the command of NATO, but the Afghan authorities. Naturally, only the calmest regions are selected, where the influence of the Taliban is usually minimal. The ceremony brings together big bosses, generals and governors. And yet the very preparation of the procedure is always kept secret, and the celebrations are heavily guarded. It was previously announced that by 2014, the military operation conducted by the international coalition forces would be fully completed.

"The United States, in terms of its domestic policy, has achieved its goal of eliminating Usami Bin Laden. At the same time, 10 years have passed, the anti-war campaign in America’s modern public consciousness is increasing. This is the main reason for the announcement of the withdrawal of troops,” explains studying modern-day Afghanistan. “Unfortunately, in ten years, Western troops have not been able to eliminate the main threats. In particular, direct terror against key politicians and those who could really to hinder the radicalization of the region or who play a pivotal role in negotiations with the irreconcilable Taliban. "

They are killed deliberately. The killings began as soon as the United States announced its intention to withdraw its army units. They shoot politicians who can prevent extremists from strengthening their positions. The closest associate of Afghan President Hamid Karzai Jan Mohhamad Khan was shot in his own house during a dinner attended by numerous guests, among whom was one of the deputies of parliament. Shortly before that, the stepbrother of the head of the country, Ahmed Wali Karzai, was shot dead. His killer was the personal security chief, who then shot himself. During the funeral of Wali Karzai in a mosque, a suicide bomber blew himself up and all those who came to spend his last journey. The Taliban are revealing, arrogant, cynical.

Speaking of victory in a ten-year war, American generals, first of all, pay attention to something else. Former commander of the combined US and NATO forces, David Petraeus, said that there were fewer attacks on Western coalition forces by 20. And this is a trend. He is confident that the troops need to withdraw. Pessimistic analysts predict that the withdrawal of Western troops will lead to the fact that either the Taliban will return to power or the country will split. But the US is obviously guided by a different logic. In addition, it is necessary to take into account that the war in Afghanistan costs US taxpayers $ 8,5 million per day.

"We are not trying to idealize this operation. In many ways, Americans fail. They make amazing mistakes that even the USSR did not allow at one time. Because NATO members are exclusively engaged in suppressing Taliban’s armed resistance, not introducing alternatives to the local population," explains the chairman of the State Duma Committee in international affairs, Konstantin Kosachev. - An ordinary Afghan today has practically no alternative: either go to the police, putting himself at risk of being killed by the Taliban, or go to the side Well, the Taliban and fight for the world caliphate, or the third option to grow opium poppy, which, as a rule, the majority chooses. According to some data, today, the amount of heroin produced in Afghanistan provides the need of all mankind for more than a hundred years. "

The real possibility of the final transformation of a depleted Afghanistan by incessant wars into a heroin-producing fundamentalist underbelly of the Russian Federation is a dangerous prospect. But even with a military effort, the problem cannot be solved. Afghanistan won, starting with the Ottoman Empire - failed. Twice the British attempted to conquer the Afghan people without success. USSR left Afghanistan ingloriously. Now the alliance of NATO and the United States, speaking of victory, is in reality defeated.
Ctrl Enter

We are in Yandex Zen
"IG" in Afghanistan. Will the war come to Central Asia?
Afghanistan: progress against regress?
13 comments
Information
Dear reader, to leave comments on the publication, you must to register.