Bashkir army of the Russian Empire 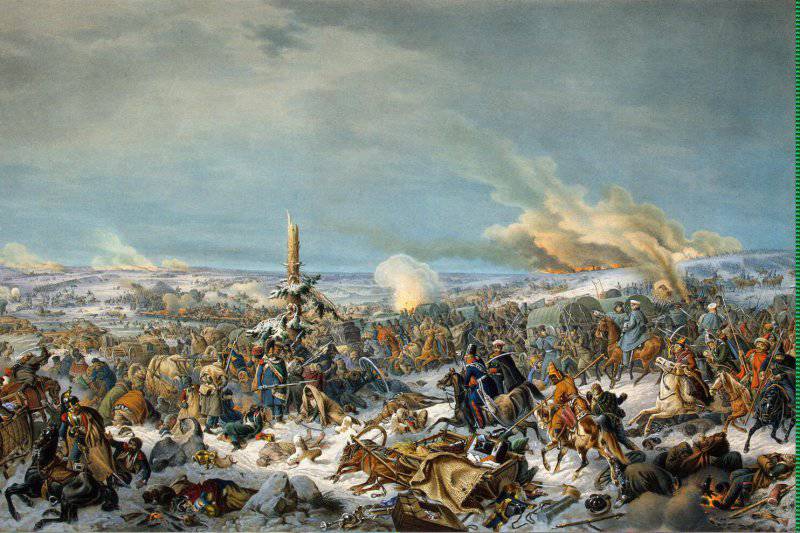 P. Hess. Crossing the Berezina. On the right side of the picture are Bashkir horsemen pursuing the retreating French

Tsar Ivan IV, having accepted the Bashkirs in Russian citizenship, issued them in 1557 a letter of possession of all their land for all eternity according to their national rights and customs, and bestowed tribute, which he ordered to bring in with honey, animal skins and money. Many Bashkirs were freed from the yasak, but they were obliged to do military service, and therefore they became known as "Tarkhans." [1]

Tarkhans were not serving people in the strict sense of the word: like all yasak and pseudo-tarkhans, tarkhans lived on the same lands with them, doing the same thing as those who were subject to the same authorities, differing from them did not pay yasaka. Tarkhanism was, like the nobility, personal and hereditary. Many noble families came out of the Tarkhans. Thus, the Bashkir princely clans Aptulov, Devletshina, Kulyukov, Turumbetev and others used tarkhanism before. During the campaigns, the Tarkhans made up special detachments in the army; they were joined by the militia, which was recruited from the yasak bashkirians. 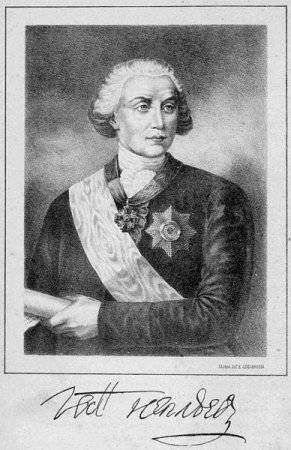 According to the "Decree of the name given to infantry general Baron Igelstromu April 10 1798, the» [4], of Bashkirs Vyatka, Orenburg, Perm, Samara and Ufa provinces was formed by irregular troops, divided into 12 cantons, which in turn are subdivided into compartments and teams. The cantons were ruled by officials from the Bashkirs, who in their rank were approved by the corps commander. Many of them served to headquarters. At the head of the departments and volosts were the yurt elders, who belonged to class and Cossack officials. In these ranks the Bashkirs were made by the corps commander. All these ranks came out of the Bashkirs and lived among the people. [5]

The titled Decree contained the “Order given to the Bashkir and Meshcheryak canton commanders”, which said: “... Confirm to all Yurt Elders most strictly, so that the people commanding the service were equipped not only in turns, but were equipped weapons, clothes, horses and food from the whole society. And therefore from Bashkir, excluding only Mull, who by their spiritual title at mosques, they send their service, and personally the Canton Chief, his assistant and the Yurt Starshin, the rest are all, both the mosque servants and the children of the canton Chief and the Yurt Chiefs, and in general those remaining in the houses and the Bashkirs who were seconded to the service, are obliged, by decomposing the sum required for the whole time they were sent to the service, in the state of each ... ”[6].

The whole army consisted under the main command of the commander of the separate Orenburg corps, headquartered in Orenburg, where it had a troop rule and office. Total Bashkirs were supposed to exhibit 5413 warriors.

For the investigative actions in case of two, and sometimes even in one canton, there were solicitors (assistants to the prosecutor and defenders of public interests), mostly from civilian officials. Under some cantons there were also special trustees of staff officers.

The main duty of the Bashkir army was to maintain cordons along the Orenburg line. During the whole time they were on this urgent service, the Bashkirs kept themselves on their koshta, receiving from the treasury a salary of only one ruble per banknote per person per month. In addition, as needed, the Bashkir troops formed 5-centric regiments on the rights of the Cossacks, who, before coming out of the assembly point for 100 versts, kept themselves on their own clothes, and then procured from the treasury for the hussar position.

In World War 1812, the 20 Bashkir regiments were formed. The uniform uniform of the Bashkirs originally wore a national character and consisted mainly of a kaftan of blue or white cloth, the same trousers with red piping and a pointed white felt hat, but in 1850 for them, a uniform was introduced like the Cossacks. 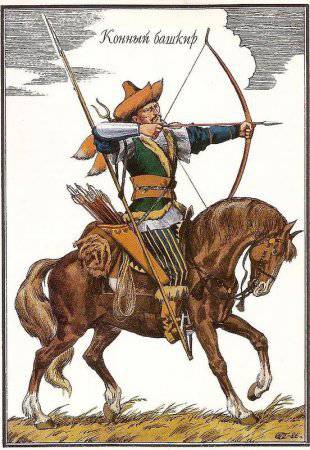 The Bashkir armament consisted of a pair of pistols, rifles, spikes, sabers, bows (sided) and a quiver of arrows, which they skillfully fired at a long distance at the target and, moreover, with such force that the arrow on the 15 fathoms (approx. 30 m) could pierce through not only man, but also a horse. The French, who had experienced the wars with Russia, especially in 1812, called the Bashkirs "northern cupids", the destructive effect of these arrows. In 1814, the Bashkirs, along with the Cossacks, watered their horses in the Seine. [7]

Soon the Bashkirian army was also joined by the mecheryaki, who previously constituted a special army, divided into four cantons. In 1836, a temporary headquarters of the Bashkir-Meshcheryaksky army was assigned, which was entrusted to a special commander. Service outfit has been reduced by about a third.

Despite the fact that the abolition of the Bashkir-Meshcheryaksky army was already predetermined, some of its hundreds took part in 1839 in Khiva and in 1853 in Ak-Mechetskaya expeditions, and in 1853 – 1856. Two Bashkir regiments were sent to the shores of the Gulf of Finland to keep cordons from attacking the Anglo-French landing force. [9]

In 1863, the warriors who made up the Bashkir army were equalized in civil rights with the villagers. [11]