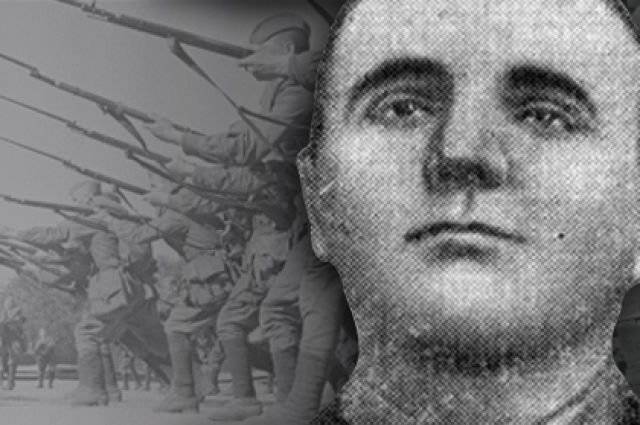 An enraged commando single-handedly crushes dozens of armed opponents, turning them into erratic flight - a similar plot is familiar to most in Hollywood action films such as “Commando” or “Rambo”.

Yevgeny Blinov (left) and Evdokim Reutsky were not worried about themselves, but about their families.
In reality, what is happening on the screen is hard to believe. And, nevertheless, something like this actually took place. Moreover, reality surpasses the invention of Hollywood scriptwriters.

True, the main character storiesthat happened in July 1941, was not a "fur seal" or "green beret", but a simple Ukrainian peasant.

Dmitry Ovcharenko, a native of the village of Ovcharovo in the Kharkiv region, was drafted into the army before the war, for military service. There was a recruit to the most ordinary peasant guy, not a hurt silushka and an article, but only with five classes of education.

The son of a rural carpenter who was born in 1919, Mitya Ovcharenko from a young age more than comprehended peasant rather than school science — he learned to care for cattle, to harvest hay, to chop wood, and, of course, to master his father’s carpentry science.

I was counting on 21-year-old Dmitry to serve in the army, to return to my own collective farm, to marry - in a word, the usual dreams of a simple rural guy. 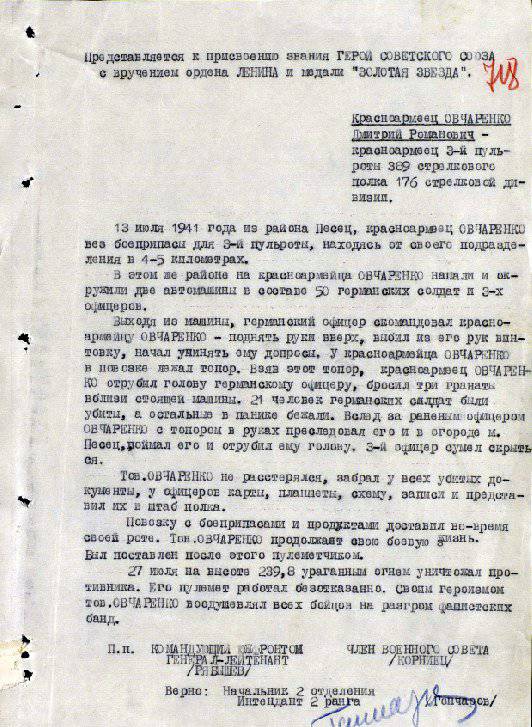 Presentation of the title of Hero of the Soviet Union to Dmitry Ovcharenko. Photo: Commons.wikimedia.org

But in June, the 1941 of the war broke out, and the 3 th machine gun company of the 389 rifle regiment of the 176 th rifle division didn’t worry about returning to the “citizen” to the Red Army man of the XNUMX machine gun company.

The commanders felt that most of all the peasant son Ovcharenko would be useful to the Motherland as a riding one. The duties of the Red Army included the supply on a cart to the positions of a company of food and ammunition. The task in the war is not the most dangerous, and Dmitri went alone, being armed only with a three-line one.

In mid-July, 1941, the Ovcharenko unit fought near the Moldovan city of Balti. On July 13, as usual, the rider drove ammunition and products to fellow soldiers.

But the number “13” is not for nothing that is unhappy. Suddenly, on the road right on the Ovcharenko carriage, two cars jumped out in which the Nazis were - three officers and an 50 soldier.

For the confusion of the start of the war, such enemy breakthroughs to the rear of the Soviet troops were commonplace. Red Army from this, however, it was not easier. A machine gun was aimed at him, a rifle was taken away, after which a German officer approached began to interrogate the prisoner.

Believe it or not, but the documents show that this happened at a place called ... Arctic Fox.

It is not known whether the Red Army soldier Ovcharenko said to himself the name of this settlement, but his position was indeed unenviable.

The ax of war

The Nazis also felt confident and even relaxed - in the first days of the war they often took Soviet soldiers into captivity, so that the captured, frightened Russian (Ovcharenko was a Ukrainian, but the Germans didn’t get into such subtleties) was another proof of the superiority of Aryan soldiers over Slavic "Subhumans."

The officer interrogated Dmitry here, in the carts. The rifle was taken away from him, so no waiting was expected of him.

Meanwhile, in the hay beside the standing Dmitri lay an ax, which the Germans either did not notice or did not consider to be a threat.

For a city dweller, an ax is rather something exotic. And for the peasant, and even more so for the son of a carpenter, this is one of the main tools of labor. And chop wood, and build a house — a lot of where the villager cannot do without an ax. And sometimes the ax was used in order to, for example, scare away the bear sticking in the forest.

What Ovcharenko was thinking about, standing in front of a German officer, is unknown, but he is unlikely to count the odds in a fight in the “one against fifty-three” format. It was just that at some point the soldier decided that, as the Red Army soldier Sukhov used to say, “it is desirable, of course, to suffer.”

Suddenly, he grabbed the ax, and with one stroke blew his head off the German squad leader. The headless body sank to the ground.

The Germans expected anything, but not such a turn. For a few seconds from the shock they fell into a stupor.

These seconds Ovcharenko was enough to dive into a cart, pull out three grenades, and send in the midst of standing enemies.

When the smoke cleared, those Germans, who were not hit by shrapnel, appeared in front of their eyes a terrifying picture - their dead and wounded comrades lay everywhere, and an angry Russian soldier with an ax flew right at them.

In the books of the ideologues of the Third Reich, much was written about the superiority of the Aryans over other races. But in “Mein Kampf” nothing was said about how to cope with an angry Slavic carpenter in army uniform.

And more than two dozen Germans ran in horror from Dmitry Ovcharenko, forgetting about their own weapons, and in general about everything in the world.

Far from everyone managed to escape - for example, one of the two remaining officers who tried to escape through the gardens, the Red Army man overtook, and re-launched the ax, depriving him of his head.

When only German corpses and Ovcharenko, a Red Army soldier, remained on the improvised battlefield, the winner collected the documents of the dead, officer plates, and went to his native company.

The Red Army soldier innocently told about what happened to him on the road, and immediately subjected to ridicule fellow soldiers: "Come on, much more you invent!"

However, the political officer of the company, looking at the documents brought, whistled in amazement, and, taking several fighters, went to the scene of the events.

When they calculated the dead, it turned out that Dmitry Ovcharenko had destroyed two German officers and an enemy soldier’s 21 in this fight.

Heroes do not die

The command, assessing the scale of the feat, sent the submission to the highest award.

By decree of the Presidium of the Supreme Soviet of the USSR 9 of November 1941, "for exemplary performance of combat missions of command on the front of the fight against the German fascist invaders and showing courage and heroism" Red Army Ovcharenko Dmitry Romanovich was awarded the title of Hero of the Soviet Union with the award of the Order of Lenin and the medal "Golden Star".

After this battle, Dmitry Ovcharenko was transferred from sled to machine gunners. He continued to bravely fight the Nazis, went through almost the entire war. But he was not destined to survive until the Victory - during the liberation of Hungary, the 3rd machine gunner in the area of ​​Sheregeies station tank Brigade Private Ovcharenko was seriously injured. He died in hospital from his wounds on January 28, 1945.

The same Germans who managed to escape 13 on July 1941 of the year from the outskirts of the town of Arctic Fox, it seems, tormented by the same nightmare until the last days - an enraged Russian soldier with a bloody ax, from whom there is no escape ...