Having gained independence, Scotland will save the world from new wars ... 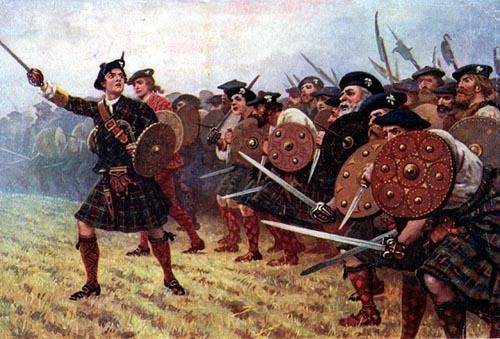 For several centuries, Scotland, which had lost its independence, was a supplier of soldiers and resources for the British Empire. Scots, satisfying the British imperial ambitions, died in the Hindu Kush mountains and savannas of Africa, in the prairies of North America, the deserts of Australia and the jungles of India. How many sons and daughters of Scotland were not born because of the passion of the British crown for colonial seizures? How many Scots died away from their homeland for the interests of others?

Having been compelled to participate in the British aggressive wars, the Scots perished in thousands for the British crown, and their mothers and wives mourned them.

Already in the twentieth century, England in every way contributed to the outbreak of the First World War. And Sir Arthur Neville Chamberlain, trying to direct Hitler against Russia, actually gave him the whole of Europe without a fight, thereby strengthening German fascism with its industry and resources.

Sir Winston Churchill spoke at 1946 in the US city of Fulton, Missouri, as the initiator of the start of the Cold War and the nuclear arms race.

In the eyes of tens and hundreds of millions of people, Britain has become a symbol of colonial conquests, the absence of any ethical standards in politics and glaring arrogance towards the conquered peoples. India, Southeast Asia, Polynesia, Africa, Australia, Asia - in all parts of the world, the British military, merchants, politicians were noted as representatives of the British Empire, carrying not the sword, but the sword.

Did all these steps meet the national interests of Scotland? The answer is obvious: of course not!
For centuries, Scotland suffered immense humiliation and was forced to comply with the most draconian laws of Great Britain. Tell me, Scots, did our glorious ancestors who died on the battlefields of Bannockborn and Nevills Cross, Dunbar and Falkirk dream about this? What would William Wallace, Robert Bruce, the Black and Red Douglas, and finally the Scottish martyr king Jacob Stewart think of this?

Before that, whole 500 years (!), From 1206 to 1706 years, Scotland waged wars with England and successfully defended its independence. In 1701, the act of succession deprived the representatives of our Scottish royal house of Stuarts the right to the throne of Great Britain, and the acts of union of Scotland and England of 1706 and 1707 were the meanest deception of the Scots by the British, who received everything without giving the Scotch anything.

Despite the declaration that the Parliament of England and Scotland was supposed to be joint, in reality it rendered almost entirely English.

After the place of the first world power passed to the United States of North America, Great Britain, without losing its ambitions to the end, as a result, became the most limp singing of the most aggressive American circles.
It should be borne in mind that at the time of the conquest of North America from the shores of Great Britain there were mainly the dregs of society — bandits, criminals, prostitutes, pimps, murderers, etc. Of course, from this the moral character and ethical qualities of the citizens of modern USA have by no means become better and more moral.

Thus, at present, the English crown acts as the most faithful ally of the descendants of the dregs of society. Pretty company for the British royal house, isn't it? And the sons and daughters of proud Scotland were forced to play the role of slavishly obedient subjects of the English crown ...

As a result, Scotland now acts as a target for Russian nuclear missiles, as the largest naval bases of the Royal Naval fleet located just in Scotland.

The UK is fully tied to nuclear issues. weapons through the NATO Nuclear Planning Group, and, therefore, the decision on its use will be taken even by England, not to mention Scotland itself, but by the United States.
Nuclear UK forces are included in the US Operational Strategic Hazard Operations Plan (OPLAN). Thus, the United States at any time able to unleash a nuclear war, not even asking about the Scots. Was Scotland chosen by chance as the location of British nuclear submarines? Of course not, since it has always been a second-rate territory for the British crown.

So, for the deployment of nuclear submarines in the UK, the Firth of Clyde was elected. Its high rocky shores, formed by the spurs of the Scottish Highlands, perform well the functions of natural anti-nuclear protection. The bay is a vast water area with a length of about 140 km, width at the entrance of 40 km and at the top about 5 km, with depths from 33 to 164 m. Flowing into the bay r. Clyde has an estuary with many bays (Lough Long, Holy Loch, Gar Lough, and others), convenient for home-based ships.

For the deployment of nuclear missile submarines, the British chose the northern part of the bay Ger-Loch, and the arsenal of missile weapons - the eastern shore of the bay Loch-Long. The naval base (naval base) of the SSBN Faslane is located 32 km north-west of the city of Glasgow and is connected to the administrative center by road. It includes a floating dock, a command post and squadron headquarters, onshore workshops, warehouses for various purposes, personnel barracks and a training center for training SSBN crews. Floating AFD 60 has a load capacity of 9000 t, length 168 m, width 28 m; It is equipped with cranes and repair shops. The training center has training equipment purchased in the United States, including simulators for practicing the actions of personnel in launching and launching Polaris missiles. With the completion of the construction, all British SSBNs, organized in the 10 Squadron, began to be based on the Navy Faslane.

There is no doubt that in the event of a nuclear conflict, Scotland would become a radioactive desert, where there would be no place for life. And all because of the fact that the British crown really wanted and wanted, if not to be, as before, the mistress of the seas, then at least be on the sidelines in the North American states ...

Having lost Scotland as a result of the upcoming September 18 referendum, and its results are no one in doubt, the United Kingdom will finally cease to exist.

The British Empire, which for centuries unleashed bloody wars, will go into oblivion.

The armed forces of Great Britain, having lost the naval bases on the territory of Scotland, and, most importantly, the Scots themselves, of whom the best regiments have always been recruited, will significantly reduce their ability to participate in various kinds of aggression.

The warlike Great Britain will finally stop provoking the world to new wars.

Its decisive role in unleashing bloody conflicts will remain forever in the past.

The victory of the supporters of the independence of Scotland will result in the loss of a third of its territory and a tenth of its population for the United Kingdom, a huge reduction in industrial potential. The mountains and lakes of Scotland will belong to the Scots.

Scots! You know how to vote 18 September. And you must remember that your every vote will determine how you will talk about Scotland in the future: as part of the British Empire, which, for its history shed rivers of blood, or as a free nation, cast off the imperial shackles, and once and for all decided to become worthy of their ancestors.

And let the British Prime Minister David Cameron raise in front of his residence even the 1000 flags of Scotland, this will not change anything ...

It is said that my great-great-great-grandfather, a distant descendant of King Jacob the Second Stewart, Ron Stewart, loved to repeat:

- God save Scotland from the queen!

And I gladly repeat his words.