12 September 2014
44
Eve pages ITAR-TASS A thorough interview with the Minister of Foreign Affairs of Russia Sergey Lavrov was published in the framework of the “First Persons” project. Sergei Lavrov today can be attributed to the pleiad of those domestic political figures who are on a kind of outpost, defending the Russian position and Russian interests, bringing the Russian point of view on what is happening in the world through the accretions that our expensive "partners" are trying to pour out Russia. 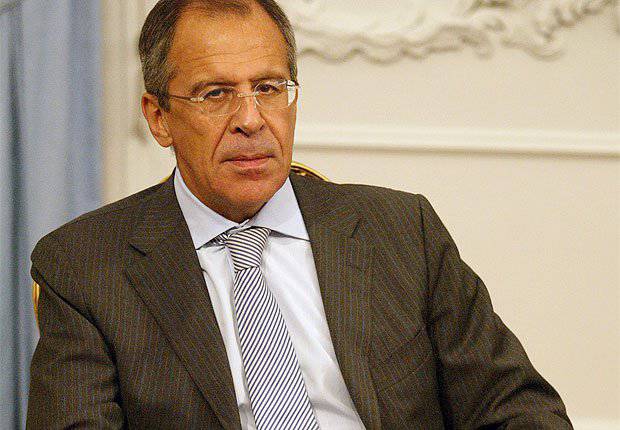 One of the first questions to which Sergey Lavrov answered was related to the presence of experienced partners “on the other side of the barricades”. The head of the foreign ministry was asked who he could enumerate as “mature” diplomats. Sergey Lavrov's answer was, for obvious reasons, diplomatic, but at the same time it had a very interesting implication. The Foreign Minister said that he had no right to single out some and offend others, while adding that there are solid opponents who have their own point of view, but there are experienced ones who fulfill (quote) “instructions of one or another regional committee”.

Judging by the dynamics of events that have manifested themselves in recent years, truly independent partners in the world are becoming less and less. At the same time, the number of those who are inclined to dance to the “obkomovskuyu” tune and to build from themselves a representative of the global diplomatic establishment is growing. The most striking example of the confirmation of Lavrov’s words about the different statuses of the “maturity” of diplomats in the modern world are dialogues within the walls of the UN. The whole essence of the meeting of the UN Security Council on the need to adopt a resolution comes down to a banal bargaining. Samantha Power, the well-known Samartha Power, acts as the main market baza, trying to win over as many puppies as possible to the US interests. If suddenly one or another puppet shows something similar to one’s own opinion, then the market turns into a bird’s one, and there’s no real solution to the problem. The hubbub, mutual recriminations, threats, ridicule, provocations are the twisted face of global “diplomacy”, which is really disgusting to look at today.

Sergei Lavrov:
The law for our Western partners is that the pole ... And this is understandable. The democratic structure of the world does not fit into the policies of the present-day West, which is striving at all costs to maintain its position held for centuries. It becomes more difficult to do this. In short, the international system is in motion, the foundations have staggered, they are being swung very, very actively ...

According to the Russian minister, Russia has consistently supported the strengthening of international law and suggests respecting the agreements reached and creating new tools to respond to contemporary challenges.

The topic that manifested itself during the interview is international relations based on the participation or non-participation of countries in bloc military programs. Sergei Lavrov noted the strangeness of the “security” model that the Western world is trying to implant. We are talking primarily about the expansion of NATO.

Sergei Lavrov:
(...) The North Atlantic Alliance provides protection to all who belong to it. But he does not guarantee the safety of those who are not included.
Apparently, the idea was to tighten the post-Soviet countries into NATO under this pretext and move the dividing lines to our borders. But the idea failed.

But the West, apparently, is not inclined to believe that the idea of ​​expanding NATO to the East (closer and closer to the borders of the Russian Federation) has failed. If I had, I would have refused it long ago. But with the stubbornness of the insane, the North Atlantic Alliance continues to swell, accepting even those countries that by definition weaken it. The leadership of these countries, which is influenced by the well-known "regional committee", believes that joining NATO is a panacea for all threats. They say that we will join NATO, and there will not even be any grass to grow - French, German, American and British soldiers will come and protect them from the “Russian threat”. But only after numerous fiascos related to the NATO invasion of certain countries, already by the American, French, British, German and other NATO soldiers, the desire again and again to cross the border under the banner of pseudo-democracy, tends to zero.

And the territories of the states that have become new members of the alliance are not perceived as friendly, and not as equal in status, but as frankly colonial. The recent NATO exercises in the Baltic States, when the sailors of the Netherlands urinated on flowerbeds in the city center and showed their reproductive organs to passersby, alternating such shows with the implementation of gag reflexes, demonstrated a real attitude to the eastern newcomers. But they have to endure, because they were promised safety: let them urinate on their flowerbeds and doors, turn the cities into the objects of mass leisure of the NATO military with drunkenness and attendant vandalism - that's okay, safety is above all ... Dear Dutch defender, savior from the “Russian yoke”! ..

Sergei Lavrov:
You see, the classic alliances of the Cold War era have exhausted themselves. About NATO throwing in search of the meaning of existence, I have already said. We have the CSTO, our military-political alliance. But there is no cane discipline in it. Sometimes we hear, they say, look at how NATO members are voting in the UN: the US commanded, and everyone raised their hands (though everyone knows that before that many were harshly treated). And representatives of the CSTO countries can support the initiative of Russia or abstain, or even skip the meeting, as it was when a resolution was discussed at the UN General Assembly after the Crimean events.

Sergey Lavrov thinks in an interview, of course, about the situation in Ukraine and around Ukraine. The Foreign Minister says bluntly that Western countries, for which there are no uniform political laws as such, are in fact the main scriptwriters and sponsors of the Ukrainian bloodshed. If for European politicians (from Germany, France and Poland) their personal signatures under the document from 21 February 2014 mean nothing, then does the fate of the Ukrainian people mean anything to them? ..

Sergei Lavrov:
We asked Western colleagues: how is that? After all, you signed a document that was supposed to lead to calm the situation. We were answered: since there is no Yanukovych in Kiev, the agreement is no longer valid. Curious logic! Firstly, he was in the east of Ukraine, in his own country. And secondly, it turns out that the task of national reconciliation was associated exclusively with the person of Yanukovich and his elimination? What are these European values? No answer so far.

There will be no answer. It will not happen as long as the West considers that there is only one pole in the political world today. In this case, there will be no answer on the tragedy in Odessa, and on the execution of civilians in Mariupol, and on the downed Malaysian Boeing, and on a whole series of war crimes of the Kiev junta in the Donbass. It will not happen, since the junta is the western brainchild, flesh of the flesh. It is the model for which the United States and their dolls cling to as the only suitable, and gave rise to Ukrainian fascism. Again the dream of the mind ...

Sergey Lavrov is sure that if Russia had not shown a known position on the Crimea, then on this peninsula today bloody strife, similar to Donetsk and Lugansk, would have flared. The junta would not have stopped here either. More precisely, those who sponsored the Kiev coup d'etat simply wouldn’t stop it. The Foreign Minister says that if the West is not satisfied with the legitimacy of recognizing the independence of Crimea and its subsequent entry into Russia, then let it be better to look at Kosovo ...

Sergei Lavrov:
(...) Belgrade and Pristina were negotiating, somehow, but moving forward. The Western countries took a date from the ceiling, setting an artificial framework for reaching agreements, the Kosovo Albanians skillfully played along, after which they hypocritically threw up their hands in Europe and America: they say, since you could not agree on time, we unilaterally recognize Kosovo. Everything! To the question "How so?" we were told that a lot of blood had been spilled in Kosovo. According to this logic, it was necessary to wait until the Crimea was flooded with corpses, so that the United States and Brussels would mercifully allow the surviving Crimeans to decide their fate?

Sergey Lavrov commented on the situation with the Ukrainian accusations of Russia that allegedly the Russian regular army is fighting in the Donbas. The head of the Russian diplomatic department said that the Ukrainian authorities had recently become accustomed to using simplified slogans to the limit in order to manipulate public opinion. Indeed, after the ban on Ukraine 15 of Russian TV channels, after the persecutions, abductions and murders of journalists, the information space of Ukraine was almost completely in the hands of the junta and those whose interests it defends. And the fact that Kiev is trying to carry through this space (and in what other way all this is being presented) causes, at a minimum, bewilderment: entire Russian divisions are “dying”; literally in a day, valiant Ukroarmia fighters here and there “grab” FSB agents , officers of the GRU. American satellites give out such pictures under the guise of evidence of the “Russian invasion”, that it’s time to ask a question: these are the new technologies of photographing from space: either rocket launchers, or combines (as one American farmer stated), or even flies, slammed by the newspaper after receiving images from space.

Sergey Lavrov is confident that the West continues to follow the path of the implementation of the program for containing Russia:
There would not be the Crimea and the south-east of Ukraine, the West would have invented something else. The goal has been set: to bring Russia out of balance at any price. The task was formulated long ago. Take the same Syria. A couple of years ago, they attacked us as defenders of a dictator who tyrannizes his own people.
(...) there would be a desire, but there will be a reason. Washington and some European countries did not decide yesterday to isolate Russia.

Isolation of Russia without political and economic losses for loved ones and with simultaneous access to the resources of Russia is the long-held dream of the West. That's just the fuse for the realization of this dream of the "partners" in fact, there are not so many. After all, it was enough for Russia only to indicate the fact of the formation of a multipolar world, as the western powder got pretty wet ... Now they cover the wet spot on the “democracy” costume with folders with sanctions ...