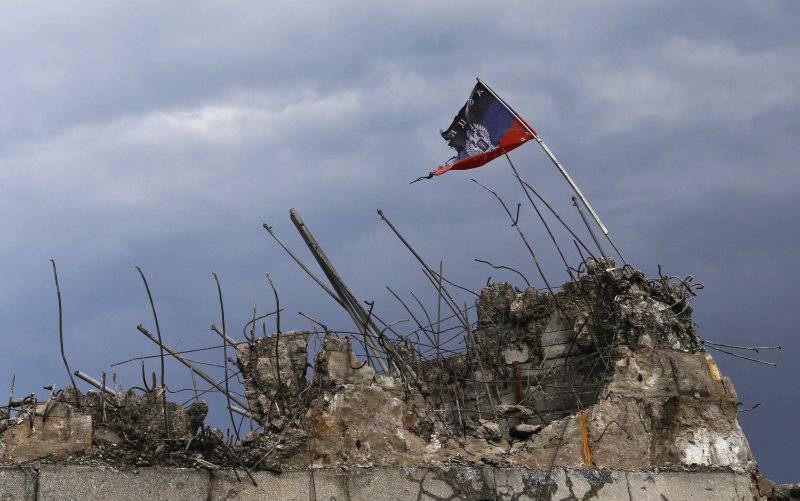 The socio-economic situation in the Donbas is very acute. Lugansk is actually a month without water, electricity and communication. Donetsk is also under siege. Food delivery to the region is difficult. Utilities work intermittently. The Ukrainian authorities have completely thrown the region, leaving it to stew in its own juice and not fulfilling social obligations to those who formally remain citizens of Ukraine.

In economic terms, the Donbass has always been the engine of the Ukrainian economy. It housed the largest coal, metallurgical and chemical enterprises. During the civil war, most of them, which fell on the front line, ceased to function. For example, the enterprises of Metinvest holding, which in the past belonged to the largest Ukrainian oligarch Rinat Akhmetov, have ceased to function. The chemical giants Debaltsev and Severodonetsk stopped or were simply bombed. Metallurgical plant of Alchevsk is also idle. As a result, conditions were created for the bankruptcy of Donbass as an economic entity. Total losses from the war according to various estimates range from a few to hundreds of billions of dollars.

As a result, we can say that the entire production base for Ukraine is lost. Donbass itself cannot use its industrial giants. Thus, the authorities of the DPR and the LPR are not able to independently sell products, since the only legal customs are located only on Ukrainian territory. But Russia does not accept cargoes in a different way. As a result, a large part of the economically active population still remaining in the Donbas may be out of work for a long time, which will lead to a collapse in the region.

The authorities of the people's republics are interested in restoring their economic potential and restoring international sectoral ties. What is needed for this and who will “raise” the Donbass?

There are several sources of economic revival. Local political elites are primarily counting on help from Russia, but she is still in too complicated diplomatic conditions of constantly pressing sanctions that prevent Russian business from openly entering the DNR and the LC. This issue will be resolved simultaneously with further promotion of the issue of the state status of Donbass.

Another source of financial income can be local businessmen. Oligarch Rinat Akhmetov, by the way, did not stop contacts with the militias, since most of the assets of Akhmetov’s holdings Metinvest and DTEK are in the hands of the militias. However, his policy towards the DNI is very controversial. While behind the scenes behind the scenes, Akhmetov simultaneously formed volunteer squads from the workers of his enterprises to help the Ukrainian armed forces. Such a pendulum makes the part of the leadership of the DPR to nationalize Akhmetov’s property in order to establish the normal operation of enterprises within the DPR as a separate state from Ukraine. However, such inclinations were restrained by the leadership of the republic in the person of former Prime Minister Alexander Borodai. Now with the arrival of “camouflages” headed by the new Prime Minister Alexander Zakharchenko and Defense Minister Vladimir Kononov to the government, the issue of nationalization has been relegated to the background compared with military operations. However, the question of obtaining sources of filling the budget of the people's republics is still standing.

Obviously, part of the Donbass elites, realizing that the Donbass economy in Ukraine is tied up and the difficulty of quickly canceling customs borders with Russia, is counting on maintaining ties with the Ukrainian oligarchs who own property in the Donbas. In this vein, last week a statement was made by the First Deputy Prime Minister of the DPR, Andrei Purgin, that the DPR is ready to maintain close economic ties with Ukraine.

On the Ukrainian side, the issue of restoring the Donbass, more precisely, the part that is controlled by the Ukrainian forces, is also being actively studied. Prime Minister Arseniy Yatsenyuk has repeatedly stated that the government intends to hold talks with the IMF and the World Bank in order to attract the appropriate investments. Called figures of several tens of billions of dollars. However, taking into account the growing holes in the Ukrainian budget, which are already covered by the IMF loan, the provision of new tranches will finally put Ukraine in dependence on Western financial institutions. The restoration of Donbass will be the "Marshall Plan" for the complete subordination of the EU and US economy to Ukraine.

At the same time, some Western politicians are trying to persuade Russia to maintain close cooperation with Ukrainian partners and take a direct part in the resumption of active business life in the Donbas. In addition, they directly want to force Russia to pay for the destruction, since it is alleged that “it is she who is responsible for the actions of the militiamen”. Such a formulation of the question does not stand up to criticism from banal logic: Russia cannot be responsible for the destruction in the course of someone else's civil war. However, attempts to force Moscow to supply Ukraine with gas at reduced prices and to forgive part of past debts are all links in one chain in terms of forcing Moscow to finance the dying Ukrainian economy. However, judging by the Russian position, these attempts will not be crowned with success, and Ukraine itself, together with the Donbass business, will have to restore what it has destroyed.