As deceived by the military of Stalin ... 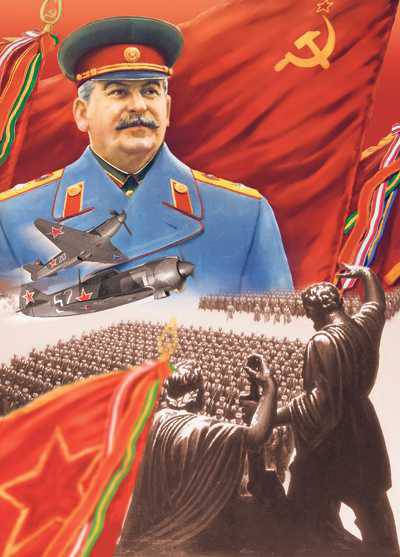 How they deceived Stalin ... Many myths and talk about Stalin as a dictator - a word that was the law for all mortals. But when reading the memoirs of marshals, we face a completely different Stalin. I want to give how the military deceived Stalin during the Second World War memoirs of the Chief Marshal aviation AE Golovanova “Long-range bomber ...” ....... I don’t remember exactly the day, but it seems that it was, in the spring, in April, Stalin called me and asked if we would take all the ready-made planes out of the plants on time. I replied that we were picking up the planes as they were ready.


- And do you have any data, is it worth a lot on the airfields of the planes presented by the plants, but not accepted by military representatives? - Stalin asked.
I could not answer this and asked permission to clarify the necessary information for the answer.
- Good. Specify and call, - Stalin told.
I immediately contacted I. V. Markov, the chief engineer of the ADD. He informed me that there were no aircraft and non-accepted aircraft presented at the factory airfields. I immediately reported this to Stalin by telephone. [168]
- You can come? - Stalin asked.
- I can, Comrade Stalin.
- Please come.
Upon entering the office, I saw General PF Zhigarev, the Commander of the Air Force, there, who was hotly proving to Stalin. Having listened to the conversation, I realized that we are talking about a large number of aircraft standing at factory aerodromes. These planes were allegedly submitted to military acceptance, but were not accepted, as they said then, “in combat,” that is, they were not capable, they had various technical defects.
The general finished his speech with the words:
- And Shakhurin (People's Commissar of Aviation Industry - A.G.) is lying to you, Comrade Stalin.
“Well, let's call Shakhurin,” said Stalin. He pressed the button - entered Poskrebyshev. “Ask Shakhurin to come,” Stalin ordered.
Coming up to me, Stalin asked if I knew for sure that there were no aircraft on board, but no aircraft for ADD. I reported that the chief engineer of the ADD assured me: there are no such aircraft.
“Maybe,” I added, “he has data not from today, but we carefully monitor the release of each aircraft, as we know, new formations are going on.” Maybe one or two planes are standing somewhere.
“This is not about such numbers,” Stalin said. A few minutes later, A. I. Shakhurin appeared, greeted him and stopped, looking inquiringly at Stalin.
“They assure us here,” Stalin said, “that the seven hundred aircraft that you told me about are on the airfields of the factories not because there are no pilots, but because they are not ready for battle, therefore they are not accepted by military representatives, and that the pilots in anticipation of materiel live there for months.
“This is not true, Comrade Stalin,” answered Shahurin.
“You see how it turns out: Shakhurin says that there are airplanes, but there are no pilots, and Zhigarev says there are pilots, but there are no airplanes.” Do you both understand that seven hundred planes are not seven planes? You know that the front needs them, and here the whole army. What are we going to do, which of you to believe? - Stalin asked.

There was silence. I watched the conversation with curiosity and amazement: was it really true that as many as seven hundred aircraft were on the airfields of the factories, even if they were not ready for battle or because of the lack of pilots? I have never heard of such a large number of aircraft located at the aerodromes of factories. I looked at Shakhurin, then at Zhigarev. Which of them is right? [169]
The autumn 1941 of the year was involuntarily remembered, when Zhigarev promised Stalin to select a regiment of fighters to cover the rifle division discharged on one of the fronts, but it turned out that he did not have fighters. How did Pavel Fedorovich then get out of a very, I would say, delicate situation? Has anyone with these planes let him down even now? I already knew Alexei Ivanovich Shakhurin as a person who could not make these or other statements, and even more so the ones in question without first checking, more than once, the accuracy of the data reported to the Bid.
And then came the confident voice of Zhigarev:
- I am responsible, Comrade Stalin, reporting that the planes in the factories are not ready for battle.
- What do you say? - turned Stalin to Shakhurin.
“After all, it is easy to check, Comrade Stalin,” he answered. “You have straight wires here.” Give the task that you personally, each factory director reported on the number of combat-ready aircraft. We add these numbers and get the total number.
- Perhaps, correctly. So let's do it, ”Stalin agreed. Zhigarev intervened in the dialogue:
- It is imperative that the telegrams along with the directors of the factories sign and military representatives.
“That is also correct,” said Stalin.
He called Poskrebyshev and gave him the appropriate instructions. Zhigarev asked Stalin to call General N. P. Seleznev, who was in charge of orders at the factories. Soon Seleznev arrived, and he was given the task of counting how many airplanes were on the airfields of the factories. Nikolai Pavlovich sat down at the table and started counting.
I must say that the organization of communication, Stalin was excellent. Very little time passed, and telegrams from the factories signed by the directors and military representatives were put on the table. He finished the counting and General Seleznev, who did not know about the conversations that were conducted before him.
- How many planes are in factories? - turned Stalin to Poskrebyshev.
“Seven hundred and one,” he answered.
- And you? - Stalin asked, turning to Seleznev.
“I got seven hundred and two,” answered Seleznev.
- Why they are not overtaken? - again, turning to Seleznev, Stalin asked.
“Because there are no crews,” answered Seleznev. [170]
The answer, and most importantly, his intonation did not cause any doubt that the lack of crews in the factories is a question that has long been known.
I am not a writer, however, it seems to me that the writer, even a very talented one, could not convey the impression that General Seleznev’s response made, all those emotions that affected the faces of those present, I cannot find a comparison, for even the famous scene Gogol's comedy after the remark: “An auditor is going to us” is incomparable with what I saw then in Stalin's office. It is incomparable, first of all, because here was a living, but sad reality. All those present, including Stalin, froze and stood motionless, and only one Seleznev calmly looked at all of us, not understanding what was the matter ... It lasted for a rather long time.
No one, even Shahurin, who was right, dared to continue the conversation. He was, as they say, ready for battle, but he himself, apparently, was surprised by the simplicity and truthfulness of the answer.

The case was clearly unprecedented. Something will be now? I looked at Stalin. He was pale and looked with wide eyes at Zhigarev, apparently with difficulty comprehending what had happened. It was felt that he was stunned not by why such a huge number of aircraft was still not at the front, which he knew was unidentified only the reasons, but the conviction and confidence with which the general was not telling the truth.
Finally, the face of Stalin turned pink, it was clear that he pulled himself together. Turning to A. I. Shakhurin and N. P. Seleznev, he thanked them and said goodbye. I wanted to follow their example, but Stalin stopped me with a gesture. He slowly approached the general. His hand began to rise. “Will it really strike?” - a thought flashed through my mind.
- A scoundrel! - with an expression of profound contempt, said Stalin and lowered his hand. - Get out!
The speed with which Pavel Fedorovich withdrew, apparently, corresponded to his condition. We stayed together.
Stalin walked around the office for a long time in silence. Looking at him, I thought too. What will, self-control must be had, how this amazing person, whom I learned more and more every day, knew how to control myself.
Why did he call me and make me present at what was just happening? Gave me a subject lesson? May be! Such things remain in memory for life. What would he do with the general now?
- Here, go and work with such a person. He does not even know what is going on in his own diocese! - finally Stalin spoke, interrupting the course of my thoughts.

Here you have a typical example with whom and how Stalin had to work.

We are in Yandex Zen
About Stalin and Khrushchev
What you didn't want to know about England
9 comments
Information
Dear reader, to leave comments on the publication, you must to register.