The war until the complete exhaustion of the "United Ukraine" 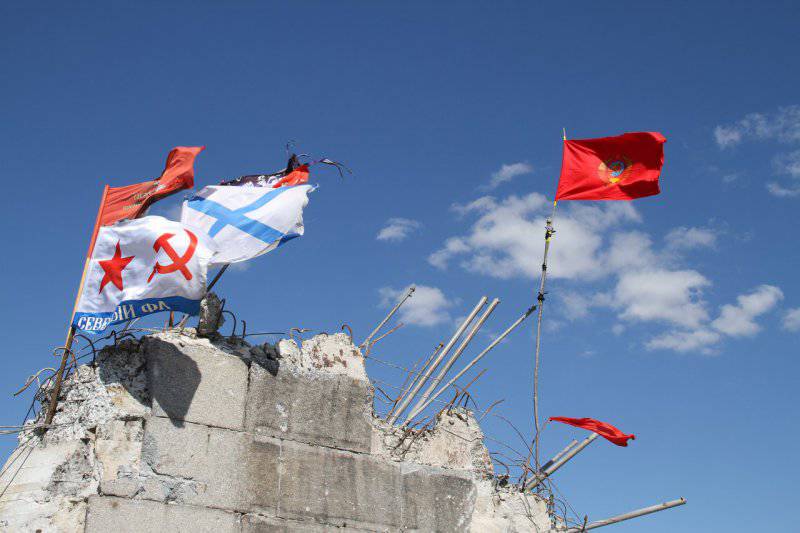 Sad prediction about the future of the former independent state

“War is the continuation of politics by other means,” said the once famous German military historian Karl von Clausewitz. Nowadays, when we are at the turning point of the situation in the as-yet-undeclared war between the “United Ukraine” seized by the junta and the already-born “Novorossiya”, which rebelled against the tyranny of the junta, the thought of the scientist is remembered especially often. I deliberately quote the names of both parties to the conflict, because both entities are now in the hardest political crises: “United Ukraine” is in a crisis of decay, and “Novorossiya” is in a crisis of its birth.

The war really is only a “continuation of politics by other means” at that moment when the previous tools and methods of political struggle are no longer in operation, and the new ones have not yet been created and have not been tested by the war itself. The war has its own murderous (in the direct and figurative sense) logic, which cannot be explained according to the canons of peacetime, it is impossible to reduce it to a calm political discussion of the form “Boris, you are not right.”

In peaceful life, we usually operate only with probabilities and assess their impact on our lives very calmly, but in war we have to talk all the time about the possibilities - our own and our opponent - and take them into account not as ephemeral probabilities, but as visible dangers for ourselves and for its physical existence in a possible future.

Returning to the legacy of Clausewitz, two more of his quotes can be cited, which quite vividly and concisely reveal this approach, the approach of "dangers" rather than "probabilities":

"In such things as war, the mistakes of benevolence are the worst of all." “While the adversary is not crushed, I must fear that he will crush me: therefore, I have no power over my actions, because the adversary dictates the laws to me just as I dictate them to him.” It is this fact, the fact that it is impossible to be “slightly pregnant” or “slightly exposed” in war, and eludes most researchers and forecasters. The fact that in a war the parties act under the pressure of the actions of the enemy, breaks all the seemingly fully verified and balanced political technologies.

В stories There have been several examples of such “frozen” conflicts in the world. The freshest of them can still be seen on the map of Southeast Asia - this is mainland China and Kuomintang Taiwan, North and South Korea.

Such conflicts are frozen for decades. Despite a common history, despite family and friendly ties, such a conflict finally separates people - first on different sides of the same barricade, and then on different sides of the state border. The final design of the resulting communities of people can be very different - from full-fledged classical states to very exotic constructions of the type of Bosnia and Herzegovina or Northern and Southern Cyprus, which can either preserve the conflict within the country or break up into two unequal and unequal parts.

Total victory is the physical and political destruction of one of the parties. The Reds expelled whites from everywhere, leaving them no “island of Crimea” to create their “White Russia”; Nigeria completely swallowed Biafra; The Yankees completely cleared the “Dixie country”.

We will try to calculate these probabilities, understanding that the parties to the conflict perceive them precisely as a danger to themselves.

The probability of the complete destruction of Novorossia is directly proportional to the balance of forces between the parties: 6 of the millions of Novorossiya residents as of 1 September are opposed by at least 35 to the millions of residents of the rest of United Ukraine. The mobilization potentials of the parties are purely mathematically related as 1: 6 - the opposing side can put at least 6 soldiers on every soldier of the Novorossia army.

Hence, there is an imperative for the actions of Novorossia - this is, at a minimum, going to the line Kherson - Zaporozhye - Dnepropetrovsk - Kharkiv, which will still reduce the ratio of the parties to the conflict to more or less equal and at least stop mobilizing people into the punitive battalions of the “United Ukraine” "In the south-east of Ukraine.

Once again, in the existing configuration, pressed to Russia and deprived of access to the sea, in a situation when the main cities of Novorossia are under constant artillery and mortar fire, Novorossia loses the exhaustion fight. The vital task that solves the question of survival is for her to ensure tranquility and rear life in the main cities of Donetsk-Lugansk agglomeration - Donetsk, Gorlovka, Lugansk. This task can be accomplished from a purely military point of view only as a result of reaching certain natural defensive lines — in a clean steppe near Donetsk it will be impossible to organize any solid defense.

New Russia needs a seaport for its subsequent survival, and therefore, sooner or later, it needs to free and secure Mariupol, resolve the issue with Berdyansk and Genichesky, eliminating them as bases for deploying the Navy of the united Ukraine, which, of course, will try to ensure the Mariupol naval blockade obstruct shipping from this port.

New Russia needs the Dnieper as a natural water barrier - two bridges in Kherson, a dam in Nova Kakhovka, a shallow Karkinitsky Gulf - all these geographical features make it easy to organize strategic defense in the south of Novorossiya, in the historical Northern Tavria.

Harder to determine the northern flank of opportunities. It is easy to imagine the front line along the Dnieper, but the largest cities in the region - Zaporozhye and Dnepropetrovsk - in this case turn out to be cut in two. It is easy to understand the positional front along Samara and Orel - and right up to the origins of the Seversky Donets near Volchansk, but what happens to Kharkov if the army of the militia approaches it only 30-40 kilometers?

However, in general, you can imagine some natural boundaries of "Novorossiya", which it will be possible for it to protect and maintain. Moreover, these borders are conveniently defended by the “United Ukraine” - in this case we will get the reincarnation of the next truce of Andrusovo (of course, in the modern edition).

But can “Edin Ukraina” resist this configuration? Most likely no.

The output of the army of Novorossia to such frontiers, as I have already said, will unequivocally raise the question of uprisings in Kharkov, Zaporozhye, Dnepropetrovsk, Nikolaev and Odessa. Having lost Tavria, part of Slobozhanshchina and Dnieper, “United Ukraine” automatically loses all the southeast, and access to the sea in the area of ​​Odessa. Just because the urban uprisings in the rear will multiply and grow like mushrooms after rain, and they can be stopped only at the borders of the root, dormant and indifferent until Central Ukraine.

Therefore, I do not want to upset the emerging political nation of Novoross, but for us this is a war of survival. The sole purpose of "United Ukraine" in this case is our complete destruction as an organized and political force.

In the case of Novorossia, options are possible. Having resolved the issue of the security of their main cities and ensuring economic self-sufficiency due to the unification of the entire southeast of the former United Ukraine under the banner of Novorossia, the new state decides for itself the question of survival and may continue to wage a war of attrition of the United Ukraine. instead seek its complete destruction.

Clausewitz said: “Kind-hearted people may, of course, believe that there is some original way to disarm and defeat the enemy without spilling much blood, they are also free to think that this is the true achievement of the art of fighting. It sounds attractive, but in fact it is a hoax that needs to be discovered. War is a very dangerous thing, in which the worst mistakes come from kindness. ”

The division of the United Ukraine is possible. Recall the 1: 6 ratio now and a possible almost equal ratio tomorrow. If the parties are exhausted in the confrontation on the line of the Dnieper, then we will have two Ukraine. If the regime in Kiev collapses before Novorossia, then, most likely, all that remains of the former “United Ukraine” is the real “Ukrainian Taiwan” from the three most western regions. But already without Transcarpathia.

However, of course, political consultants who serve the conflict on the part of the junta and secretly support it in Moscow, will now try to stop the war. The absolute desire of Kiev now is to preserve the conflict on the ratio of the parties 1: 6 and the subsequent war of attrition in this beneficial configuration. That is why such unprecedented pressure is now being exercised on Novorossia and on Russia directly and indirectly supporting it. The already concluded deals are being canceled, new sanctions are being introduced, the rhetoric of diplomats is being tightened, and the media controlled by the West and Kiev are frenzied.

Is it worth it to give in to all these games of political technologists to the militias, field commanders, the inhabitants of Novorossiya who suffered their victory? I think no. The two existing republics, and even deprived of access to the sea in the form of such a close, but not yet captured Mariupol port, are not viable even in the perspective of four or five months: they may simply not survive the harsh winter.

In war everything is very simple. But the simplest is usually the most difficult.

After all, war is always fought to victory - and the point.