Trouble for the USAF from its own politicians 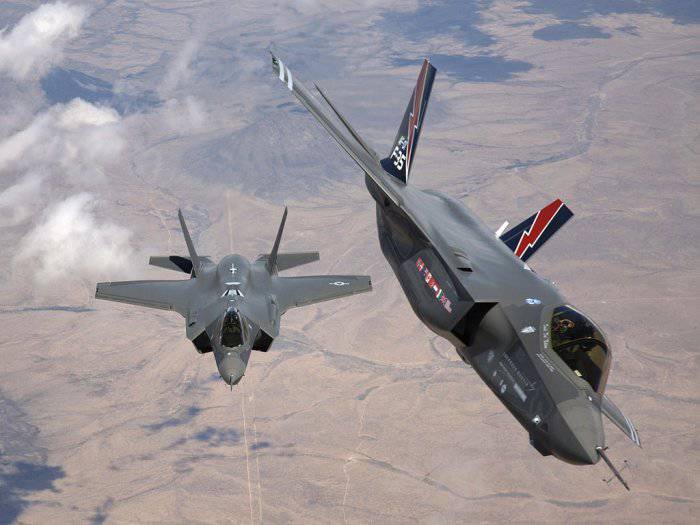 The extremely unfortunate week was for the US Air Force, writes well-known military expert Lauren Thomson, Ph.D. at the USA Lexington Institute, DefPro reports. First of all, the “black” past week for the US Air Force made the senior members of the Senate Commission for the Armed Forces of the state write angry letters to the Pentagon criticizing the current programs designed to completely replace obsolete aircraft in the US Navy.

In one of the letters signed by Karl Levin, chairman of the commission, and John McCain, the oldest member of the Senate commission from the minority party, politicians expressed frank dissatisfaction with the increase in financial costs of the F-35 Joint Strike Fighter (JSF) program, officially launched in 1996, and they demanded to make final calculations in order to stop work on the program in case of unreasonable high cost of aircraft.

F-35 Lightning II is a 5-generation subtle, promising fighter-bomber created by the American company Lockheed Martin Aeronautics Company and presented in three versions: for the US Air Force - ground-based fighter - CTOL, for the American Marine Corps - fighter with vertical landing and short take-off - STOVL, for the Royal fleet Britain and the United States Navy - carrier based fighter - CV.

According to most experts, the aircraft does not meet the large number of requirements for the 5 generation fighter and is nothing more than the 4 + generation fighter due to the lack of ability to fly at supersonic speed without the use of an afterburner, relatively high ESR, low thrust ratio, and low survivability and lack of necessary maneuverability. To develop this aircraft for April 2011, more than $ 56 billion has already been spent.

In another letter, which John McCain himself wrote, the politician warns the US Congress not to allow increasing costs, which will later lead to cost overruns under the current KC-46 program, aimed at creating a completely new generation tanker aircraft. These letters extremely outraged Loren Thomson as an expert.

The KC-46 tanker aircraft, he points out, was to replace the existing thousands of planes of a similar type that had been created under President Eisenhower and which are the basis of the modern fleet of aircraft of the US Air Force, according to plans by the US Air Force.

The KC-46 was developed on the basis of the current tanker KC-767, a classic machine of its class, which was created, in turn, on the basis of the version of the 767-200 aircraft. Two economical GE CF6-80C2 turbofan engines allow an aircraft to bring its normal cruising speed (851 km / h) to the highest (915 km / h).

Without adopting new fighter aircraft, the US Air Force gradually risks completely losing the ability to operate effectively in the airspace of a potential enemy. The expert also recalled that the US Air Force began to buy new F-22 fighter jets, but this program was stopped, hardly satisfying even half the needs of the US military. So today, the F-35 program is obliged to bear the brunt of providing the US air force with modern fighters, while there is still time, the author of the article warns about the angry letters of politicians.

It would be difficult to even imagine what would happen if they decide to stop funding two currently important programs to update the US Air Force fleet, it is not clear that the article would be reasonable. The F-35 fighter will need at least a dozen years to reach its current state and many more years to be accepted as a combat unit and eventually it became active on the real battlefield.

Start all over again? This will be the collapse of all the ideas of the United States to have superiority in the airspace over such rapidly developing countries as, for example, China. It is not even about losing the billions of dollars already spent.

Such a regression in the modernization of the US Air Force is just the last episode in the endless saga of the struggle to improve the US flight service, left alone with the outdated technology of the Cold War years. Most aspirations to acquire a modern aircraft for the US Air Force end in failure. Because of this, America is losing its former air superiority. Russia and China are not standing still and are constantly working to improve their aircraft. The United States is simply obliged to continue replacing outdated aircraft with modern ones, before it’s too late, as the result in its article indicates Loren Thomson.
Ctrl Enter

We are in Yandex Zen
Battlefield in the digital age
Memo to mercenaries in Africa
14 comments
Information
Dear reader, to leave comments on the publication, you must to register.