11 September 2014
26
According to Thierry Maysan, the Anglo-Saxon aggression against Russia takes the form of an economic war. Moscow, in response, is developing an agricultural self-sufficiency policy. As a result, the analyst believes, the course of the next events will determine Russia's ability to maintain internal stability. 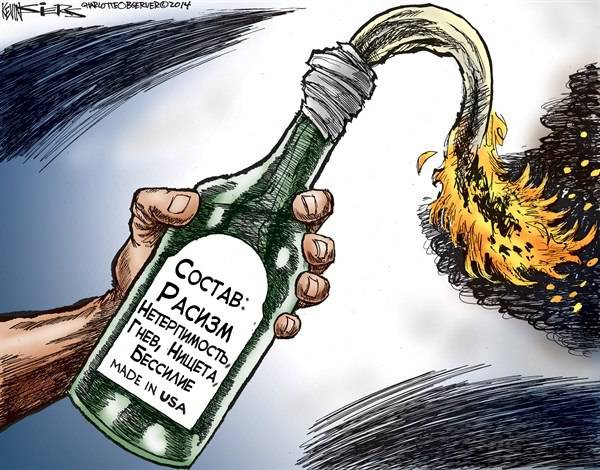 New article by Thierry Meyssan appeared where many of his previous publications appeared - on the web Voltairewhich he also founded.

According to Maysan, the struggle for world domination, led by the Anglo-Saxons (United States, United Kingdom + Israel), is today conducted in two directions: the creation of the “Greater Middle East” (attacks simultaneously on Iraq, Syria, Lebanon and Palestine) and the split of the European Union and Russia, contributes to the crisis, organized in Ukraine.

It seems to analytics that Washington set out to impose the dollar as a single currency on the gas market, a source of energy in the twenty-first century, just as it once imposed on the world petrodollars.

In the "offensive", which describes Mysan, Western media are also involved. On the one hand, they pay too little attention to the events in the Donbas, hardly covering this war. The population of Western countries knows almost nothing about the scale of hostilities, the US military presence, the number of civilian casualties, and refugees.

On the other hand, the Western media "slow to react" to events in North Africa and the Levant, either feeding them as a result of the so-called "Arab Spring", or referring to the atrocities that are inherent in the very development of civilization.

Who would argue the Anglo-Saxons? Meyssan believes that Russia.

In his opinion, at present Russia is the leading power, capable of leading the resistance to Anglo-Saxon imperialism. Russia has three instruments of influence: BRICS (a union of economic competitors who know that they cannot develop without each other); The Shanghai Cooperation Organization (giving Moscow a strategic alliance with Beijing to achieve the goal of stabilizing Central Asia); finally, the CSTO (military alliance of countries that were formerly Soviet republics).

There are already relevant projects. For example, at the BRICS summit in Fortaleza, the creation of a monetary reserve fund and the BRICS Development Bank was announced, representing an alternative to the International Monetary Fund and the World Bank, as well as the dollar settlement system as a whole.

The Anglo-Saxons are fighting in the meantime. Maysan laid out their actions on the shelves.

The Anglo-Saxons transformed the Al-Qaida terrorist network, setting it a task to prepare unrest among the Muslim peoples of Russia and China, the analyst notes.

Another milestone on the strategic path of the Anglo-Saxons is Washington’s accusation of Russia of destroying an aircraft of the company Malaysia Airlines, which was operating the MH17 flight over the Donbas (298 dead). Based on this “completely arbitrary” statement, writes Meisan, the United States forced the Europeans to declare an economic war against Russia. The Council of Europe condemned the Kremlin "without any evidence" and imposed "sanctions."

Moscow is well aware that the leaders of the countries of Europe are working "not in the interests of their people, but for the sake of the Anglo-Saxons." Therefore, Russia "bit the bit" and refrained from entering the Ukrainian war, the analyst believes.

Russia supports the rebels weapons and advice and accepts hundreds of thousands of refugees, but refuses to send troops to Ukraine. The introduction of troops, the expert believes, probably will not happen until "the overwhelming majority of Ukrainians rise against President Poroshenko."

Faced with an economic war, Moscow responded with a sanction on agricultural imports from Europe. According to Maysan, Moscow was guided by two considerations: 1) the effect will be quick; 2) BRICS countries can mitigate the consequences of European sanctions for Russia.

However, in the medium and long term, Russia is preparing for an economic war and intends to fully restore its agriculture in order to gain self-sufficiency.

Meyssan also recalls that it was not without reason that Washington appointed John Tefft, Ambassador to Russia, who became famous for the “Rose Revolution” in Georgia and a coup in Ukraine. This is a kind of message to President Putin: after all, Washington, the analyst believes, had previously hoped to “recruit” (recruit) Prime Minister Dmitry Medvedev to overthrow (Putin).

Given the alarming situation, Moscow could convince Beijing to accept India’s accession to the SCO. The decision will be announced at the summit in Dushanbe on September 12. It is necessary to put an end to the conflict between India and China that has been going on “for many centuries” and to involve them in military cooperation. Especially since Washington wants to "turn away" India from Russia.

The possible entry into the SCO also Iran can provide organizations with accurate information about the movement of jihadists and how to counter them.

The likely expansion of the SCO Meisan considers the point at which the world will turn from west to east.

However, for the formation of the eastern vector of this expansion is not enough. The analyst believes that the emerging trend should be defended militarily. The CSTO could assume this role, but China does not belong to it. Meanwhile, unlike NATO, this organization is a classic alliance in accordance with the UN Charter: each member retains the opportunity to leave its ranks, if so desired.

The analyst assumes that tensions in the world will increase in the coming weeks.

Recall that Vladimir Putin will attend the summit of the Shanghai Cooperation Organization in Dushanbe on September 11-12.

Channel "NTV" quotes the Kremlin press service: "It is assumed that during the meeting of the Council of the Heads of State of the SCO member states, the focus will be on increasing cooperation within the organization and strengthening its role in the world."

RIA News" notes that V.V. Putin will hold a series of meetings in Dushanbe with leaders of foreign countries.

Finally, at the end of the summit, Russia will take over the chairmanship in the SCO.

Undoubtedly, White House strategists will be watching all this. The cold war, which is now called "economic", does not stop for a minute.