A.Parshev: “The danger of war did not increase, but decreased” 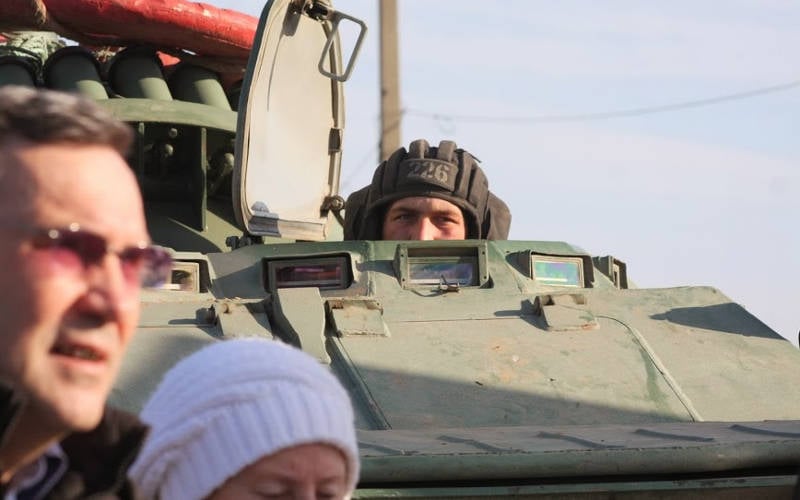 Conflict between Russia and the USA was more likely in the midst of events in Crimea, the expert believes

A well-known Russian writer and publicist, reserve colonel Andrei Parshev in an exclusive interview with KM.RU talks about the current state of Russian-American relations, pretty spoiled by the events in Crimea and Novorossiya, and gives his prediction as to how serious the conflict between the two powers can be and what form it can accept.

- The Ukrainian crisis is developing, and we all worry about the prospects - will the civil war in Ukraine not lead to a world war with the participation of Russia?

- Of course, I don’t want to look like Western journalists, who have no paragraph, “Putin wanted,” “Putin is afraid,” “Putin is going.” There are no telepaths in nature, and no one knows what Putin wanted and what he is going to do. One can only guess. At the same time, it should be understood that the management makes decisions based not only on open sources of information, but also on intelligence information about which we know nothing. Therefore, we can judge the correctness of their decisions only on indirect grounds. I think our leadership acted in February-March on the basis of the danger of a large-scale armed conflict with the United States and its satellites.

“But in the spring you said that there are no real opportunities for the war of the West against Russia ...”

- Yes, it was so in the spring and it remains so now. But here on my side was a little slyness. Our “Western partners” cannot organize a “Blitzkrieg” in Hitler’s style or even a limited one - like in Iraq - they don’t have such military groupings near the borders of Russia and cannot create them in the foreseeable time. That is, such a war, purely for military and logistical reasons, the United States now can not hold. But a local conflict with the threat of transition to the military stage was quite possible, and it was in 2014 that was possible until March. Now it is impossible, that is, we can say this: during 2014, the threat of war for us did not intensify, but weakened.

- And what signs of the danger of conflict do you mean?

- Of course, indirect. It is difficult to expect that the main players, especially the Americans, frankly spoke about their plans in the current crisis. We don’t know what our and friendly special services got for the leadership of Russia. But there are some events that need explanation, but they also explain something.

First, why was the request of the Crimean Republic to join Russia considered in such a fire order? Some believe that if this state had existed in a fully independent state for some time, not one day, and only then entered the Russian Federation, we would have avoided the current accusations of “annexing Crimea”. I think that the reason for the rush was not that someone did not think of something, and the situation required precisely quick and irreversible decisions.

The second point: in social networks there were reports of emergency measures to strengthen the defense of Crimea, I will not detail, and what is important to note - in particular, coastal defense. And this despite the fact that in Crimea there was already a good Black Sea defense system fleet, which existed under an agreement with Ukraine, and the Ukrainian funds that we got, are also something of themselves. The Ukrainian fleet does not constitute a threat of this level. So, our leadership was afraid of some more serious enemy from the sea.

And third, there were reports that the officers of all our departments, where there is military service, were not recommended to go on vacation abroad this year. The situation is unprecedented, although otherwise there are no typical signs of a threatened situation (mobilization, or at least a delay in demobilization).

- Of course, we don’t know what information came to the Russian leadership, but in your opinion, what threats were we talking about?

- Those who seized power in Ukraine this year did not skimp on threats against Russia, but apparently the most dangerous and, most importantly, real danger, was the denunciation of agreements on the deployment of the Russian fleet and troops in the Crimea. This was demanded by some of the leaders of the coup, and now ordinary Western journalists are talking about this scenario as something obvious and well-known: “Even with great displeasure, the Kremlin must respond to the transition of the only Russian naval port in warm waters military alliance, the priority of which is to counter Russia "(" Daily Telegraph ").

Most likely, the organizers of the Maidan assumed the following sequence of actions: after a coup d'etat and some stabilization of the regime (presidential elections): agreements are denounced, maybe even under the guise of an economic dispute over gas debts, and as a result, Russian ships leave Sevastopol, Russian troops leave the Crimea after a while the base goes to the Americans.

In the event of resistance to Russia, a group of NATO ships enters the Black Sea, more powerful than our fleet, and American troops are stationed at the Ukrainian military bases in the Crimea and around - in principle, this does not contradict any treaties. This has already begun in reality: “Two US Navy warships entered the Black Sea: the USS Ramage (DDG-61) missile destroyer and the Mount Whitney USS control ship with 6 marines on board. This February 600 reported "Interfax". "

Well, why did they need the Marines there, for the landing, sorry, where?

- But after all, NATO, with the exception of the Black Sea powers (Bulgaria, Romania, Turkey), cannot enter the fleets into the Black Sea due to the “Montreux Convention”?

- This convention, alas, may be circumvented. Even if Turkey - the guarantor of the convention - does not take part in the conflict - restrictions for non-Black Sea countries still provide great opportunities for our opponents: they can enter ships into the Black Sea with a displacement of up to 10 thousand tons, totally 30 thousand tons for each country, and in NATO 28!

But the main thing: the United States could strengthen Ukraine with its ships, simply changing the flag on them and keeping the key specialists on board. How did the Germans a hundred years ago, transferring your battleship to Turkey. And the US fleet is huge - it is more powerful than the hypothetical combined fleet of all other countries of the Earth. It is quite possible to single out from it, as it were, for Ukraine a certain number of missile destroyers and cruisers of the Ticonderog type, which even now constantly dangle on our shores.

But most likely this conflict would have managed without NATO at first, just as the invasion of Iraq - the United States is easier to recognize Ukraine as its “important ally” than to bother with the collective decision of the North Atlantic bloc. If necessary, a decision could be promptly taken by Congress. Could participate and England.

If a crisis of this type had erupted when the Crimea was under the control of the Ukrainian authorities, even if the putsch ones, our leadership would have to make a difficult decision. At that time, in February, our troops in the Crimea were opposed by a smaller group of the best Ukrainian troops with Western commanders ... who knew half a year ago that someone could deal with all these troops without shooting and blood?

And if there were at least small divisions of Americans on the territory of the Ukrainian military units, I don’t know if it would have been possible to do something without a military conflict. Most likely - not. American leaders lacked 2014 reaction and imagination in March, now they probably bite their elbows.

The results for us would be almost disastrous. The matter is not even in the fleet: the configuration of forces would take the form that our positions on the Black Sea would be very weak. The pressure would continue, demanding the return of Abkhazia to Georgia; and in the conditions of the superiority of the enemies at sea, it would be difficult to fight.

It is very important for Americans to show now that they are still strong and define the face of the world. That being an American ally is good. And they are constantly trying to "replay" the war in Abkhazia and South Ossetia - but for the moment it is almost impossible. Despite the image losses due to the annexation of the Crimea (does this have any significance when the United States easily breaks the treaty?), Militarily, Russia practically put the Black Sea basin under its control.

Americans actually know the military well history. It is difficult for Russia to inflict a military defeat in a direct attack on its main territory. But wars on the periphery, where Russia cannot use the full power of its ground forces, are sometimes successful for our opponents “with sea backs”, as the Crimean and Russian-Japanese wars have shown. So the plan for squeezing Russia out of the Crimea, if it was - was, in general, reasonable. Attacking the US military would hardly have dared, and escalated to nuclear weapons It was unlikely - yet this is not Russian territory at that time.

What happened in reality in March and what confused all the plans - no one in the West could see in a nightmare. Now the maximum that the Americans can threaten us with is the deployment of warehouses and several battalions in the Baltic States. It is almost safe for us at this stage, in any case it is not the "Great Army" of Napoleon.

What remains for the Americans now? Do an innocent face and deny everything. This is what they do. “We have always respected the provisions of the agreement on the deployment of the Black Sea Fleet between Ukraine and Russia. We never had any plans for Sevastopol, ”said the deputy. NATO Secretary General Vershbow during a video link following the summit of the Alliance in Wales.

But, it seems, no one in Russia accused them of anything at the official level?