10 September 2014
29
The most noticeable negative consequence of the so-called. the antiterrorist operation conducted by the new Ukrainian authorities are heavy casualties among civilians and warring parties. Nevertheless, at the present time there are prerequisites for other negative phenomena that may be fully manifested after the end of hostilities. There is reason to assume that in the foreseeable future Ukraine will be overwhelmed by a wave of crimes committed using a large number of different weapons. 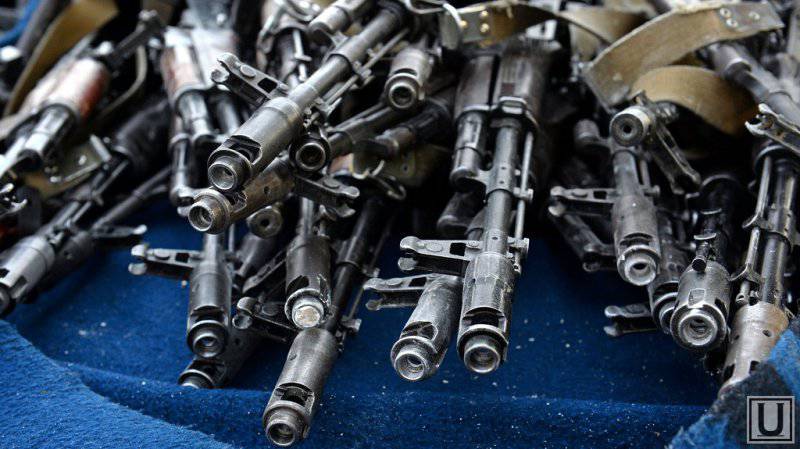 In recent months, there have been regular reports of fighters from the armed forces and the National Guard of Ukraine, who left the war zone with weapons and ammunition. Law enforcement agencies regularly report on the arrest of another suspect in theft of weapons and seizure of weapons. As follows from the reports of the Ukrainian Ministry of the Interior, the stolen weapons could get into different regions of the country. Attempts to take out small arms, grenades, etc. are known. both in eastern and western regions of Ukraine. In addition, in some cases, the suspects in the theft are declared deserters.

On the first day of September, the Ministry of Internal Affairs of Ukraine reported on the detention of two soldiers of the armed forces who had returned from the front in Kharkov. Two 1978 and 1987 men of birth had AK-74 and AKS74U assault rifles, 12 stores, almost 500 cartridges, several hand-held and one anti-tank grenade. In addition, the detainees did not have any documents confirming their right to leave the combat zone. A criminal case was initiated against two detainees in connection with 1, article 410 of the Criminal Code of Ukraine. They are suspected of stealing weapons and ammunition. They face up to eight years in prison.

Another case of detection of ammunition outside the combat zone occurred a week later. On the night of September 7, the road patrol service in Kiev stopped a passenger car, in the trunk of which ammunition was found. Law enforcement officers seized more than 200 automaton cartridges, two hand grenades with fuses, smoke bombs, flares and a bayonet. Behind the wheel of the car, which found the ammunition, was 30-year-old resident of Cherkasy region. It is reported that the ammunition was received by him from a friend. For illegal handling of weapons or ammunition (Art. 263 of the Criminal Code of Ukraine) he faces up to five years in prison.

The end of July was no less interesting from the point of view of attempts to remove weapons and ammunition from the combat zone. For example, on July 26, three servicemen were detained in Kharkiv, from whom a rocket launcher, almost 50 cartridges, a spare part for a grenade launcher, a bayonet-knife and a home-made knife were seized. The detainees went on vacation and went to the Volyn, Lviv and Chernivtsi regions. On the same day, the Luchanin was detained, in whose baggage more than 200 cartridges for the machine gun were found. On July 27, a knife and a grenade were seized from one of the fighters returning from the ATO zone.

A screaming case in which both theft of weapons and safety violations were combined, 8 July occurred in Zaporozhye. One of the National Guard fighters returned home with a “souvenir”: a reactive anti-tank grenade. When the “guardsman” left, his younger brother tried to test the weapon, but without having the necessary skills, he fired not into the window, but into his own apartment. No one was injured, but the dwelling was seriously damaged and was in need of repair. A criminal case was opened into the abduction of weapons. As reported in early July, the National Guard soldier fled.

Until recently, participants in the "anti-terrorist operation" took out weapons and ammunition on their own. A few weeks ago it became known about the emergence of a new “mechanism” of theft. According to Ukrainian media reports, at the beginning of the twentieth of August, seven parcels with six rocket launchers, 40 hand grenades and several thousand cartridges were seized in one of the post offices in Kiev. The parcels were intended for the 25-year Kievite. The sender of the parcels fought in the Donbas and tried to smuggle the stolen weapons and ammunition with the help of mail.

It is noteworthy that the resourceful military man and his friend from Kiev are not the only ones who are trying to use mail for illegal purposes. The next day after the removal of parcels in Kiev, a similar event occurred in the city of Zholkva (Lviv region). A large number of cartridges and several hand grenades were found in the package. As in the case of the "Kiev" package, the sender was a soldier who is currently at war with the militia of Novorossia.

Not only weapons and ammunition, but also military equipment are taken out of the combat zone. At the end of August, the “Prikarpatye” battalion, which suffered great losses, voluntarily left the front. Around 400, fighters with weapons and armored vehicles returned to Ivano-Frankivsk, without encountering any resistance from law enforcement or military. A little later, as a result of negotiations, the battalion agreed to surrender part of its “trophies”, and its commander was arrested and soon released on bail.

News In recent months, they are directly saying that fighters with weapons and ammunition regularly leave the “anti-terrorist operation” zone. A number of attempts to take out weapons is stopped, but a certain part of such incidents goes unnoticed and is not counted in the statistics. For obvious reasons, it is not possible to determine the exact number of automata, cartridges, grenades, etc., exported from the "ATO" zone.

The consequences of the massive theft of weapons and ammunition can be very different. There is reason to believe that such processes, under certain conditions, can lead to an increase in the level of crime, since potential offenders will be able to acquire the weapons they need relatively easily. It should be noted that illegal weapons can be acquired not only by criminals, but also by ordinary citizens who wish to obtain an effective means of self-defense.

Certain negative consequences may also affect the current Kiev authorities. Weapons used in the armed forces will be a much more effective tool for confronting the enemy in comparison with civilian hunting permitted to turn. An unstable situation in the country can lead to the emergence of new hotbeds of tension and, as a result, to armed confrontation.

Finally, under current conditions it cannot be ruled out that stolen weapons may increase the terrorist threat to neighboring countries, since Ukraine has radical organizations known for their extremely aggressive rhetoric.

Numerous abductions of weapons and ammunition can have serious consequences for Ukraine. Nevertheless, there has not been much success in combating this phenomenon. Once every few days, it is reported that new abductors are being detained; however, it is likely that such efforts by law enforcement agencies are not enough to completely stop the removal of weapons from the combat zone. The organization Ukrpochta has also taken its measures. In order to avoid sending prohibited items, mail officers must now check the contents of the packages being sent. How successful and effective such innovation will be - time will tell.