Kamchatka may remain without ground cover 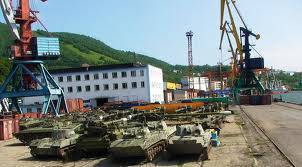 The seaport in the city of Petropavlovsk-Kamchatsky is now dilapidated. But on the pier there is a huge number of practically new ones concentrated, as they say, back in the factory lubrication of armored personnel carriers, infantry fighting vehicles, floating tanksself-propelled gun mounts. Military equipment is without combat protection, patrol and sentries. Dockers with great joy are photographed for memory, right on the armor. Armored vehicles and heavy guns are being withdrawn from the peninsula under the pretext of modernization. The base of nuclear submarines included in the Pacific fleet in Vilyuchinsk on the Kamchatka Peninsula, it remains without the necessary ground cover.


One of the officers of the General Staff, who had previously served in Kamchatka, sharply criticized such a decision: “Several hundred units of artillery systems and armored vehicles will not make the weather. But such an exposure of the ground cover of the naval naval base in Vilyuchinsk is an extremely wrong decision. And, despite the fact that now there are only a few submarines moored there, but this is a strategic reserve of the Pacific Fleet. Today, the submarine base remains uncovered from modern means of attack, either from the ground or from the air. Previously promised C-400 and reached the destination - "stuck on the road." Completely reduced previously operating anti-sabotage units. Today, the artillery component of protection is being reduced. ”

According to the official version, armored vehicles are being sent for upgrades. According to the head of the military communications department in the Kamchatka-Chukotka river and sea basin, captain of the 2 rank Andrei Zenin, the export of equipment from Kamchatka began with the departure of the T-132 tank to the “mainland” 80. The withdrawal of 150 units of various types of military equipment was planned for this summer. Half have already been sent to Vladivostok. According to A. Zenin, the old T-55 and T-62 tanks, which are in full combat readiness, will be sent next. The officer did not report the final destination of the route, citing military secrets. At the same time, he confirmed that the equipment was fully on alert and for each unit special passports were issued to the Ministry of Defense.

The military claim that the “armor” is being sent to the 206 Ussuri tank repair military plant for modernization. But, as it is known, only tanks and any other types of weapons will be repaired and improved there. However, in the same direction are sent and artillery systems "Acacia", "Hyacinth" and "Peony".

Today, the warehouses at the Ussuri tank repair plant are completely filled with a huge amount of armored vehicles and under Komsomolsk-on-Amur. For several years now, rumor has spread among Kamchatka officers that in the near future Russia will not be able to avoid a war with neighboring China. And we have practically no chance of winning, given the apparent inequality of power. As a result of military reform, which is actively carried out in the Far East of Russia, today there are no full-fledged divisions left in the region, and in order to avoid a repetition of the defeat of what happened in the distant 1941 year, the Defense Ministry is tightening equipment and artillery from all over the country and has them closer to the border a great friendly neighbor. " At the same time, according to Andrei Margiev, a Kamchatka military observer, the exported equipment is either intended to replenish its own warehouses, or the new “Viktor Bout” from the Ministry of Defense is secretly planning to sell this equipment to a country where khaki wheels are in great demand. .
Ctrl Enter

We are in Yandex Zen
Update the Russian Navy. In the gland. Part of 1
What is armed, how equipped and what equipment is in service with Russian paratroopers (photo report)
20 comments
Information
Dear reader, to leave comments on the publication, you must to register.