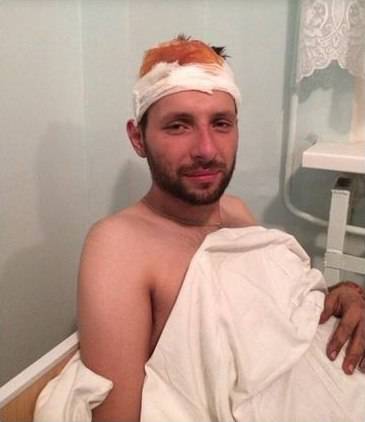 It is clear that no one believes in the peaceful outcome of the war. Peace and war are two completely different, antagonistic states. The parties are trying to solve their problems in the period of some reduction in active military operations. By analogy with the Syrian conflict, there will surely be accusations of violating the cease-fire regime, disrupting the “Minsk agreements” and so on and so forth. But we are not talking about that ...

... "In Ilovaysk, terra from the Grads were drenched, but Semen ordered us to stand to the end! He pulled a bandana and went to the hospital, leaving us, young boys, to die. ” I think that a presentation of the “folk art of veterans of the ATO” will take place soon in all underground passages in Kiev. Camouflage-dressed, unshaven men with guitars, always with flags and stripes of various volunteer battalions, will sing to the simple guitar chords about the heroism of simple patriots who have found their death in Ilovaisk, Volnovakha, Zelenopol'e, Snezhny, Mariupol, Donetsk, Luxurious, Happiness, Saur The grave. The list can be continued for a long time. There must be a box with the words "Liked helpless". Then, as part of the vocal-instrumental group should be disabled on crutches in a bandana. Well, all in body armor. Without this, just no way. Lyrics will surely appear, the blessing of rhyme lies on the surface: Saur-Tomb is a grave, Volnovakha is a blyakha, Putin is x ... lo. Let it be somewhat clumsy, but in meaning.

Any war is necessarily accompanied by people with disabilities in the crossings who ask for food and “big guns to the patriots”. And, of course, there is a mass of embittered people who wear camouflage and demand money. The Afghan wave has already become exotic. Now is the time for disabled ATO veterans. “War is a matter for the young, a remedy for wrinkles” (Victor Tsoi). The announced “campaign of patriots with the ATO to Kiev” is not clear when it comes, but the transitions must be filled in strict accordance with the spirit of the new time. Without this in any way.

“Hi Zhivy Ukraine!”, He shouted at the mine and took off straight into eternity, becoming a hero of the UPA! ” “Russian tank beat them in the chest, spat flamethrower. But they only laughed, undermining land mines, because the Maidan lived in their heads. ” Approximately such poetic primitivism.

The whole society already lives under the laws of wartime, although no one, s-ka, does not introduce martial law. Because there is a color diagram of the National Security and Defense Council, from which it follows that it is necessary to hold parliamentary elections. This time. And, secondly, it is possible to use all available types of weapons completely calmly and without martial law. Because ATO.


Further militarization of all spheres of life, without exception, including the economy, is the main direction of Ukraine on the way to European democracy. A statement about the construction of a second defensive ring around Mariupol looks very organic in this context. It is completely incomprehensible what happened to the first there, but the second is absolutely impregnable. I think, while it is warm, anti-tank ditches will be dug in all large cities. The population is very patriotic, so the weekend with a shovel in their hands will become a favorite form of recreation for the residents of megalopolises. I went to shish-kebabs, mushrooms, dug a full profile trench, quickly determined the tank-dangerous direction and covered the hedgehog. If you still paint everything in yellow-blakytny color, then the enemy will be instantly paralyzed by patriotic enthusiasm.

Of course, no one in Kiev and does not think to fulfill some of the items set forth in the "ceasefire agreement." Can you imagine the current Verkhovna Rada passing the law on the “special status of the Luhansk and Donetsk regions”? This is complete nonsense. At Fahrion instantly happen the rupture of everything, and not just the template. The trend of the current political season is “war to the bitter end”. The remaining electorate is eager for complete stripping of “Lugandon” and “Downbas” from “cotton”, “terrorists” and just the local population. Ratings Lyashko, who is called "our Conchita", is rapidly creeping up.

The resumption of active hostilities is directly related to the schedule of the election campaign. Today, they need a little respite in order to deploy work on the zombies of the population in favor of one or another political force. Then, at least, a local “victory” will be necessary in order to drag the electorate to the side of the “pro-presidential bloc”. Before winter, it is necessary to have time to lay the foundations of martial law while maintaining the appearance of the functioning of a “democratic society”. Of course, with the onset of frost, no one will eat horses. First, the horses are few. Secondly, the majority of the country's population (the one that remains) is absolutely certain that the EU is the largest gas supplier to Ukraine. In addition, hardworking Yuarovskaya miners have vowed to extract even more coal for the patriots of Ukraine.

And, of course, the construction of the great wall of Yatsenyuk will make a significant contribution to the stabilization of the election and general political situation. It is a great idea to turn Ukraine into one large filtration camp. On the one hand, there is a beautiful moat with wonderful fighting crocodiles, on the other, an economic barrier to the EU. Europe has, of course, become closer, but, well, much more expensive. About twice. Therefore, rapprochement is delayed for technical reasons. Yes, and the Parliament for some reason is in no hurry to ratify historical agreement on the european association. Now it’s fashionable to talk about joining NATO. First, they will put us a lot of precision weaponswill give wonderful limb prostheses and slightly used helicopters. Then the patriots will launch the latest American drones into the air and, playing with joysticks, destroy everything in the Donbass. Then the drones will fly to them, but this is, you see, a completely different story.

And finally: “The Muscovites-Russians of the patriot were tortured, forcing them to betray the slapstick. He didn’t say anything to them (he is singing with anguish), spat Putin in the back and hung up “maximum repost” on Facebook! ”