About murder and diplomacy 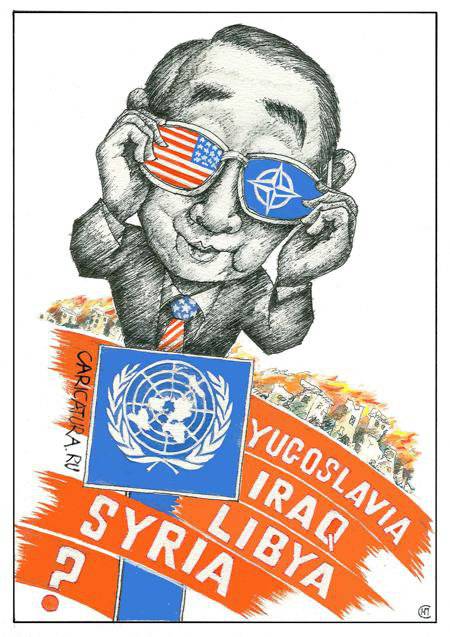 “When we came to work in Jaramana on September 6, we found the following situation: panic in the city, women cry, many people talk about leaving sooner,” a local resident told about the day when “opposition” militants attacks in the suburb of Damascus Jobar, tried to make a breakthrough. At the same time, the so-called “freedom fighters” intended to enter the city of Jaraman and the village of Duweil.

For almost four years, the world tried to convince that in Syria there are some "rebels" who want to "liberate the people from the regime." This is how the people meet only rumors about the invasion of the liberators!

“The population of Jaramana has recently quadrupled. Refugees from areas occupied by terrorists arrived in the city. Now there is not enough transport; there are a huge number of bus routes, ”the resident of the city continues.

Indeed, many people who came to the city to seek shelter, already felt in full the “charm of democracy” - they fled from atrocities, arson houses, from mass cruel executions. With those who did not escape from those places, relatives long ago lost all contact and lost hope of seeing them alive. And that same Dzharamana, where hundreds of thousands of people took refuge, repeatedly became the victim of terrorist attacks and repeatedly - mortar attacks. And now rumors that the militants could break through did not arise from scratch - they were preceded by mortar shelling from the “opposition”.

It is necessary to emphasize in particular - in the province of Damascus there are no militants of the “Islamic State” yet, about which the West insists on fighting, somehow singling out this terrorist organization from a number of other armed gangs operating in Syria.

Fortunately, the Syrian army stopped the militants. However, some Arab TV channels supporting terrorists managed to report on the "success of the opposition" in the area. The governor of the province of Damascus, Hussein Makhlyuf, visited Jaramana and addressed the people, saying that the situation was calm, the people were under the protection of the military and the people's self-defense forces.

Unfortunately, in Damascus and in other parts of Syria, people continue to die and get injured at the hands of terrorists. On the same day, September 6, one of the militant projectiles hit the capital Al-Shagur quarter. One person was seriously injured. Two more residents of Damascus suffered from a similar crime in the Zablatani quarter. In the Bab Sharqi quarter, a mine released by terrorists led to a fire in a clothing depot, fortunately, no one was hurt, but there was enormous damage.

In the north of the country in the province of Aleppo in the quarter of Al-Khaldi due to mortar shelling, one person was killed and two were injured.

7 September in the city center on An-Najme square two more people suffered from the shelling. And in the province of Hama, the villages of Azizia and Bakhsa in the Scalbia region fell victim to a mortar attack - two people were killed, nine were injured.

In the province of Homs in the region of Guta, law enforcement agencies detained a car in which terrorists were transporting a cargo consisting of narcotic tablets "Keptagon." This drug is given to the militants so that they are violent and fierce in battle. That's where the whole imaginary “heroism of the Syrian opposition” comes from!

Once again, in these areas, not the “Islamic State” acts, but the so-called “moderate” states.

As for the "Islamic state", then it was "distinguished" by another cruelty. The militants of this terrorist organization beheaded the Belgian Islamic preacher Elias Azaia. He came to Syria with a noble purpose: to try to talk to young people from Belgium who were recruited by jihadists, and to persuade them to return home.

Meanwhile, in France, journalists, who miraculously escaped from the captivity of the radical militants in Syria, spoke about the atrocities that were accomplished by the "Brussels shooter" Mehdi Nemmush. This criminal is known for opening shooting in the Jewish Museum of Brussels in May of this year, killing four people. Previously, he fought in Syria on the side of the "opposition", where he joined the "Islamic State". So many other murderers and sadists began their bloody way - at first they went “to fight the regime,” as the West even encouraged this matter, and then entered into the organization that all parties now recognize as a great threat to the whole world.

These four miracles managed to break free. Nicolas Enen described his jailer as a “perverted sadist”: “In the evenings he came to the captives and sang songs or recited episodes of the famous French TV show on the theme of“ Enter the Accused ”, which he himself once dreamed of becoming. When Nemmush didn't sing, he tortured. ”

And in the next cell, according to the journalist, captive Syrians were tortured. It could last all night, until the morning prayer.

In addition, the same terrorist could be among those who guarded the American journalist James Fowley, whose execution shocked the whole world.

The UN Security Council adopted a statement condemning the murder of Fowley's colleague, journalist Stephen Sotloff, who was also beheaded by Islamists. “This crime serves as a grim reminder of all the dangers that journalists face every day in Syria. It has once again demonstrated the cruelty of the IS group, which will be responsible for the 1000 atrocities against the Syrian and Iraqi people, ”the document says.

Earlier, in August, the UN Security Council had already received almost the same statement regarding the execution of Fowley. But after that, the Americans only stepped up their anti-Syrian rhetoric, instead of actually ending support for the terrorists.

The United States submitted to the UN Security Council its draft resolution on foreign fighters. In addition, Washington proposes to hold a special meeting on this issue in the framework of the UN General Assembly. The support of such initiatives was stated by Deputy Foreign Minister of Russia Gennady Gatilov: “This problem must be fought with all the available resources of the international community.”

However, the diplomat recalled that Russia repeatedly warned about the danger of supporting terrorists: “Our Western partners were puzzled with only one goal - to overthrow the“ regime ”and used for this and the channels of help to extremists ... But now they saw that the problem is turning differently. The Islamic State and radical extremists are already threatening the entire region. ”

Meanwhile, the recently appointed UN special envoy to the SAR, Stephen de Mistura, is going to make an official visit to Damascus, replacing Lakhdar Brahimi at his post. Mistura wants to discuss with the leadership of Syria the possibility of resuming negotiations between the government and the so-called “National Coalition of Opposition and Revolutionary Forces”.

If among these "opposition and revolutionary forces" there really are at least a few sensible people, then they should stop the senseless struggle with the leadership of Syria, and begin to cooperate with it against the "Islamic state". For this, those politicians in the West who are talking about their intention to fight terrorism are obliged to appeal to the “moderate opposition” (if, in their opinion, it exists) with such a call. But so far no such call has been heard. Therefore, in the sincerity of these "fighters against terrorism", well-founded doubts arise.