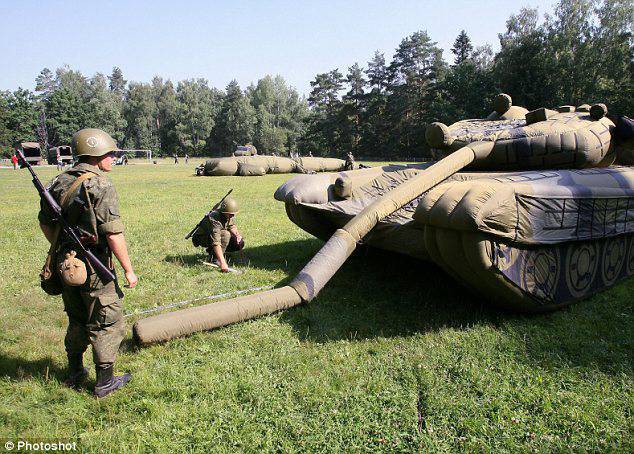 According to Oleg Taksheev, head of the state orders department at NPP RusBal, in August of this year, the company plans to test completely new inflatable mock-ups that simulate anti-aircraft missile systems and complement existing ones tanks and airplanes that are used today in the troops. Based on the results of field tests, the Ministry of Defense of the Russian Federation is ready to include these products in the list of the State Defense Order for 2012.

Among the products of the enterprise, which is mass-produced, Oleg Taksheev called mock-ups that mimic the LZK-1 anti-aircraft complex (this “balloon” represents C-300). Earlier it was reported that during the 2011 year, RusBal would supply the Russian Defense Ministry with a batch of inflatable (rubber) mock fighters and tanks. The fact that the Russian armed forces will also have inflatable missile systems, the Defense Ministry reported in the summer of the year 2010. The development of simulation models of air defense missile systems and rocket launchers intended for the Russian Ground Forces was planned to be completed by the end of 2011 of the year or as a deadline to the beginning of 2012 of the year. Moreover, the question was about the mock-ups not only of new systems, but also advanced air defense systems and rocket technology, which have long been taken to supply, for example, anti-aircraft missile systems C-300.

Some experts argue that, given the very simple technology and the low complexity of making layouts, they are quite affordable to do with sewing technology in other enterprises. Each of the pneumatic mock-ups of military equipment consists of a shell, thermal and radar simulators, a power unit, a fan, etc. The inflatable mock-ups may also include rigid frame parts. All models are quite easily transported by air, road and sea transport without any restrictions. At the same time, the established price of one inflatable layout does not exceed 1-2% of the original cost.

Despite the assurances of manufacturers of rubber models that their products can provide real assistance to the armed forces, in the West they are openly making fun of these innovations. So, in particular, the British daily newspaper The Daily Mail mockingly mocked the so-called "rubber power" of the Russian armed forces, indicating that its arsenals were filled with all kinds of inflatable tanks and rockets. In Russia, such statements are answered that rubber models do not occupy even 1% in the domestic Armed Forces of the amount of real military equipment. Such a false weapon exists in all developed armies of the world; the British army is not an exception. As a rule, money for the manufacture of models of aircraft, tanks, rockets and even submarines are included in the annual budgets.

In this case, it is appropriate to recall the NATO bombing of Yugoslavia in the late 90-s, in which the British Air Force planes took an active part. Obviously, the journalists of the British edition have forgotten how their pilots bravely destroyed inflatable tanks and airplanes, which cost several times less, with missiles worth hundreds of thousands of dollars, taking them for real ones. As information: all the dummies used by the Yugoslav army were Russian-made. And later, British generals sent submissions to the medals and orders of their brave pilots, who allegedly attacked the Yugoslav positions with high precision and destroyed hundreds of aircraft, cannons, missiles and tanks. But in the end it was a beautifully presented lie. Serbs then called them loud government awards "For the victory over the Russian condoms."

Alexander Talanov, General Director of RusBal NPP, proudly talks about the products of the company, in particular, he points out that “inflatable equipment recreates the radar range, near infrared and thermal range, similar to night-vision devices, with this in mind, the dummies look on enemy surveillance devices like real weapons. At the same time, it is much easier to disperse an inflatable army into combat positions than a real one, for example, a tank mockup is literally inflated in four minutes, and a missile system - in five. ”

The same edition of The Daily Mail sarcastically notes: “Russia only brags around the world in its advanced weapon systems.” One gets the impression that British journalists do not read Russian newspapers, in which almost every day they tell about significant problems in the Russian armed forces and about the new State rearmament program designed for the period up to 2020 of the year. Including the Russian Air Force strategic bombers, who periodically visit neutral waters off the coast of Great Britain. And then the Royal Air Force in a panic flies to meet them, and the British media are beginning to scream that “the Russian bear shows its fangs again”. So is it still inflatable or real?

There are critics of the use of pneumatic models of military equipment in Russia. So, in particular, some military experts argue that the program of arming the domestic army with pneumatic models of aircraft and armored vehicles does not justify itself to the extent that it was originally planned. Huge money that is spent today and will be spent on rubber tanks and missiles in the future, is flowing away in a torrent.

The problem is that the inflatable equipment cannot fully reproduce all the properties of a real combat vehicle. Yes, and the current means of detection quite easily distinguish the materials used to manufacture such equipment from the metal. But in real combat conditions, such models generally become meaningless, experts say.

Despite the statements of experts, the Ministry of Defense decided to supply the army about 100 models of various military equipment annually. As previously reported, the total number of different inflatable equipment will be 800 units. With what zeal the Ministry of Defense of Russia seeks to fill the army with rubber mock-ups of military equipment will not be for anyone news, if a message appears on the adoption of inflatable infantrymen and such generals.

We are in Yandex Zen
Innovation Day of the Southern Military District: layouts and models
2010 Results of the Year (Part I)
6 comments
Information
Dear reader, to leave comments on the publication, you must to register.