9 September 2014
84
With 2007, Russia and India are working together on the FGFA (Fifth-Generation Fighting Aircraft) fighter project. The purpose of this work is to create an export version of the T-50 aircraft, taking into account the wishes of the Indian military. Last winter, Indian media reported on some of the features of the FGFA project. It was argued that the Indian Air Force had some complaints about the project and was concerned that a number of the characteristics of the prospective fighter did not meet their requirements. In early September, similar information reappeared. According to Jane's, the Indian Air Force is again making claims to the joint Russian-Indian project. 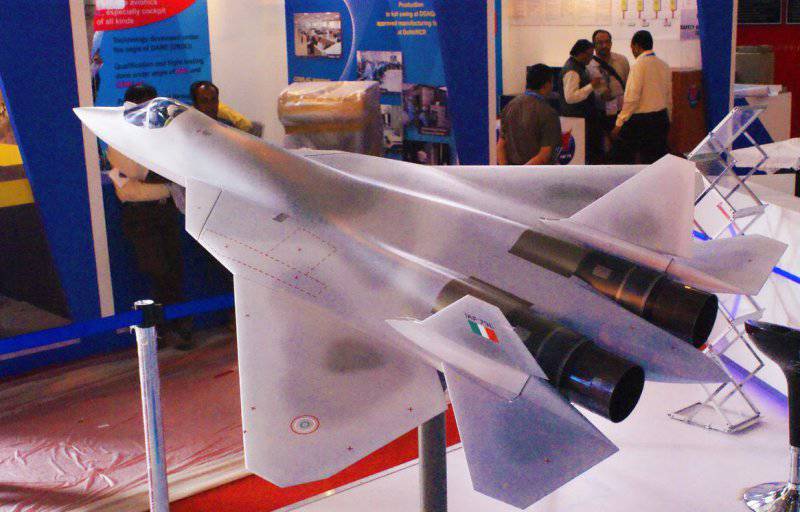 Jane's publication, citing sources in the Indian Ministry of Defense, reports that a number of features of the joint project do not suit the military and is the cause of the claims. It is argued that the requirements of the customer in the face of the Indian Air Force are not satisfied with the AL-41F1 turbojet engines, the airborne radar, the level of stealth and the proposed weapon suspension systems. In addition, the Indian military is once again concerned about the delayed development of the project. It should be noted, it is not yet known what exactly the parameters of the promising fighter are not satisfied with the Indian Air Force. In addition, Jane's reporters failed to receive official comments from the Indian Air Force and HAL.

Previous claims by the Indian side were expressed at the end of this spring and related to the timing and cost of the project. The Russian aircraft manufacturers responded to these claims that the work is being carried out without serious difficulties, and all the existing problems are solved as soon as possible. Later, information appeared about new claims to a promising project: the Indian military spoke negatively about the specifics of operating the FGFA aircraft, as well as reducing India’s participation and refusing to provide some documentation. In addition, it was alleged that Russian aircraft manufacturers still have not informed their Indian colleagues about the reasons for the ignition of the experienced T-50 fighter in June of this year.

Of particular concern to the Indian military is the rising cost of the program. It was originally planned that the development of the FGFA fighter would cost India approximately 10-11 billions of US dollars. Since 2007, the estimated project cost for the Indian side has increased by about one billion. One of the consequences of this was a change in plans regarding the amount of equipment planned for the order. According to the latest plans, it is not the fifth-generation 220 fighters, as previously assumed, that will be acquired, but no more than 130-150. In addition, the possibility of abandoning the 45-50 training FGFA with a double cabin is being considered.

The Indian Ministry of Defense is concerned about the increased cost of the project and the insufficient characteristics of the aircraft being developed. At the same time, Indian aircraft manufacturers express their concern. The fact is that at the beginning of the project, in 2007, Hindustan Aeronautics Ltd. (HAL) pledged to perform 25% of all project work. According to the latest data, the share of HAL has now decreased to 13%. Thus, Indian enterprises will have to supply only some radio-electronic systems, and almost all the main components of the equipment will be produced by the Russian industry. This feature of the project, as well as the possibility of further reducing the share of Indian participation, is causing concern and complaints from HAL.

Jane's reports that the Indian side, which had previously complained about the various features of the joint project, has already received clarifications from Russian colleagues. So, it is known that the engines AL-41F1, which became one of the objects of claims, are a temporary solution and in the future will give way to new engines with higher performance. The new engine for the FGFA fighter is already being developed, and the existing AL-41F1 will be used only at the stage of the first tests of the aircraft. As for the radar with an active phased antenna array, its development and improvement continues. By the time of the start of mass production of aircraft characteristics of the system will be brought to the desired level.

As already mentioned, the Indian military is not the first time expressing their claims to the project of a promising fighter. Late last year and this spring, the Indian Air Force has already discussed the compliance of the FGFA project with the expectations of the military. From these discussions, certain conclusions were made, which were recently reiterated by the source of Jane's publication in the military department of India. At the moment, the FGFA project has several controversial features that do not allow starting customers of the new fighter to quietly fulfill their obligations under the existing contract and wait for the appearance of the machine.

The concern of the command of the Indian Air Force is not without reason. Indeed, the FGFA project is currently at its earliest stages, has a lot of “childhood diseases” and therefore requires a lot of effort, time and money. The first test flight of the fifth generation fighter will take place no earlier than the end of the current decade, which to some extent may indicate the degree of development of the project at a given point in time.

As the project develops and the components of the aircraft planned to be used are improved, all concerns for the Indian side will have to disappear, in addition to the likely increase in the project cost. The development of a fifth-generation fighter, even on the basis of an existing machine, is an extremely complex and expensive task, the solution of which requires serious funding.

It is noteworthy that the latest statements by officials and unnamed sources about claims to the FGFA project may have a political motive. With the help of Russian aircraft manufacturers, India in recent years has been able to modernize its aviation industry. The latter, in turn, is already developing its own fifth-generation fighter project. According to recent reports, an experienced AMCA fighter (Advanced Medium Combat Aircraft - "Perspective Medium Combat Aircraft") should first take off in the early twenties. In terms of a number of characteristics, the AMCA is noticeably inferior to the T-50 and FGFA, but its “origin” as a machine created by Indian engineers can have a serious impact on the final decision of the military.

Another potential competitor to the Russian-Indian FGFA is the American Lockheed Martin F-35 Lightning II fighter. India has already received a formal offer from the United States regarding the possible sale of this type of aircraft. It should be noted that the F-35 is not yet ready to supply the Indian Air Force and in terms of time can be considered a direct competitor to both FGFA and AMCA.

In the context of updating the fleet of the Indian Air Force and the FGFA project, a recent tender for the supply of fighters is sometimes mentioned, the winner of which was the French-made Dassault Rafale aircraft. In recent times, there have been repeated proposals to sign a contract for the supply of 126 Rafale and refuse to develop a joint Russian-Indian project. However, this sentence is meaningless because of the different classes and levels of Rafale and FGFA. In this case, the French technology can have a positive impact on the state of the Air Force over the next 10-15 years.

Regardless of the reasons for regularly reminding about the existing shortcomings of the FGFA project, the development of this aircraft is of great interest to India. As a result of the successful completion of this project, the Indian Air Force in the future will receive a modern fighter of the fifth generation with high performance. In addition, India does not buy the finished aircraft, but takes part in its development, having the opportunity to influence the appearance and technical characteristics. Finally, the planned deployment of the construction of serial FGFAs at HAL's production facilities will help Indian specialists to master new technologies.

However, recently the Indian military with an enviable regularity remind them of their claims to the FGFA project, and the list of these claims is almost not updated. The exact reasons for this are unknown, but such statements are unlikely to help to quickly deal with all the existing problems and complete the creation of a new aircraft. It should not be forgotten that it is India that is most interested in the successful completion of the FGFA project.