Ukraine, in the area of ​​relations with NATO, is on the path of Serbia 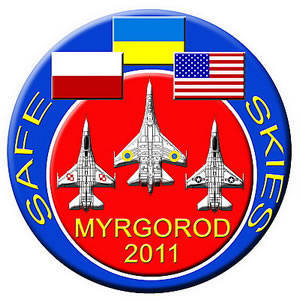 Ukraine since the “pro-Russian” Viktor Yanukovych is rapidly - in comparison with even Mr. Yushchenko’s presidency - developing military cooperation with the North Atlantic Alliance. So, Kiev made such that it is very unpleasant to realize: at the airfield of Mirgorod, that in Poltava region, combat aircraft of the USA and Poland flew in order to conduct the exercises "Safe Sky - 2011" together with the Ukrainian Air Force, the exercises began on July 18. "This is the first in stories The Armed Forces of Ukraine are an international doctrine of military aviators on the territory of our country, ”said Vasily Nikiforov, Acting Commander of the Ukrainian Air Force.


According to the press service of the Ministry of Defense of Ukraine: these exercises will "contribute to strengthening sister relations and achieving interoperability between military units and air forces of Ukraine, the United States and Poland." It is clear that Moscow is also developing its relations with NATO, but it is painful to realize that the ideological heirs of Hitler are treading on the Russian land. But NATO hawks have become “sisterhoods” for the military of Ukraine.

The official goal of the Safe Sky - 2011 exercises is to prepare for the 2012 football championship of the year, which will be held simultaneously in Poland and Ukraine, and the air forces of three countries will protect the airspace from the intrigues of “international terrorism”. 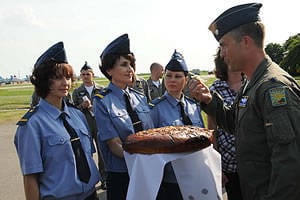 Even from the point of view of rationalism, it is not clear why Kiev invited American aircraft to protect the airspace - the Russian Air Force is not overseas, but much closer. The point here is clearly in politics, this step is completely clear from the point of view of the pro-American course of the Ukrainian elite. Kiev clearly intensified its military cooperation with the North Atlantic bloc, along with the exercises "Safe Sky - 2011", Admiral James Stavridis, commander-in-chief of the NATO Combined Forces in Europe, arrived in Kiev at the head of the military delegation. As UKRINFORM reported, the main purpose of the 3-day official visit of the NATO military delegation to Ukraine is to discuss the current state and prospects for the development of cooperation between the Ukrainian Armed Forces and the North Atlantic Alliance, as well as possible prospects for expanding cooperation. Last Wednesday, Admiral James Stavridis visited the base of the Ukrainian Navy in Sevastopol and was visited by the BOSK Kostyantin Olshansky and the frigate Getman Sagaidachny. How quickly the views of people are changing - the highest military rank of the enemy bloc (only amateurs to listen to Posner and Mlechin can believe in the verbal husk about the radically changed situation) in the city of Russian naval glory!

This was after last year, after the failure of Yushchenko’s strategy of joining NATO, the Verkhovna Rada adopted non-aligned status of the state, and the administration of President Yanukovych set out to cooperate with all partner states without membership in military and defense alliances. The situation changed when NATO Secretary General Anders Fogh Rasmussen visited Kiev in February 2011. After this, various military missions of the bloc again came to Ukraine again, and the Ukrainian military again began to conduct regular exercises with NATO members. Even under Yushchenko, the opposition often blocked plans for joint exercises, currently the Party of Regions sanctions everything, even the most ambitious ones.

Thus, in June, within the framework of the Sea Breeze-2011 exercises, the cruiser of the US Navy Monterey arrived in Odessa, which is a regional link of the US missile defense system in Europe. This event then caused a considerable scandal, the Foreign Ministry of the Russian Federation even made quite a dramatic statement about this: "We will not disregard the appearance of elements of the strategic infrastructure of the United States in close proximity to our borders and we will perceive such steps as a threat to our security."

By the arrival of the delegation of Admiral Stavridis to Ukraine, Ambassador Dirk Brengelmann (Assistant Secretary General of NATO) published a “message” in the Ukrainian media. It summed up the 20-year cooperation between NATO and Ukraine, and spoke about the prospects for its development. Dirk Brengelmann believes that at present "more than ever, there are powerful reasons for developing a partnership between NATO and Ukraine." Apparently, according to the leadership of NATO, Ukraine has already “matured” for further integration into the field of the Alliance. He further reports that it is necessary to bring the size and structure of the Ukrainian army in accordance with NATO standards in order to enhance the interoperability of the Ukrainian troops with the troops of the Alliance.

The Ukrainian Chief of the General Staff, Grigory Pedchenko, when meeting with James Stavridis, said that the Ukrainian military had completed the development of a Concept for the further reform and development of the army for the period up to the 2017 year. Admiral Stavridis approved the plans of the General Staff of Ukraine. Their essence seems to be in what we have seen in Serbia - further “optimization”, reduction in the number of weapons, the number of units, transformation into a “toy army” capable only for “joint maneuvers” with “twin cities” from NATO.

We are in Yandex Zen
Situational analysis of the death of the MH17 flight (Malaysian Boeing 777), made on the basis of engineering analysis from 15.08.2014
Results of the week. “You are already indebted to the sea: neither the bottom nor the coast”
115 comments
Information
Dear reader, to leave comments on the publication, you must to register.