8 September 2014
14
Everything new is well forgotten old. Another proof of this is the system of military training, which was introduced by the domestic Ministry of Defense in civilian universities of the country. The system is aimed at preparing a high-quality reserve for the Russian army, the need for which President Vladimir Putin mentioned in his message in December 2013.

At first glance, it may seem that the innovations are obvious: from 1 in September of this year, all students of 63 from Russian universities (as many higher educational institutions of the Russian Federation received the right to conduct training for reservists) will be able to receive a military accounting specialty, which is called civil nature. Training by the Ministry of Defense in collaboration with the Ministry of Education and Science will be carried out in stages. 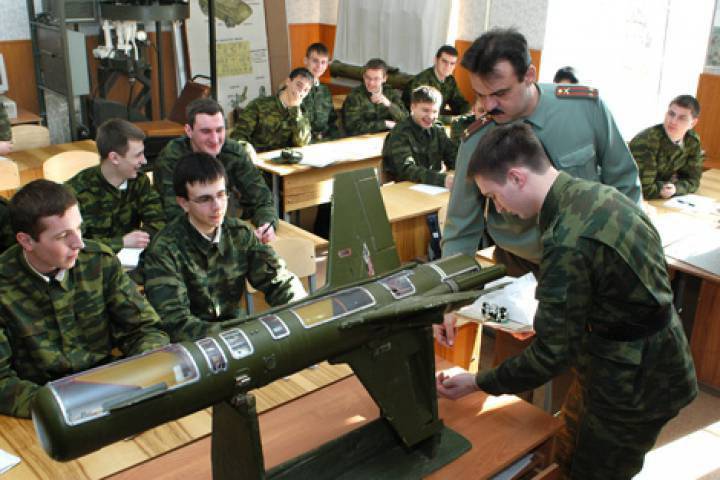 The first stage is to enable interested students of civilian higher educational institutions to undergo theoretical training within the framework of a particular university in specially created inter-university centers. At the same time, the general training period at the IWCC (Interuniversity Training Center) will be between one and a half and two and a half years (1,5 of the year - for training stock soldiers (sailors), 2 of the year - for training reserve sergeants, 2,5 of the year - for training reserve officers). At the second stage, students expect full-fledged military training on the basis of higher military educational institutions and military units. In this case, the minimum time spent by a student at a military gathering should be three months. For the time being, the Ministry of Defense designates a three-month practical training period for reservists as a term that applies to all categories (soldiers, sergeants, officers).

A closer look at such a training system can be said that it has much in common with the Soviet version of training. This is a unique mixture of the classical Soviet educational system in the format of military departments and training with the involvement of DOSAAF.

If we talk about the scale of training of reservists for new programs, then so far these scales are far from impressive. Only about 15 of thousands of Russian students of civilian higher education institutions expressed a desire to get shoulder straps and become a member of the reserve immediately after graduation from their educational institution. It is worth recalling that after the presidential address, the officials of the Ministry of Defense said that they plan to recruit about 53 thousands of students to study at various MASs as part of the preparation of a professional reserve. It turns out that the plan is implemented less than a third. With what it can be connected?

There are several reasons. First, not all Russian students understand the principles by which such training will be conducted. In this case, the simple desire to better understand how the Ministry of Defense and the Ministry of Education and Science implement everything is working out - to understand it on someone else's experience. And, it is quite possible that if the system shows itself to be truly efficient, if military training is not conducted to the detriment of civilian and vice versa, then next year the number of students who are ready to become reservists will increase significantly. Therefore, the issue of organization and balanced financing is one of the key issues here.

Secondly, it is influenced by the fact that intercollegiate educational centers, in which students will receive knowledge in the framework of the selected MAS, are not enough. They are simply not created enough to give the opportunity to study the number of students announced by the main military department at the beginning of this year. According to the First Deputy Chief Organizational-Mobilization Directorate of the General Staff of the Armed Forces of the Russian Federation, Major-General Yevgeny Burdinsky, 37 training centers have been established, after completing the course, on the basis of which students will receive the rank of lieutenant. In this case, we are talking about those universities that have their own military departments (there are about seventy universities with a military department in the Russian Federation). That is, all these 37 training centers are unlikely to be used at the first stage of innovation for training reserve and non-commissioned reservists.

That is why a number of experts express the opinion that the DOSAAF system can also be used to empower the process of preparing students for military specialties. Moreover, quite recently, the Defense Ministry received an initiative to transfer DOSAAF to improve the quality of training young people for military equipment that is not involved in the troops, but which is still too early to be written off and sent to Chermet.

If the program is implemented without significant difficulties, then next year the main military department plans to create an IAD — an organized military reserve. If it is possible to put it this way, this is the most mobile and demanded part of reservists who have undergone (undergoing) training on the principle indicated above. The total number of IAD should be about five thousand people. How does the Ministry of Defense plan to use these reservists? First, they will be called for annual military training, which will last 30 days. Secondly, IAD reservists will be obliged to take classes to increase the level of existing military knowledge and skills. Such obligations will be assumed by reservists themselves when signing a contract with the Ministry of Defense, in which the monetary allowance will also be written.

It seems that if an IAD is formed, then it is unlikely that there will be employees of private structures (companies, organizations, etc.), because not every owner of an JSC or LLC will be ready for his employee to leave his place of work for the first call the Ministry of Defense. In the USSR, for obvious reasons, calling the reservist for fees without any special problems with the employer was much easier. But before the Israeli experience of Russia is still far away. Perhaps, we will come to such an experience with time, but in order to learn from the experience, the announcements from the Ministry of Defense alone are not enough. It will have to work, as they say, in several social areas.