Why does Cuba not rebel? 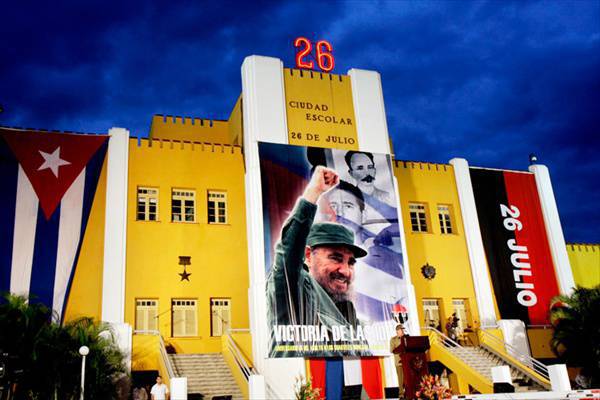 For more than half a century in the Western Hemisphere, one of the few countries that have chosen socialism as the development of their social system, Cuba, continues to exist peacefully. Under the Soviet Union, it is clear that many would argue that power on a small island of freedom is maintained only through the assistance of Soviet economic and military power, but today the Soviet Union is no longer on the world map, and the socialist country, which took place as a state thanks to the USSR, is still It continues to exist, however, and not only exist, but also improve. Many people do not understand the reason for this vitality?

In the 1991 year, with the collapse of the USSR, a new stage of formation began in Cuba, at which the island nation could only rely on itself. Realizing later that there was no one else to expect help from anyone, the Cuban government obviously chose its own path, which differs from the development paths followed by China, Vietnam, North Korea and other countries of the socialist camp.

The country returned again during the mid-50s, that is, at a time when the main basis of the economy was tourism. The most interested in the development of the tourist sector of the economy of Cuba were entrepreneurs of Germany, Canada, Spain, Italy and France. It is from these states that the main flows of tourist recreation lovers go to Cuba today, tourism is becoming the leading sector of the country's economy at the present stage.

Leading revolutionaries, knowing full well that without radical and national reforms, the country was in danger of collapse, they began to put into life plans for reforming their socio-economic structure immediately, which in this case is interesting because the country's leadership took all its steps to reform the national economy. implemented and continues to implement publicly, with their wide consecration in the local media, the many hours of television appearances by Fidel and Raul Castro broadcast to the whole country confirm this. All these steps have led to the fact that the level of confidence of ordinary Cubans in their government has increased significantly. Every Cuban understands that the government acts strictly in their interests and therefore fully supports every decision made.

To this must be added the excellent and in contrast to the Russian really free medicine, education and other social benefits, which, as before, are inherent in the Cuban socialism system, as a result, a sense of real social justice and security and confidence in the government remove even the possibility of a threat of social explosions. In this case, the attitude of the United States looks very interesting, which, as a rule, organize and sponsor color revolutions in various parts of the world, and right next to it, why it is still truly a socialist country and not only tolerates it, but even indirectly sponsors it despite the current embargo regime, in particular, hundreds of thousands of Cubans who emigrated to the US regularly send millions of dollars as remittances to their relatives, and the Americans themselves ovolno frequent visitors to Cuba as tourists.

But the Cuban economy is not only tourism, but also the most popular cigars all over the world, as well as sugar cane, which is supplied to 57 countries of the world, including Russia and most of the republics of the former USSR, as a raw material for making sugar.

Of course, it can be argued that socialism rests only on tyranny, but the Cubans prove the opposite. One may argue that the people of Cuba are leaving their homeland on rubber boats and trying to get to the American coast and indicate that people are starving or there are no products in the required quantity in stores, all this can be said, since this is true, but this is true but not true. Unlike our people, ordinary Cubans have faith in the government, faith in the future and, most importantly, faith in life.

We are in Yandex Zen
Republic of Korea military facilities on Google earth satellite imagery
American Guantanamo Naval Base in Cuba
4 comments
Information
Dear reader, to leave comments on the publication, you must to register.