8 September 2014
20
More than 30 years lived with his family in Moscow, where I was transferred from Leningrad by the decision of the government of the country to guide the newly created Main Directorate of one of the nine defense ministries. When creating the weapon system in Moscow before this transfer, I often visited various ranges of our country, test centers and military units located in the Far North and in other countries.

In my youth, when I was a cadet, I was fond of hunting and fishing, constantly in moments of calm I admired nature, trying to remember for a long time the amazingly beautiful pictures of our north and the Volga delta. But that picture that I saw on Naval Day fleet on the embankment of the Smolenka River in St. Petersburg, very struck me.

The granddaughter Nastya came to visit us from Moscow to see St. Petersburg, the large and wide Neva River, build bridges, visit the Hermitage and the Russian Museum, take a walk in the Summer Garden, and in the evening admire Nevsky Prospect. Observing the bridges, I spent my granddaughter to the sphinxes, which are installed on the Neva embankment near the Academy of Arts. Here she also admired the ancient griffins, which, according to the established tradition in the city, had to be stroked on the head - then the wishes come true. A few days later, when we drove along Nevsky Prospect, I showed her the house where our family lived before World War II and where I was born. She was very struck by the fact that at night on Malaya Konyushennaya Street, young people danced to the music of the orchestra. She did not see this in Moscow. The surprise of her granddaughter knew no bounds; everything made her delight. When we looked at the structure of the warships on the Neva and when I talked about which systems for each of them were created with my participation, my granddaughter, rising on tiptoes, hugged me. Apparently, she was proud of our homeland.

We arrived home on Vasilyevsky Island through the Tuchkov bridge, which was bred at night for just one hour to pass the bulk carrier. We now live in the immediate vicinity of the promenade, a little in the back of the yard. In the morning, I suggested walking on the embankment of the Smolenka River. There were practically no people on the embankment. Many went to the city center for festivities and concerts. The flow in the river after the construction of the dam in the Gulf of Finland became very quiet, and the depth decreased. I remember earlier, when we just moved to this area from Nevsky Prospekt, on the Smolenka River, even from the time the fleet was reduced, a patrol ship was in the joke. Yes, such a period was in the development of our country. At one time, they reduced the fleet, in another period, they reduced Aviation. And more recently, we did both, but we survived this too. So at the time when we just moved to this area, Smolenka was a clean river, children and adults bathed in it. People came out of the new houses in swimming trunks and swimsuits, some of them went swimming, dressing in bathrobes. But it was a luxury that not everyone could afford. One could also swim in the bay, and on the ring of the trolleybus of route 10 there was a city beach. Now this left only memories.

I told my granddaughter about the life of our generation, while we were quietly walking along the embankment. Suddenly my attention was attracted by an unusual picture. A gray duck with nine ducklings was swimming along the river, turning over with paws, this company was not afraid of anyone and did not pay attention to anyone. The duck and ducklings often put their heads in the water, looking for something there. Two small terns ran through the river at a height of about eight meters. Flying to the bridge over the river, it is in the area of ​​Korablestroiteley Street, terns turned around and again swept over the water surface of the river. Sometimes they dived from a height, then jumped out of the water, and everything repeated. The granddaughter, wide-eyed, looked at this sight.

On the left bank of the river, on a wide granite parapet, we noticed a sitting gray seagull of impressive size, and a crow next to it. 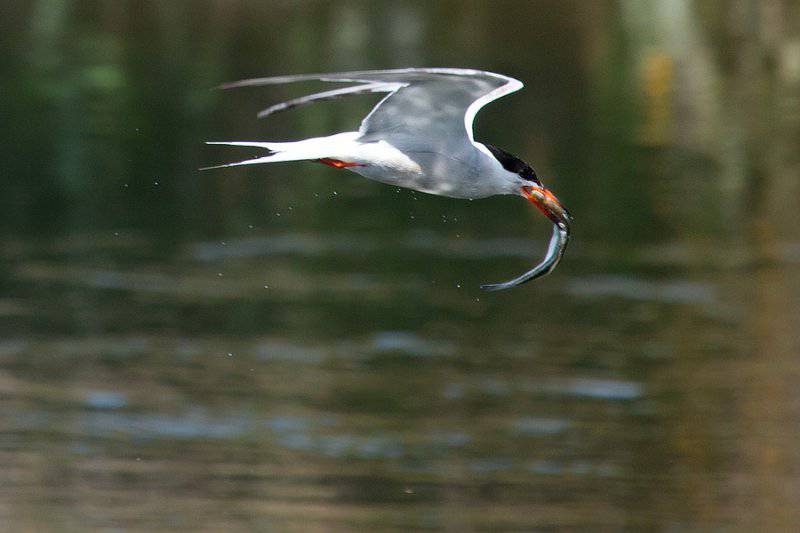 An unusual sight. Suddenly the gull flapped its wings and rose into the air, immediately the crow repeated this maneuver. The birds, at a distance of no more than four meters from each other, flew in a large arc and again sat down on the granite parapet in the same place. I asked my granddaughter to look at the opposite shore and pay attention to the seagull and the crow. And the crow at that moment began to approach the gull and caw softly, stretching its neck. From this, her posture became ridiculous, and at the same time we laughed. The seagull moved a few steps away from the crow, then turned and placed food in the open beak of the crow. 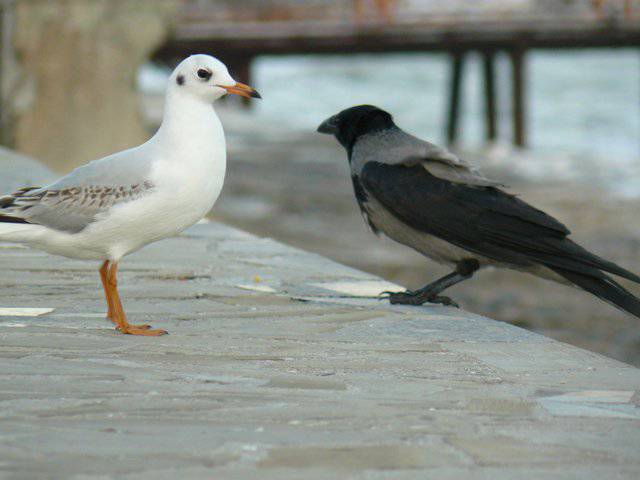 We were at a loss; I never saw a big gray gull feeding a crow. After eating, the birds took to the air again and circled the water surface of the river in a large circle. While they were flying, one of the terns fell into the water and jumped out with a decent fish in its beak. Then she flew up to the spot on the parapet, where the seagull and the crow had just sat, laid the fish down and flew away. After a moment, the seagull sat down near the fish's tern, pecked at it and swallowed. A crow that flew up to the gull immediately began to beg for food. But the gull turned away from the crow and walked along the granite parapet, the crow followed her. At the same time she stretched her neck and quietly croaked. The seagull stopped, turned to the crow and again gave her food as we had seen before. A woman with a man began to approach the place where the birds were sitting, they pushed in front of them a baby carriage where the baby was sitting. The birds rose and flew away, we never saw them again.

Having conducted my granddaughter to Moscow, I began to look for answers to this interesting history - friendship of gray gulls and crows, as well as the help of terns to them. One of the versions is this. In St. Petersburg, gray-eyed gulls began to nest on the flat roofs of buildings; sometimes crows also nest here. In other words, an urban “bird mini-bazaar” is formed, where its inhabitants protect each other, feed and live by laws that are not yet available to us. For some reason, the parents of the little raven we could have perished in the city for some reason, and then one of the blue-eyed gulls nesting alongside took on the role of one of the “parents”. There are many examples from nature, when completely different animals, birds, begin to make friends and take care of each other.

Creating radio navigation systems and controlling the navigation equipment of the Northern Sea Route, I have repeatedly visited Novaya Zemlya, many islands of the Arctic Ocean, Kamchatka, the Kuril Islands. Ground stations of radio navigation chains were installed here, therefore the presence of the head of development was obligatory. The government of the country and the leadership of the Ministry of Defense of the Russian Federation paid special attention to the work of the radionavigation systems. This is observed now. The fascinating picture of bird markets, the life of their inhabitants, ways to protect the chicks from predators did not leave the harsh my colleagues and subordinates indifferent when they perform their main work. Many of them, as I know, then shared with friends and relatives. I think their stories to their children and grandchildren about what they observed will remain forever in their memory.