Who benefits from unrest in Islamabad?

8 September 2014
14
The riots in Islamabad have been going on for almost a month now. Massive clashes with the police, dead, wounded, tear gas, rubber bullets, Molotov cocktails, stones, and a periodically renewed storming of the parliament - these are the days of the Pakistani Maidan, launched on August 14. Who benefits? 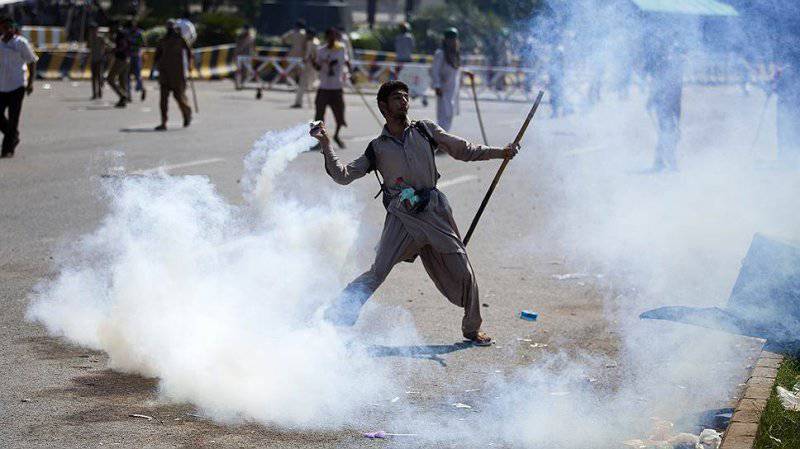 One of the biggest clashes in Islamabad happened on 31 August, on Sunday. Thousands of opposition supporters tried to storm the parliament building. The assailants threw stones at the guards and threw "Molotov cocktails", the police responded with tear gas and rubber bullets. The sad result: two (or three) dead and about five hundred wounded.

The demonstrators managed to seize the building of the national television of Pakistan. Earlier, the press notes, the protesters defeated the office of the PTV channel, where employees were beaten. Later, the headquarters of the channel special forces cordoned off. Now the channel continues to broadcast.

Judging by the passions, the opposition is not going to retreat. Five rounds of negotiations led to nothing.

The demands of the rebels are well known: the consolidated forces of the “opposition” in the form of supporters of Imran Khan (leader of the Pakistan Justice Movement) and religious leader Tahir Kadri (leader of the People’s Movement of Pakistan) support the resignation of Prime Minister Nawaz Sharif. The latter is traditionally accused of corruption. Also, the opposition believe that last year's elections, in which he came to power, were rigged.

The riots arose because Nawaz Sharif is not going to resign. In addition, he is supported by a majority in parliament.

However, there is an important nuance in the confrontation: the opposition turns to the military, and the army in Pakistan is openly hostile towards the government of Sharif.

1 September it became known that the police opened criminal cases against opposition leaders, who organized protests in Islamabad, which were about 30 thousands of people.

Imran Khan and Tahir Kadri were accused of treason, terrorism and acts of vandalism. Khan, in response, promised his supporters not to retreat until Sharif resigned. Moreover, he urged people to break through the barricades and participate in protests. According to him, God is on the side of the demonstrators.

“God wants us to confront the police,” Khan quotes. "Voice of America", - and you need to show the same determination that you showed earlier, despite the massive illegal police repression against peaceful demonstrators. "

As for the reaction of the army, it, dissatisfied with the government, made it clear that only things will get worse. The army commander, General Rachel Sharif, warned the authorities that further use of force by the government would "only increase" political unrest. The commander, who voiced the "democratic" position of the military, expressed concern about the political crisis and violence.

Voice of America notes that several local cameramen were injured as a result of police actions. The police pulled crew of workers from caravans and beat them with sticks.

However, the government meeting praised the steps taken by the police to destroy the intentions of the demonstrators.

In the meantime, let’s add to this, international terrorists from the gathering force of the Islamic State group are taking advantage of the unrest.

Militants of the IG began a "campaign" in the north-west of Pakistan. For the time being, they are distributing leaflets written in Pashto and Dari and calling for support of the grouping. Analysts believe that the IG may well spread its influence on the tribal territories located near the Afghan border.

The al-Qaida jihadists, too, are not idle. The unrest in Islamabad and the political instability in Pakistan are also used by them.

September 5 in the press have been reports that al-Qaeda is preparing to create a cell in Hindustan. In fact, Ayman az-Zavahiri intends to enter into competition with the IG.

In a video message, he said that al-Qaeda intends to fight for influence in Pakistan, India and Bangladesh. According to him, Hindustan - historical part of the Islamic world. The peninsula only needs to be freed from the European colonialists.

And then there are the Taliban. An army is conducting an operation against them.

Analysts say that the Pakistani military can take decisive measures to stabilize the situation.

Such a scenario is quite possible, since the army is hostile towards Sharif. Even if the current unrest can be calmed down through negotiations and temporary compromises, the position of the prime minister in power will be precarious. And at any time we can expect new unrest.

Political instability will certainly take advantage of the Taliban, the IG and al-Qaeda, which further undermine the government of Sharif.

Thus, if the protests in Pakistan play into the hands of terrorists, then they threaten the prime minister with the position of Yanukovych. It is obvious that the "Maidan" in Islamabad in the coming days will not subside.