27 September 2013
13
The absence of ZSU in the air defense of the troops, one of the saddest moments in stories Red Army. After the end of the Second World War in the USSR, the correction of errors was taken seriously. The most famous ZSU in the world was the Soviet ZSU-23-4 “Shilka”, but few people know that she had a stronger, sibling ZSU-37-2 “Yenisei”.


To replace the unfulfilled hopes of ZSU-57-2 armed with 57-mm Grabin guns with ring-loading, 17 in April 1957. guidance systems. This was our response to the adoption of the ZNU М426А211 in the USA.

Formally, Shilka and Yenisei were not competitors, since Shilka was designed to ensure 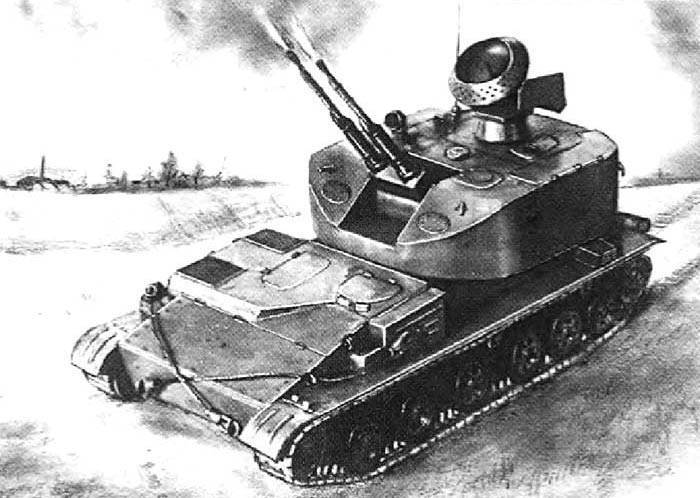 For the ZSU-37-2 in the OKB-43, the 37-mm Angara twin anti-aircraft gun was developed. It used two machines 500P, developed in OKB-16. "Angara" had a tape power system, a system of liquid cooling machines and tracking electro-hydraulic drives.

The “Angara” targeting was carried out with the help of the noise-free “Baikal” radar-instrumentation complex, created in the research institute-20 GKRE (Kuntsevo village). PKK "Baikal" worked in the centimeter wavelength range (about 3 cm).

Looking ahead, I will say - it turned out during tests that neither Tobol on Shilka nor Baikal on Yenisei could effectively search for an aerial target on their own. Therefore, even in the Council of Ministers resolution No. 426-211 of 17 of April 1957, it was planned to create and submit to the state tests in the second quarter of 1960 a mobile complex of the Ob radar to control the ZSU.

The Ob complex included the Neva command vehicle with the Irtysh target designation radar and the Baikal RPK located in the Yenisei ZSU. The Ob complex was to control the fire of six to eight ZSUs. By resolution of the Council of Ministers of 4 in July of 1959, the work on the Ob was stopped to speed up the development of the Krug anti-aircraft missile system.

The chassis for the Yenisei was designed in the Uralmash design bureau under the direction of G.S. Efimova on the chassis of an experienced SU-100P self-propelled unit. Its production was planned to expand on the Lipetsk Tractor Plant.

ZSU "Shilka" and "Yenisei" were simultaneously tested, albeit according to different test programs.

"Yenisei" had a zone of destruction in range and ceiling close to ZSU-57-2, and according to the commission on state tests "provided cover for tank forces in all types of combat, that is, air attack weapons for tank forces operate mainly at altitudes up to 3000 m ".

Normal shooting mode (tank) - continuous turn to 150 shots on the barrel, then break 30 seconds (air cooling) and repeat the cycle until the ammunition load is exhausted.

During the tests, it was found that one ZSU “Yenisei” outperforms a six-gun 57-mm C-60 cannon and a battery of four ZSU-57-2. 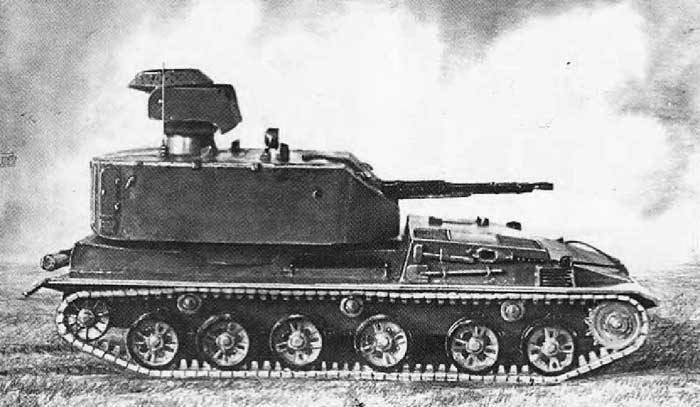 During the state tests from the gun "Angara" made 6266 shots. Two delays and four breakdowns were noted, which amounted to 0,08% of delays and 0,06% of breakdowns of the number of shots fired, which is less than permissible according to tactical and technical requirements. During the tests, the CDS (equipment for protection against passive interference) failed. The chassis showed good maneuverability.

According to the test results of ZSU “Yenisei”, it was proposed to use it to protect the army’s Krug and Kub anti-aircraft missile systems, since the Yenisei effective firing zone blocked the dead zone of these air defense systems. 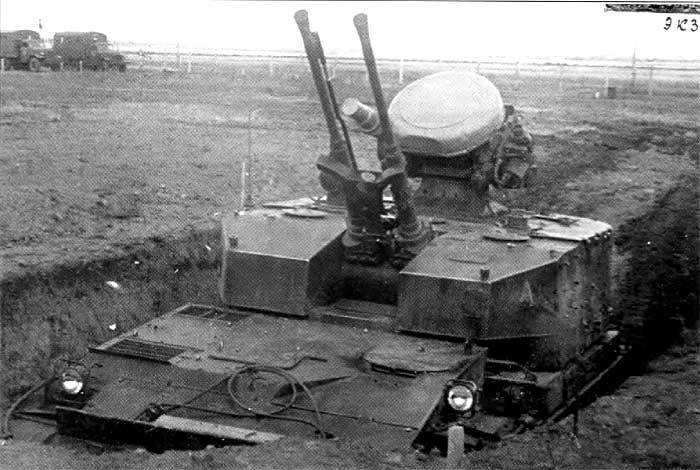 After the state trials of "Shilka" and "Yenisei", the state commission examined the comparative characteristics of both ZSU and issued an opinion on them.

I will give some excerpts from the conclusion of the commission:

- “Shilka” and “Yenisei” are equipped with a radar complex and provide shooting day and night in any weather.

- The weight of the Yenisei 28 tons, which is unacceptable for armament of motorized rifle units and airborne forces.

"Yenisei" is designed for air defense tank regiments and tank divisions for the following reasons:

- Tank units and formations operate mainly in isolation from the main group of troops. "Yenisei" provides escort tanks at all stages of battle, on the march and on the field, provides effective fire at altitudes up to 3000 m and ranges to 4500 m. This installation virtually eliminates accurate tank bombing, which Shilka cannot provide.

- There are quite powerful high-explosive and armor-piercing shells, the Yenisei can conduct more effective self-defense shooting at ground targets while following in combat orders of the tank forces.

Unification of new ZSU with products in mass production:

According to "Shilka" - 23-mm machine gun and shots to it are in mass production. The tracked base SU-85 is manufactured at MMZ.

According to the “Yenisei” - the PKK is unified in modules with the “Krug” system, on a tracked base - from the SU-1 OOP, which 2 — 3 of the plant are preparing for production.

As in the above extracts from the test reports and the conclusion of the commission, and in other documents, there is no clear justification for the priority of “Shilka” in comparison with the “Yenisei”. Even their cost was comparable:

The Commission recommended the adoption of both ZSU. But the decision of the Council of Ministers of 5 September 1962, the number 925-401 was adopted by one "Shilka", and 20 September of the same year followed the order of the CCFOT to stop work on the Yenisei. According to some reports, refuse to work on the "Enisey" N.S. Khrushchev was convinced by his son Sergei. An indirect proof of the delicacy of the situation was that two days after the work on the Yenisei was closed, an order was issued to the GKOT on the same remuneration of the organizations that worked on the Yenisei and Shilka.

Control system and guidance - 1А11 "Baikal" radar sighting system with 1RLX34 radar and a television-optical viewfinder developed by SRI-20 GCRE. Unified on the basis of equipment modules with the “Krug” air defense system. According to the results of acceptance tests of the prototype (10 of August 1961 completed), it was noted that the equipment for protection against passive interference was not debugged. When working on low-flying targets, the accuracy of the RLPK is higher than that of the SON-9А radar.
The detection range of a MiG-17 type target is the average degree in the 30 sector - 18 km
The range of tracking the type of the MiG-17 maximum - 20 km
Vertical target tracking speed - up to 40 degrees / s
Maximum target speed:
- 660 m / s with flight altitude more than 300 m
- 415 m / s with flight altitude 100-300 m
Time of transfer to combat readiness from the preliminary readiness mode - 10-15 sec
Continuous operation time without changing parameters - 8 hours
Time between failures radar - 25 hours (according to the results of state tests)
Time between failures RLPK - 15 hours (according to the results of state tests, the requirements of TTT - 30 hours) 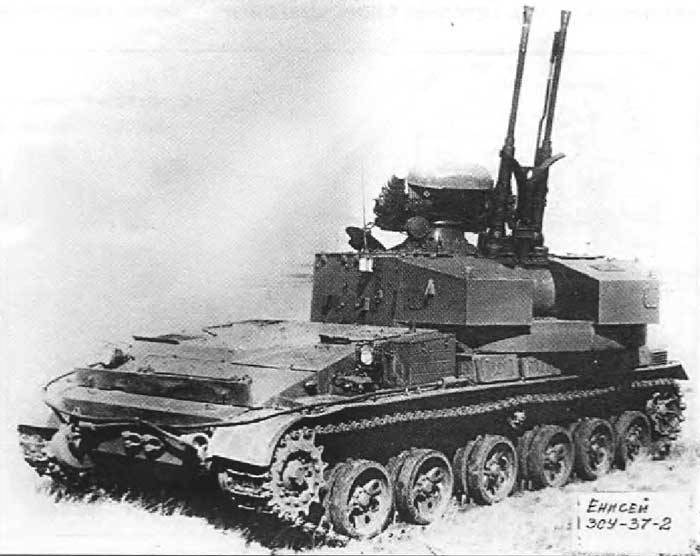 The USSR Council of Ministers Decree No. 426-211 of 17 on April 1957 provided for the creation of a mobile radar target detection and targeting system “Ob” with the transfer of the complex for testing in April-June 1960. The complex “Ob” included the command vehicle “Neva” radar targeting "Irtysh" with the connected PKK "Baikal" ZSU. The Ob complex was supposed to control the 6-8 ZSU Yenisei fire. The development of the Ob complex was discontinued by the Resolution of the Council of Ministers of the USSR 4 July 1959.
Wavelength range - centimeter (approx. 3 cm)

Booking is bulletproof (protection of the ammunition location from 7.62 mm bullet B-32 from the distance 400 m was provided).

The probability of hitting a target like the MiG-17 at speeds of 250 m / s at different heights (obtained by calculating the errors that are accepted by the developer for the serial manufacturer):

Shooting accuracy when driving on a tank test site at a speed of 8-10 km / h on 25% lower than when shooting from a place. The accuracy of shooting at 2-2.5 is higher than that of the C-68 cannon.

Ammunition: 540 shots (600 shots on TTT). The 500Ps were original 37-mm assault rifles and are incompatible with other 37-mm cannons for ammunition (except for the serially produced Squall - 37-mm quadruple Shkval anti-aircraft gun, 4 of the 500-Squall, developed by the 43-4 squared gun, developed by the XKUMX, 34 of the 116-automatic machine. after its liquidation - TsKB-49. The “Shkval” cannon was accepted for serial production by the Resolution of the CM No. 09.02.1959-500 from 525. The 156P machine gun was manufactured by Izhevsk plant, and the gun by the plant # 57. The production of the Shkval gun was discontinued by the CM Resolution N ^ 11.02.1960-XNUMX from XNUMX g.).

Equipment: the power supply was provided by the NAMI gas turbine electric generator, which ensured quick availability for operation at low temperatures; there is no anti-nuclear protection of the crew. Radio station - P-113. The night observation devices of the commander and driver are TKN-1 and TVN-2.

ZSU-37-2 modified - installation design improvements were started in 1962, the chassis was modified with the addition of the 7 roller, a new small-scale track with RMSH pitch and 110 track pitch was made, and changes were made to the hull. A set of documents has been deposited.

The distance between the centers of the leading rollers - 6195 mm
Base - 4705 mm
The ZSU object 130 is a technical project of the ZSU developed by the OKB-3 plant of the Uralmash plant, the chief designer is PPVasiliev. The project was completed in 1960. The ZSU engine-transmission compartment is unified with the T-54 and T-55 tanks. Engine location transverse. The prototype was not built.