Eurozone debt crisis - the work of the United States 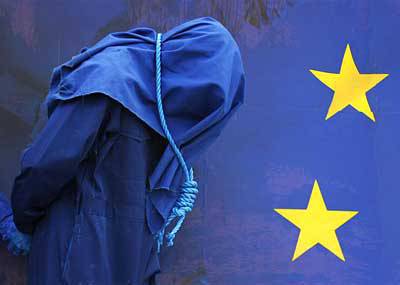 According to the expert, what is happening resembles military operations in the field of global finance.


The interested world community stood still anxiously awaiting the results of the emergency “Euroconcilium”, which is planned to be held in Brussels in order to determine the further treatment tactics of the “sick man of Europe” (by analogy with the well-known definition assigned to the evil languages ​​of the Ottoman Empire in the XIX century). In its capacity at the present time, the economy of Greece, entangled in debt, as in silk, appears, about which we can soon say: "Everything was here, and now it is only a default."

However, as it is not hard to guess, the leaders of the countries that rushed to the bureaucratic capital of the European Union in an emergency mode (they say that the German “Chancellor” Angela Merkel on this occasion even had to interrupt her African foreign policy “safari”) were not so much a general humanitarian concern about financial well-being. ” cradles of the European civilization ”, which can go under the hammer for debts accumulated by the Greeks not without the active help of the“ European Communal neighbors ”. In this case, the European elite is much more concerned about their own selfish interest, namely, the fate of the main achievement of European integration in the form of the eurozone, which is already beginning to burst at the seams with each new message about the possible cut-off of the “suffering Greek member” (i.e. ). Since if in the current situation Brussels does not give Athens a helping hand, then he risks “stretching his legs” when the financial crisis spreads to other eurozone countries.

Moreover, as is now accepted in the “civilized family of European nations”, the final decision, to lower or continue to inflate the “financial bubble” of the credit pumping of Greece, was given to France and Germany — the two main sponsors of the European project (or, one can say, the most wealthy "Elder brothers"). On the eve of the summit of EU heads, Angela Merkel and Nicolas Sarkozy staged a Franco-German get-together, meeting behind closed doors to, in effect, “figure out for two” the fate of Greece. After the completion of the round of negotiations, the two euroweights, who managed to find common points of contact, reported (in the spirit of “we conferred and the European Union decided”) that the Greek financial Armageddon was temporarily postponed.

Apparently, the role of the sponsor of the next monetary “oxygen cushion” for the hopelessly ill Greek economy will once again be assumed by Germany, whose recent chancellor has increasingly to answer the sore question: “Where is the money, Zin?” (I.e. , in this case, Angel). However, in addition to Germany and France, private lenders of pre-default Hellas also voluntarily-compulsoryly signed their participation in the mission under the code name “Rescue an ordinary euro”. According to the Financial Times, the agreed plan of action may include the receipt of? 71 billion from global lenders and? 50 billion from private. The collected funds will go towards partial repayment of the total Greek debt of? 350 billion. In turn, the exchange of bonds held by private companies for new Athens 30-summer bonds could reduce the debt by another? 90 billion. In addition, the European media "delighted" the local " fat cats ", which, according to available information, the European fiscal authorities plan to impose a" banking service "in order to raise funds to refinance the" poor Greek relative. "

The effectiveness of a prescription written by European leaders for the treatment of a sick Greek economy, in an interview with KM.RU, commented on well-known Russian economist Andrei Kobyakov:

- Honestly, I believe that Greece needs to be defaulted, otherwise this situation becomes not just chronic, but even worsening. Last year, Greece was rescued from default, but since then, the situation there has not only not improved, but even worsened. This indicates that the Greeks either do not want or cannot solve their problems.

By the way, I do not rule out that they simply do not want to do this. It is known that Greece has assets to be privatized, for a total of? 300 million. This amount can plug the entire debt hole of this country, but the Greeks are not in a hurry to do this. They do not want to part with their property. It turns out an ugly situation: they want to live in debt, but they are not going to pay. If Greece is not defaulted, it means the continuation of its support at the expense of the strong countries of the eurozone, primarily Germany. Naturally, indignation is growing among the Germans about this. Say, how many more can you have dependents? And in Greece, millions come out for demonstrations and declare: “But we don’t want to pay!” The pathos of these demonstrations is not completely clear to me: if you want to live well, learn to “carry the sleigh”. In this sense, the situation is quite running.

On the other hand, there is the project of the euro, which is much more dear to the heart of the inhabitants of old Europe than this or that debt problem of an individual EU member, all the more so not so significant on a European scale, like Greece. And yet, in my opinion, it would be wiser to make a surgical decision. At least, temporarily bring Greece out of the eurozone, return the national currency and produce a full default. That would be a sensible and correct decision. However, the Europeans, apparently, will not decide on this and will continue to refinance Greek debt. At the same time, what is restructuring with the involvement of private banking structures and investors in this process? In any case, this means partial default. Given the plan proposed by the Alliance Insurance Group, according to which the order of? 50 billion should be written off by creditors. By and large, this is not a total, but partial default. So in some degree or other defaulting of Greece is inevitable.

The problem is not so much directly in Greece, but in the fact that the crisis spreads throughout the European association. For example, in recent weeks Italy's bonds have reeled sharply. Their price went down, and the yield, respectively, went up, which indicated an exacerbation of the problem and a decrease in the Italian government’s ability to carry out new loans. That is, in essence, we see how the crisis begins to spread to large countries in the eurozone. The question is, what, 120% of the national debt to Italy's GDP is some kind of new problem? No, exactly the same 120% were at the time when Italy entered the Eurozone in the 1998 year. So in this sense the situation has not changed, or at least has not worsened for this country.

A natural question arises: why is it that all this excitement has arisen right now? First, it indicates the panic nature of many processes on the exchange. That is, objectively, we cannot state the situation associated with the debt crisis in Italy, but psychologically it develops in a clearly unfavorable way. Secondly, behind all events, most likely, there are completely conscious attacks by speculators and actions of mainly American rating agencies, which are beginning to warn about the possibility of lowering the sovereign rating of Italy, etc., etc. I see behind it all real "financial debt war" between overseas and European "comrades". In fact, the question is about who is turning the arrows on whom.

It is clear that the most significant problem of the world community is the US debt crisis. At the same time, in order to distract public opinion, the European crisis is being artificially inflated. Of course, one can talk about the threat of the euro, but in this case one should speak not only about the objective component, but also about the subjective element. Here we are dealing with a clearly defined externally controlled (frankly, from the US) eurozone debt crisis. In essence, these are military operations in the field of global finance. I wrote about this a year ago in the article “The Euro in the Trenches,” published in the journal However. Watching the events, it is difficult to get rid of the idea that you are reading reports from the front.

Of course, for Europe, this situation is serious, I would even say critical. It is therefore fundamentally important that European countries demonstrate unity in position and less indulge in squabbles. Some analysts are talking about the supposedly existing opportunity to “forgive” a part of Greek debt. In this case, the same private banks will have to show losses in their balance sheets, which, in turn, is related to the size of the capital of these structures, which affects their reliability and creditworthiness. That is, before you write off, you need to strengthen the capital base of the main holders of the Greek debt. This, in any case, is not a free offer. It's not like just take and forgive. It will be necessary to recapitalize the banking system of Europe - either by making a decision on the issue of money, or else it will be necessary to look for sponsors of this action. It can only be sponsored by all the same France and Germany ... In any case, we return to where we started: the developed countries will have to pay for the debts of the Greeks.

We are in Yandex Zen
The world we leave, the world we enter, and the world between them
Overcoming the crisis - the dismantling of the Eurozone
2 comments
Information
Dear reader, to leave comments on the publication, you must to register.